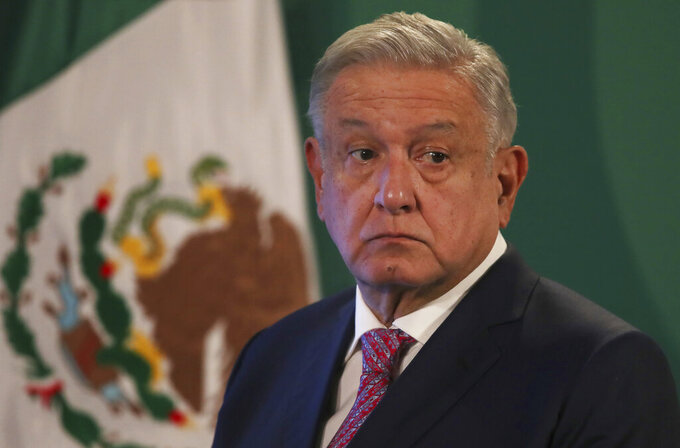 FILE - In this Feb. 8, 2021 file photo, Mexican President Andres Manuel Lopez Obrador gives his daily morning press conference following a two-week absence after he tested positive for the new coronavirus, at the National Palace in Mexico City. The Mexican leader has refused to mandate mask wearing or a declare any lockdown. And his obsessive drive to slash government spending may have contributed to the safety downgrade, which apparently involved insufficient staffing and oversight at airports. Lopez Obrador lashed out on both fronts Thursday, May 27, 2021, criticizing other governments rather than recognize any Mexican shortcomings. (AP Photo/Marco Ugarte, File)

MEXICO CITY (AP) — Mexico is just starting to recover after a coronavirus death toll nearing 350,000, and the vital tourism sector was hit this week by a downgrade of Mexico’s aviation safety rating.

The Mexican leader has refused to mandate mask wearing or a declare any lockdown, policies that critics say increased Mexico’s death toll. And his obsessive drive to slash government spending may have contributed to the safety downgrade, which apparently involved insufficient staffing and oversight at airports.

But López Obrador lashed out on both fronts Thursday, criticizing other governments rather than recognize any Mexican shortcomings.

“During the pandemic, authoritarian instincts flowered, ‘Stay at home, don’t go out, curfew, don't go out for a walk,' ” López Obrador said, in an apparent reference to strict lockdowns that helped contain outbreaks in Europe and other parts of the world.

“Mediocre officials felt very important, imposing their will,” he continued, noting Mexico had encouraged, but never forced, people to stay at home, arguing that many here couldn't afford to do so.

López Obrador also refused to wear a face mask except when on airplanes, and his top officials cast doubt on their usefulness. Mexico's test-confirmed deaths now stand at over 222,000, but because the country of 126 million people does so little testing, the government's own estimates of excess deaths related to COVID-19 now stand at over 348,750 — among the highest per capita rates in the world.

But López Obrador brushed off criticism with what has become one of his favorite phrases, borrowed from the 1968 Paris student protest movement: “It is forbidden to forbid.”

The pandemic took a terrible toll on the country's economy, and López Obrador had predicted a rapid, V-shaped recovery. But data released this week showed that in the first quarter, Mexico's economy grew by an anemic 0.8%, far below the 3.2% growth in the fourth quarter of 2020.

There was more economic bad news this week, especially for the tourism sector, which is Mexico's third-largest money earner after manufacturing exports and money sent home by migrants.

On Tuesday, U.S. regulators downgraded Mexico’s aviation safety rating, a move that prevents Mexican airlines from expanding flights to the United States and restricts U.S. carriers from selling tickets on Mexican partner airlines just as travel is recovering from the pandemic.

The Federal Aviation Administration made the decision after finding that Mexico does not meet standards set by a United Nations aviation group.

Mexico’s Communications and Transport Department suggested that low staffing due to the coronavirus pandemic — which cut flights drastically — may have played a role in the FAA decision.

It was unclear if the low staffing levels were due to employees calling in sick or being furloughed during the pandemic. But some analysts say it was also due to López Obrador's cost-cutting measures.

López Obrador fired back Thursday, suggesting the U.S., not Mexico, was to blame.

“There are some countries that feel like they govern the world. They set themselves up as juries to judge everything,” López Obrador said.

He brushed off experts' suggestions of damage to Mexico's domestic airlines, some of which were driven into bankruptcy or refinancing by the pandemic.

“The domestic market has enough demand,” López Obrador said. “The domestic airlines are not going to have any problem.”