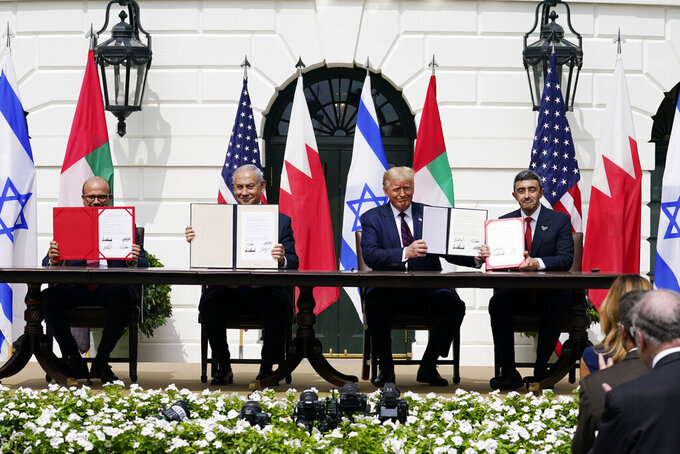 But the UAE has been mostly muted — and perhaps unimpressed — in response to Netanyahu’s ebullient descriptions of billions in Emirati commercial investments and promises of a historic meeting with the powerful Abu Dhabi crown prince. One Emirati official said the federation will not get involved in Israel's electioneering, “now or ever."

The conflicting signals from the countries, which normalized relations in a breakthrough U.S.-brokered agreement last fall, have set off a firestorm of speculation, highlighted the political differences between the sides and undermined Netanyahu’s talking points about the Gulf Arab sheikhdom's friendly embrace.

Locked in a tight re-election battle, Netanyahu repeatedly has tried to score a lightning trip to Abu Dhabi, the capital of the UAE, to brandish his diplomatic achievement. The visit promised little of substance beyond a valuable photo-op for Netanyahu, who has sought to present himself as an indispensable statesman uniquely qualified to turn Israel’s enemies into allies and guide his nation through turbulent times.

After coronavirus restrictions foiled his plans several times, Netanyahu attempted a hasty visit last Thursday, only to call it off at the last second. In an embarrassing setback, he said Jordan had refused to allow him to fly through its airspace after disagreements over security arrangements prevented a private visit to Jerusalem by Jordan’s crown prince.

Emirati officials were mostly silent, a response that appeared to mask an undercurrent of behind-the-scenes pushback.

A rare exception was Anwar Gargash, an Emirati presidential adviser who until last month served as the minister of state for foreign affairs. “The UAE will not be a part in any internal electioneering in Israel, now or ever,” Gargash wrote on Twitter.

“From the UAE’s perspective, the purpose of the Abrahamic Accords is to provide a robust strategic foundation to foster peace and prosperity with the State of Israel and in the wider region,” he wrote, referring to last year's agreements that saw four Arab countries establish ties with Israel.

Struggling with an ongoing corruption trial and popular outrage over the economic fallout of the pandemic, Netanyahu has sought to focus the spotlight on the historic deals, the so-called Abraham Accords.

In his speeches and interviews this week, Netanyahu vowed to reschedule the Abu Dhabi trip. He dangled the promise of normalization with four more Arab countries, without naming them. He told reporters that the UAE had pledged to invest $10 billion in Israel.

The UAE’s state-run news agency WAM confirmed last week that the Abu Dhabi crown prince, Mohammad Bin Zayed Al Nahyan, had discussed with Netanyahu the establishment of a $10 billion fund to invest in Israel’s “strategic sectors,” ranging from energy and space to healthcare and agriculture.

But days later, following Netanyahu’s media blitz, Sultan al-Jaber, the Emirati Minister of Industry and Advanced Technology, seemed wary of moving too fast. According to UAE state-linked newspaper The National, al-Jaber emphasized that the UAE’s investment plans “are in the very early days” and tried to wipe out any associations with Netanyahu and his re-election campaign.

“We are at a very early stage in studying the laws and policies in Israel,” he said. “The $10 billion is commercially driven and not politically associated.”

He added, vaguely, that the “UAE has a long history and rich track record in making the right investments in the right locations, based on the commercial assessment of that market.”

As Netanyahu tried to wrangle a high-profile visit, plans for a more subdued diplomatic visit from Israel were underway. Israeli Foreign Minister Gabi Ashkenazi, a member of the rival Blue and White party, was scheduled to fly to the UAE earlier this week to inaugurate Israel’s new embassy in Abu Dhabi.

But Netanyahu called off the visit at the last minute, said an Israeli official, speaking on condition of anonymity because he was not authorized to discuss the issue with the media.

Israeli media reported that Netanyahu deprived his political rival of the visit because he wanted to be the first Israeli leader to be photographed at a ceremony in the UAE.

Ben-Dror Yemini, a senior columnist at Israel's Yediot Ahronot daily, said unnamed Emirati officials told him they were stunned by the decision to cancel Ashkenazi’s visit.

“Netanyahu’s action is a negative sign,” Yemini wrote. “It may get (the Emiratis) to look at Israel slightly less positively."

The Emirati Ministry of Foreign Affairs did not respond to repeated requests for comment from The Associated Press. Netanyahu's office declined comment when asked about Ashkenazi's canceled trip.

On Wednesday, Netanyahu confirmed to an Israeli radio station that he would not be flying to Abu Dhabi before next week's election after all.