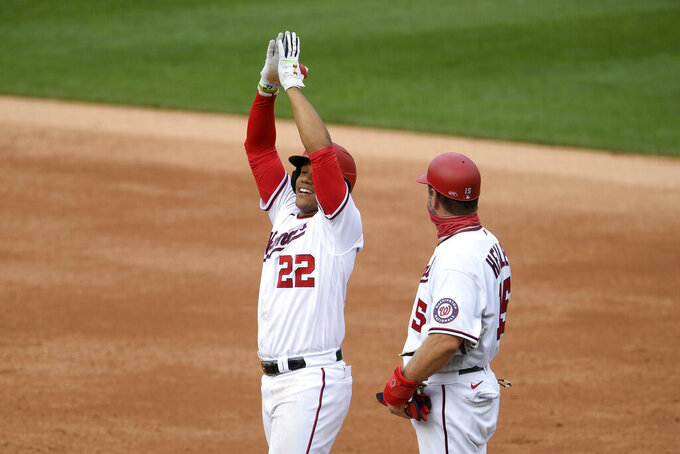 Washington Nationals' Juan Soto (22) reacts at first after his single during the second inning of a baseball game against the New York Mets, Sunday, Sept. 27, 2020, in Washington. Also seen is Nationals first base coach Bob Henley at right. The Nationals won 15-5. (AP Photo/Nick Wass)

The 2020 baseball season began with Juan Soto testing positive for COVID-19. Now, he's a 21-year-old batting champion — after beating out another player who went through his own ordeal with the coronavirus.

Perhaps it was fitting.

Soto finished atop the National League with a .351 average Sunday, becoming the youngest person to win the batting title in the NL. The Washington outfielder outlasted Atlanta's Freddie Freeman, who hit .341. The fact that either player was in a position for this type of accomplishment was emblematic of a regular season that felt chaotic and uncertain at times — but ultimately reached the finish line.

Soto missed baseball's season opener between the Nationals and New York Yankees back in July, but he ultimately played in 47 games and was one of few bright spots as the defending champions struggled. Freeman played in all 60 games for the Braves, but only after a scary battle with COVID-19. He said he had a fever of 104.5 degrees and prayed for his life.

There have been other sobering moments as well. Boston pitcher Eduardo Rodríguez missed the whole season after coronavirus follow-up tests showed a heart issue.

But although it seemed initially that the season might fall apart because of postponements and positive tests, every team except St. Louis and Detroit managed to play the full 60 games. The Cardinals and Miami Marlins — the two teams hit particularly hard by the virus — both made the expanded postseason. Teams played shortened doubleheaders and the extra-inning rules were different, but in some small ways this season did feel at least a little bit normal.

The Los Angeles Dodgers had the best record in baseball — no shock there. Trea Turner led the major leagues in hits, Jose Abreu topped the list in RBIs and Adalberto Mondesi had the most steals. Mike Trout was phenomenal, but his team didn't make the playoffs.

None of that would have seemed out of the ordinary in a 162-game campaign.

The postseason, now with 16 teams, could create its own wacky outcomes. The Milwaukee Brewers haven't spent a day above .500 this year, but they're now a well-timed hot streak from a pennant or even a World Series title. What happens over the next few weeks will go a long way toward determining how this season is remembered — and how fluky it ends up feeling.

For now, baseball can be relieved to have made it this far.

It was another disappointing season in Philadelphia. The Phillies lost seven of their final eight games and missed out on the postseason. In the NL, only Colorado had a worse ERA than Philadelphia's 5.14 mark.

Luke Voit of the New York Yankees led the majors in home runs with 22. Who are the most recent players to lead baseball in homers with a lower total than that? (There are two players who did it in the same year. One is a lot more famous than the other.)

Alex Gordon played the final game of his 14-year career with the Kansas City Royals on Sunday. Gordon was pulled after one inning, and although he wasn't able to say goodbye to a ballpark full of fans, the rival Detroit Tigers gave him some applause. Kansas City drafted Gordon in 2005 with the No. 2 overall pick, and he eventually helped the Royals win a pennant in 2014 and a World Series in 2015.

LINE OF THE WEEK

In 1918, Babe Ruth and Tilly Walker tied for the major league lead in homers with 11. Ruth was still pitching regularly for the Boston Red Sox at that point, and at the end of the 1918 season, Walker actually had a 29-20 lead on Ruth in career home runs.