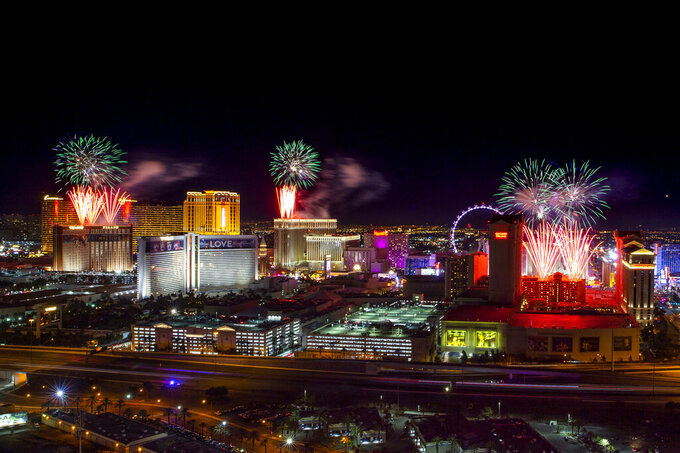 FILE- IN this Jan. 1, 2020 file photo, fireworks for New Year's Eve erupt over the Strip as viewed from the VooDoo Rooftop Nightclub & Lounge at Rio All-Suite Hotel & Casino on in Las Vegas. If ever a year's end seemed like cause for celebration, 2020 might be it. Yet the coronavirus scourge that dominated the year is also looming over New Year's festivities and forcing officials worldwide to tone them down. (L.E. Baskow/Las Vegas Review-Journal via AP, File)

LAS VEGAS (AP) — Thousands of revelers were on the casino-lined Las Vegas Strip Thursday despite a plea from Nevada's governor that people reconsider their plans to go out and celebrate New Year's Eve amid the pandemic.

While shopping, gambling, drinking yard-long frozen cocktails and gawking at the sights and lights, most everyone who went out in Sin City was wearing a face mask, though some wore them only half-covering their face.

Amer Zah and Rayif Bah, both 22-year-old college students from Louisiana State University, were strolling the sidewalks outside the resorts and taking pictures. The two men had been on a cross-country road trip and after visiting Seattle, decided to head south to Las Vegas to ring in 2021.

“We wanted somewhere to spend New Year’s and Vegas seems like the perfect place,” Zah said.

But with most of the clubs still closed, live entertainment canceled and a signature fireworks show scuttled, they weren't sure how they would spend the rest of their evening, but both said they felt safe and had seen few people not wearing masks.

“It’s not as much as we expected,” Zah said. “We might just be walking around.”

“Everyone, I think, is taking it seriously,” Bah said.

Chanel Griggs and Layena Williams, two street performers costumed in black lingerie, tiaras and purple and white showgirl feathers, said New Year’s Eve is one of their most lucrative nights as they pose for photos with tourists on sidewalks and collect tips.

When in costume, they don't wear masks if they're outside and will let those posing for a picture remove their face coverings as well, which Griggs called “a courtesy.”

“It’s very busy and there’s a lot of people, like drunk people. They give us more money than they usually would. So that’s why we all come out,” Griggs said.

COVID-19 — blamed for more than 1.8 million deaths worldwide, including over 3,000 in Nevada — has wreaked havoc on the gambling mecca’s tourist-dependent economy. The state’s unemployment rate has been among the worst in the nation since the pandemic started and set an all-time record for any state when it topped 30% in April.

Typically, New Year’s Eve is one of the biggest parties Las Vegas sees all year, with more than 330,000 revelers, almost all hotel rooms booked and hundreds of millions of dollars pumped into the local economy.

In recent years, the night has been branded “America’s Party,” featuring live entertainment and concerts from big names like Lady Gaga and Journey, extravagant parties at nightclubs and bars, and a choreographed fireworks show launched from the roofs of casino-resorts on the Las Vegas Strip.

But this year, New Year’s Eve was scaled down.

The fireworks show was canceled, replaced by a virtual celebration, implosion of a “2020” sign and a pyrotechnic show 15 minutes before midnight on www.VisitLasVegas.com.

The Las Vegas Convention and Visitors Authority would not forecast what visitor numbers or room occupancy might be this year, with casinos-resorts limited to 25% capacity and public gatherings capped at 50 people. Las Vegas police said they too were unable to estimate what the turnout might be but guessed it could be as many as 200,000.

The Fremont Street Experience, a downtown casino-mall, initially planned to charge up to 14,000 guests $25 each to walk its six-block corridor on New Year’s Eve. The plans sparked pushback from state and county officials, who said such a large gathering could risk spreading the virus and overwhelming hospitals.

Organizers took tickets offline Wednesday evening and announced Thursday that they would restrict access to the public and only allow guests of surrounding hotels on the street after 6 p.m.

The mall’s public relations representative, Cassandra Downs, said the last-minute decision was made in consultation with health officials and that anyone who had purchased a ticket would be refunded.

Griggs, dressed as a showgirl, said she and other street performers were out of work for months when casinos were closed for about 11 weeks. When they finally came back to working on the Strip, business was slow until Christmas Eve.

Williams said she was hoping for things to get back to normal in 2021.

“Just a new beginning,” Williams said. “Hope we get rid of ’rona because it’s annoying.”

Sam Metz, a corps member for the Associated Press/Report for America Statehouse News Initiative, contributed to this story.