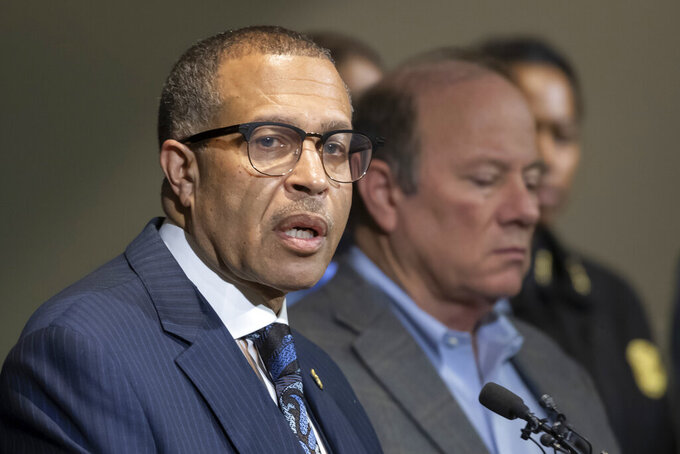 FILE - In this Nov. 21, 2019, file photo, Detroit Police Chief James Craig, left, speaks to the media at Detroit Public Safety Headquarters in Detroit. Craig has scheduled a news conference Monday May 10, 2021, to announce his retirement as head of Detroit's police department and to possibly discuss his future plans which could include a run for political office. (David Guralnick/Detroit News via AP, File)

DETROIT (AP) — Detroit police Chief James Craig announced Monday that he will retire as head of the city's police force, but he did not immediately reveal his future plans, which could include a run for political office as a Republican.

Craig, who has had the longest tenure of any recent Detroit police chief, said his retirement is effective June 1 and is voluntary.

He was hired in 2013 by an emergency manager after the state assumed control of the financially broken city. Craig, who is Black and a native of the city, immediately set out to restore residents’ confidence in the Detroit Police Department, which had a history of civil rights abuses by officers against the city’s mostly Black population.

Mayor Mike Duggan told reporters that Craig has “brought professionalism to the department.”

“I tried to convince him to stay, but I couldn’t persuade him. He gave eight good years of service and I wanted to be here to say, ’Thank you,’” Duggan said at the news conference where Craig announced his retirement.

Some Republicans have said they hope Craig challenges Democratic Gov. Gretchen Whitmer, who is expected to seek reelection in 2022. Craig said Monday that he is a Republican but that he has not made a decision about seeking political office.

Detroit has had about a dozen police chiefs since the early 1990s, including five in the previous five years before Craig was hired. Several were forced out amid allegations of wrongdoing.

Before taking the Detroit job, Craig was Cincinnati’s chief starting in 2011 after being hired in 2009 to lead the Portland, Maine, Police Department. Craig served 28 years in Los Angeles after starting his police career as an officer in Detroit in 1977.

Craig, 64, has railed against the number of illegal guns on Detroit streets while being an outspoken proponent of the Second Amendment. Following a number of justifiable shootings or those done in self-defense, Craig said in 2014 that Detroit residents had the right to arm themselves as a form of protection.

“Detroiters are fed up,” he said at the time. “They’re fed up with violence. I’m not encouraging violence, and in fact, I’m about the business of identifying those violent perpetrators that carry illegal guns.”

He also has pushed back against calls for cities to defund police departments following last May’s death of George Floyd in Minneapolis, which led to protests around the U.S. against racism and police brutality that at times turned violent. Demonstrations in Detroit were largely peaceful, but the city was sued by activists who said officers used excessive force against protesters.

Craig’s retirement is “good for the people, good for the city,” said Kenneth Reed, spokesman for the Detroit Coalition Against Police Brutality, which often has been critical of the department and how officers have treated residents.

“He came in early on and he encouraged people to arm themselves,” Reed said. “He did not have a crime-fighting plan and never had.”

To date, five Republicans have formed gubernatorial campaign committees. All are lesser-known candidates without major government or political experience.

“Chief Craig would bring a whole new level of leadership that is exciting,” said Meshawn Maddock, co-chair of the Michigan Republican Party.

Others considering whether to run include businessman and Iraq War veteran John James, the GOP nominee for U.S. Senate in 2020 and 2018, and businesswoman Lena Epstein, who ran for a suburban Detroit congressional seat in 2018.

Whitmer, who won by 9 percentage points in 2018, has not officially announced plans to run again, but she had $3.5 million in her campaign account as of Dec. 31.

Republicans see Whitmer as vulnerable next year amid fierce criticism from conservatives over her handling of the coronavirus pandemic. Republicans hope a strong candidate from Detroit could peel away some votes in the Democratic stronghold, where Whitmer received about 94% of the vote in 2018.

Sam Riddle, political director of the Michigan National Action Network and local radio host, said Craig has “loads of political capital” as well as “world class communication skills” that he could use to persuade voters.

“Craig will attract a statistically significant number of votes from Detroit even if he runs as a Republican against (Whitmer),” Riddle said.

Adolph Mongo, a Detroit-based political commentator, said the governor should be worried.

“We got a lot of conservative folks in our community. The people who are affected by crimes — how many funerals are people going to every week? Kids getting shot. He’ll get some votes. People see him on TV and say he’s trying.”