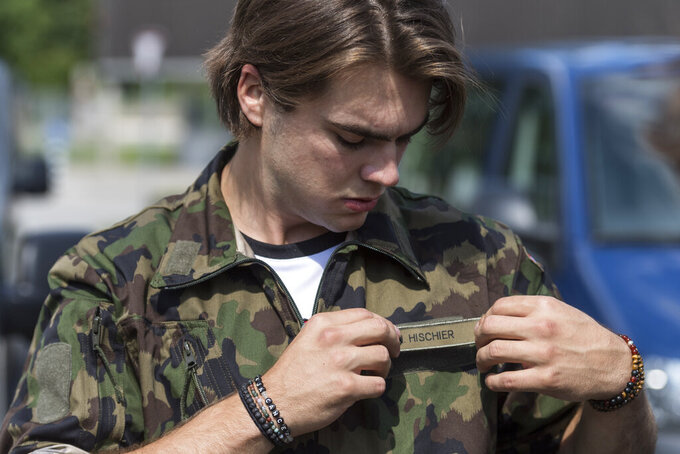 With the New Jersey Devils missing out on the NHL's 24-team return from the pause caused by the novel coronavirus, center Nico Hischier is putting his extended offseason to good use.

The No. 1 overall pick in the 2017 draft is fulfilling his military obligation to Switzerland, which has a mandatory 18-week service for men followed by three-week stints over the next six or seven years.

Hischier had thought about fulfilling it during the season, but with the Devils uncertain when they would return from the pause, it turned out to be the perfect option.

“One reason I did it was I needed to stay in shape,” Hischier said Saturday on a Zoom call. "I didn't know where to go because gyms weren’t open and I couldn’t just work out at home. I just didn’t have the tools for a good workout there. For a couple weeks it worked, but I felt like I needed to go somewhere to be prepared when we had to go back and play again. Then the army came and they had a great solution because where I’m working right now, that’s a great building. They have everything there you need."

The 21-year-old Hischier is in a special program for athletes, although the first four weeks of classes were held remotely because of the virus. He is now attending classes to learn emergency medical techniques, among other things, in the mornings and working out with fellow athletes in the afternoon, including some hockey players from the Swiss national team.

He is not learning how to march or drive a tank, and he's not heading to the firing range to shoot an automatic weapon. The soldiers in Switzerland's professional army do that.

Hischier does get a uniform and there are rules to follow. He works five days, goes home and returns the following week. He does not have a rank — yet.

"We didn’t do much army stuff yet,” Hichier said, although he expects jt will increase by the time he finishes in mid-August.

Hischier is coming off what he considers a disappointing season. Like most of the Devils, he played well after a bad start led to the firing of coach John Hynes and general manager Ray Shero. He finished with 14 goals and 22 assists in 58 games. New Jersey posted a 28-29-12 record, finishing 12-5-4 in the last 21 contests under interim coach Alain Nasreddine.

"Obviously, it wasn’t a year that we expect," Hischier said. “A lot of things happened, obviously, with all those changes. It wasn’t easy. I think the biggest thing for us was that we had a really bad start. It’s always frustrating and not easy when you’re down in the standings and you have to catch up.”

Hischier felt he took a few steps forward in his third season, but the team's lack of success took away from that.

With the late-season trade of defenseman Andy Greene, Hischier is open to the idea of replacing him as the Devils' captain next season. He was an alternate captain this season.

“At the end of the day, I’m still a young player," Hischier said. “I still got a long, long way to go, a lot of things that I don’t know yet. I need to learn.”

It's like learning to be in the army in some ways.