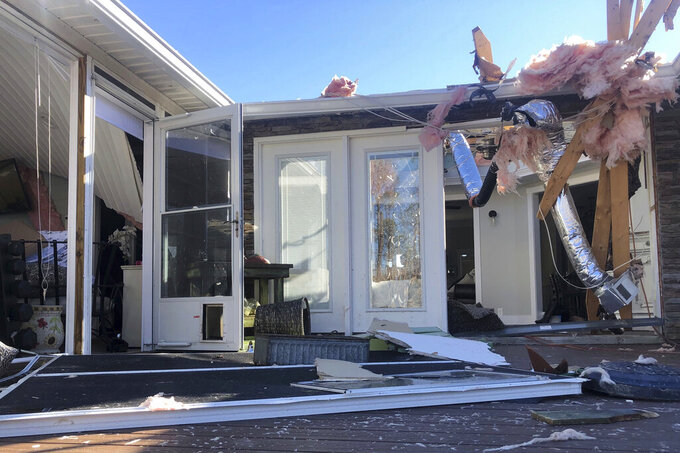 Damage scatters the rear of Tim Long's home in Ocean Isle Beach, N.C., Feb. 16, 2021, following a tornado that struck the area the previous night. The twister that hit Ocean Isle Beach in February killed three people and injured about 10 others. (AP Photo/Bryan Anderson)

RALEIGH, N.C. (AP) — It was 7:54 a.m. when I awoke to the news that a tornado had struck North Carolina’s coast overnight, killing three people and injuring 10 others.

After getting the call from my editor, I started packing — hand sanitizer, N-95 masks and a face shield. Then I set out on the three-hour drive to the Ocean Isle Beach community near the South Carolina border.

When I pulled to the side of the road along Highway 17 late that morning, I saw downed power lines, collapsed homes and severely damaged businesses. Locals were on edge. Journalism was not something they wanted to encounter. They were visibly upset with reporters parking near their businesses, and it was clear they weren't in the mood for talking.

Even reaching residents proved challenging. Police had shut down all access points into and out of the Ocean Ridge Plantation, a complex of costly residences clustered around a golf course where the epicenter of the destruction occurred. On the other side of the highway was a series of blocked-off streets, which prevented reporters from accessing a slew of badly damaged homes nearby.

In a community where residents largely were bypassing pandemic precautions, I was already sticking out like a sore thumb with my mask. I struggled to find people to interview. As is often the case with journalism, I was seeing people at one of the worst moments of their lives. They had a strong dislike of the press, and TV crews showing the damage did not appear to be helping build trust.

When closed roads reopened in certain damaged areas by early afternoon, I scoured the landscape for sources, hoping to track down people willing to tell their stories. Some declined to talk on the record; others brushed me away before I could say a word.

But a blend of persistence and politeness paid off. I emphasized that I cared about their concerns, wouldn’t film without their permission and could communicate their experience to both local and national audiences through a single story. If people asked about my upbringing, I’d try breaking the ice by replying, “I’m from the worst state in the country. Take a guess.” (Correct answer: California.)

Regardless of whether I’m in a conservative or liberal community, I’ve found that this approach opens up conversations, engages people and gives them the comfort to speak candidly. I’ll go to my grave loving my Oakland A’s and San Jose Sharks and missing a good California summer, but I firmly believe that North Carolina is the place I belong.

When I entered restricted areas that had just opened up, I found TV reporters largely talking to people who were already outside surveying the damage. This prompted me to turn to something effective across the years in many journalistic settings: seeking out people in places that others may not have considered approaching.

So when I spotted a house that looked relatively unscathed with kids playing in the front yard, I pulled into the driveway, approached Kristina Clemmons and listened to her family’s harrowing story.

She described how her husband, Jesse, had been trying to turn on a generator shortly after 11:30 p.m., just as the tornado approached. Upon hearing it, her husband hurried back inside and huddled in a closet with his wife and two children.

A few minutes after the twister passed his home, Jesse Clemmons told me he got an alert on his phone. It was a tornado warning.

I walked with him as he showed me his family's damaged backyard. Trampolines sat destroyed. A swing set had been thrown a couple hundred feet away into a nearby forested area. The brick foundation of the house was intact, and the home itself largely unscathed.

When I asked if he knew of other people in the area whose homes were hit harder, he took me on a golf cart tour of the neighborhood, where I was able to reach properties that couldn’t be entered by car — or by TV station van. The images I saw alarmed me.

There was the car stuck in a ditch on the side of the road. There was the string of power lines that construction crews had been propelling back up from 45-degree angles. But perhaps most devastating was the home of 54-year-old electrician Tim Long.

The rear of Long's house was dislodged. Parts of the roof had been ripped off. His garage was crushed, and shattered window glass littered the front and backyard. A bird fountain had sunk to the bottom of his pool, while a demolished door lay floating at the top.

Hiding in their bathroom during the storm, Long and his wife couldn’t hear the destruction over the loud winds. Like Clemmons, they said they received no advance warning. The National Weather Service later confirmed that some Ocean Isle Beach residents had not been informed of the approaching tornado until it was too late.

After speaking to a few other residents, I returned to my car in Clemmons’ driveway and drove to a nearby rest stop that offered good hotspot access. From my car, I typed frantically, filed my story and sent images to my editor.

Amid efforts to restrict media access, residents’ loose adherence to pandemic safety recommendations and a strong distrust in institutions, I was able to offer something of value to readers near and far.

What emerged from the reporting was a story that commanded national attention. People at the storm site may not have trusted members of the media as a whole, but they confided in me, and I did not want to let them down. I was honored to play a role in amplifying their experiences.

There won't always be a pandemic, but there will inevitably be another natural disaster to cover. Knowing how to approach people, treat them with respect and serve as a conduit for reporting for the public good will, for me, always be essential.

“Dispatches,” an occasional series, explores the crossroads between journalism and life through the eyes of journalists across the United States. Bryan Anderson is a corps member for the Associated Press/Report for America Statehouse News Initiative. Report for America is a national service program from The GroundTruth Project that places journalists in local newsrooms to report on undercovered issues. Follow Anderson on Twitter at http://twitter.com/BryanRAnderson.