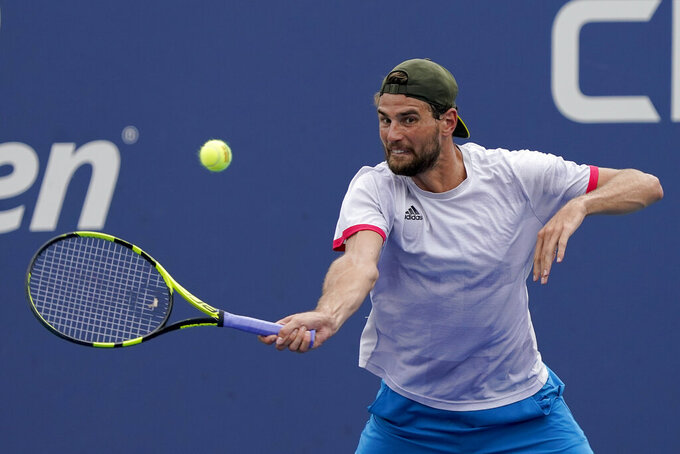 Maxime Cressy, of the United States, returns a shot to Pablo Carreno Busta, of Spain, during the first round of the US Open tennis championships, Tuesday, Aug. 31, 2021, in New York. (AP Photo/Seth Wenig)

NEW YORK (AP) — If the last-name chorus of “Ruuuuuune!” in support of his relatively unknown teenage opponent at the U.S. Open bothered Novak Djokovic, he never let anyone know.

Nor was there any visible evidence that Djokovic was shaken by the shaky patches he went through while dropping a set Tuesday night as he began his historic bid to complete the first calendar-year Grand Slam in men’s tennis since 1969 and collect a record-breaking 21st major singles championship.

Djokovic was not perfect — “It wasn’t the best of my performances,” he acknowledged — but he didn’t need to be. All he needed to do was win, and he did, just as he’s done every time he’s played a Grand Slam match this season, whether on the hard courts of the Australian Open, the red clay of the French Open, the grass of Wimbledon or, now, the first of what he hopes will be seven times on the hard courts of Flushing Meadows.

Quickly regaining control after a second-set blip, then wearing down his cramping foe, Djokovic beat Danish qualifier Holger Vitus Nodskov Rune 6-1, 6-7 (5), 6-2, 6-1 to reach the second round.

“I mean, obviously you always wish to have crowd behind you, but it’s not always possible. That’s all I can say. I mean, I don’t know; I’ve been focusing on myself and what I need to do,” said Djokovic, who next faces Tallon Griekspoor, a 25-year-old from Netherlands ranked 121st who got into the field when Roger Federer pulled out. “I guess I have to just see how it feels on the court and try to keep it together. That’s all I can do.”

So many differences between the two players in Arthur Ashe Stadium on a muggy Tuesday evening.

Djokovic is 34; Rune 18. Djokovic is ranked No. 1; Rune 145th. Djokovic owns 20 Grand Slam titles, the men’s mark he currently shares with rivals Federer and Rafael Nadal; Rune, the junior champion at Roland Garros two years ago, had never played a match in the main draw of a major tournament until Tuesday. Djokovic’s on-court career earnings entering this week were more than $150 million; Rune’s were less than $150,000.

Rune showed up with some belongings in a blue Ikea shopping tote — “It's a nice bag,” he explained — and wearing a backward-turned yellow hat, which he exchanged for a blue one after the first set. His descriptions of this match sounded as if they arrived from someone very much his age: All in all, he found it to be a “crazy experience” and “a dream come true," and the crowd support was “unbelievable" and a "pretty sick feeling.”

Rune did come in on a 13-match winning streak, built on the lower-level ATP Challenger Tour and the qualifying rounds in New York. The fans — back at the U.S. Open after all spectators were banned last year because of the coronavirus pandemic — gave him some serious backing, responding to his pumped fists and uppercuts and pleas for more noise when he was playing at his best level in the second set.

What initially sounded like booing to both players was actually “Rune-ing,” and the kid clearly loved the moment. So did his mother, clapping and smiling in his guest box, which also included Patrick Mouratoglou, Serena Williams’ coach. Rune has trained at Mouratoglou’s tennis academy in France.

Williams came so close to going 4 for 4 at the majors in 2015, before losing in the semifinals at the U.S. Open against Roberta Vinci in one of the biggest upsets in tennis history. Had Djokovic lost this, it would have been even more of a stunner.

Andreescu needed a visit from a trainer in the second set because of stomach issues, but she improved to 8-0 at a tournament she won on her debut two years ago, then missed last year because of injury.

“My food was just, like, rumbling in my stomach, and I just felt like I had to throw up,” said Andreescu, a 21-year-old from Canada who is seeded No. 6. “Just super nauseous, which was super random.”

Earlier on Day Two, the top-seeded woman, Ash Barty, made a successful return to the site of one of the two Grand Slam tournaments she has yet to win.

The biggest holdup for Barty during her 6-1, 7-6 (7) victory over 2010 U.S. Open runner-up Vera Zvonareva came early in the first set. There was a delay of more than five minutes because the Hawk-Eye Live electronic line-calling system went down when a TV camera wasn’t working.

“Just needed to make sure all cameras were spot on, and just, I think, plug one back in,” said Barty, the champion at the French Open in 2019 and Wimbledon this July but never past the fourth round at the U.S. Open, “and we were all right to go.”

She missed the tournament in 2020 because of the COVID-19 outbreak, remaining home in Australia.

This year, for the first time, every match on every court these two weeks is operating without any line judges. Instead, the only human officiating is the chair umpire, while every shot is ruled in or out by a system that uses cameras to detect where balls land.

Last year, electronic calls for each match except those played at the biggest two arenas, Ashe and Louis Armstrong Stadium, where people made the rulings. It was during a fourth-round match in Ashe against Pablo Carreño Busta that Djokovic was defaulted after a game in the first set when he smacked a ball that inadvertently hit a line judge in the throat.

The capable-of-combustion Djokovic, who chucked a racket into the stands while losing to Carreño Busta in the bronze medal match at the Tokyo Olympics a month ago, kept a steady countenance Tuesday, even as a set slipped away and there was applause for his faults during the tiebreaker.

Sure, there was an eye roll here or there. Puffed cheeks. A shake of his head. But otherwise, no outward betrayal of emotion.

Carreño Busta, was a surprise first-round loser Tuesday. He was eliminated 5-7, 4-6, 6-1, 6-4, 7-6 (7) by Maxime Cressy, a Paris-born American ranked 151st. Cressy played college tennis at UCLA, as did Mackie McDonald, the American who defeated No. 27 seed David Goffin in straight sets.

“I hope I can keep the level up and maybe even play better,” said Zverev, the runner-up at the U.S. Open last year, “because to beat Novak here is going to be an extremely difficult task.”