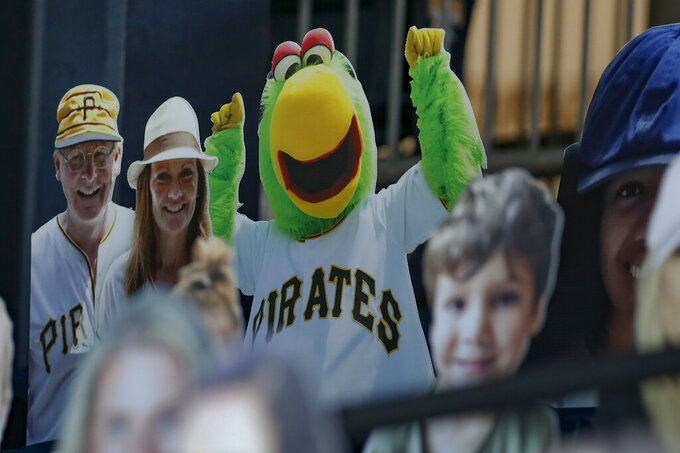 PITTSBURGH (AP) — Randy Dobnak grew up in the Pittsburgh suburbs making regular pilgrimages to PNC Park. When he walked over the Roberto Clemente Bridge for the first time as a professional, the former undrafted prospect turned starting pitcher for the red-hot Minnesota Twins took a moment to drink it in. But only a moment.

And go to work quickly.

Coaxing the listless Pirates into groundball after groundball, Dobnak scattered three hits across six shutout innings as the Twins rolled to a 5-2 win on Wednesday night. The 25-year-old struck out just one batter and didn't issue a walk, relying on his defense and a heavy fastball while dropping his ERA to 0.60. Dobnak threw 46 of his 71 pitches for strikes and wasted little time on the mound, keeping the tempo up and the Pirates off-balance in the process.

“If I get the opportunity to strike somebody out, I’m going to try to do it, but I’m just trying to get early contact and get guys out quick,” Dobnak said. “I like to work at a fast pace. Once I get into my rhythm that’s kind of what happens, I work fast.”

Maybe it's fitting considering how quickly Dobnak's career has evolved. He ended up playing in an independent league after no one selected him in the 2017 draft. The Twins took a flyer on his later that summer. Three years later he's one of the reasons Minnesota is 10-2, tied for the best start in franchise history.

“He put on a show for all the friends and family,” Twins manager Rocco Baldelli said.

Marwin Gonzalez went 2 for 4 with two RBIs for Minnesota. Max Kepler gave Minnesota some breathing room in the ninth with a three-run home run off Pirates' reliever Dovydas Neverauskas.

A year after blasting their way to 101 wins and the AL Central title behind a staggering 307 home runs, the Twins are relying just as heavily on pitching and defense to get by in 2020. The work of Dobnak and three relievers dropped Minnesota’s team ERA to 2.69, second-lowest in the American League behind Cleveland.

Facing the worst-hitting team in the National League helped. Seven of Pittsburgh’s nine starters Wednesday entered the game hitting under .200 and the team’s batting average dipped to a paltry .189.

Pittsburgh's Trevor Williams (0-3) became the first Pirate this season to pitch seven innings. Williams allowed just one run, a flare to left field by Gonzalez in the second that scored Jake Cave. The ball was initially ruled foul, but that was overturned by replay, with Cave being awarded home because he was well past third by the time the ball fell in.

Williams struck out five against one walk and three hits, but Pittsburgh's overworked bullpen faltered in the ninth. The Pirates have dropped seven consecutive games, and their 2-10 record is the worst in baseball.

Josh Bell went 3 for 4 and hit his second home run of the season, a two-run shot in the ninth, but the rest of the Pirates lineup went a combined 1 for 26.

“It’s been a tough stretch,” said Bell, who boosted his average from .171 to .222. “A couple of us have been knocking on the door for a little bit. Just need, one game to turn things around — one solid performance on both sides of the ball.”

The long list of Pittsburgh relievers who are dealing with an injury now includes Nick Burdi. The reliever's season is over after he reported right elbow problems after taking the loss in extra innings on Monday. Burdi — who underwent Tommy John surgery in 2017 and missed most of 2019 while dealing with thoracic outlet syndrome — was filling in as closer while Keone Kela recovers from COVID-19. ... Right-hander Michael Feliz (right forearm strain) is also out for the year while Clay Holmes (forearm) and Kyle Crick (right shoulder strain) are out indefinitely.

Twins: Kenta Maeda (2-0, 1.64 ERA) will try to remain unbeaten since being acquired by Minnesota in the offseason. Maeda went 2-1 with a 4.42 ERA in three career appearances against the Pirates while playing for the Los Angeles Dodgers.