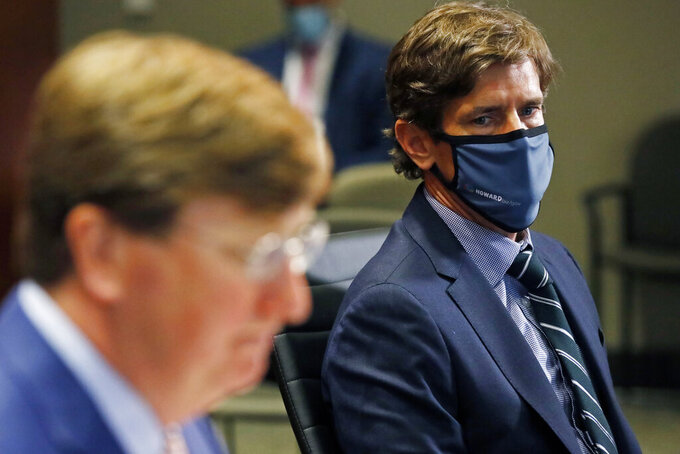 Mississippi State Health Officer Dr. Thomas Dobbs, right, listens as Gov. Tate Reeves responds to a reporter's question regarding his executive order mandating that all adults and students wear masks in schools, unless there's a medical reason that prevents them from doing so, during the governor's COVID-19 press briefing in Jackson, Miss., Tuesday, Aug. 4, 2020. State officials provided reporters an update on the coronavirus and the state's ongoing strategy to limit transmission in public schools. (AP Photo/Rogelio V. Solis) 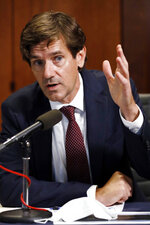 JACKSON, Miss. (AP) — A Mississippi high school is shutting down for two weeks because of a coronavirus outbreak that happened after large “unnecessary” social gatherings where distancing guidelines were ignored, the state health officer said Tuesday.

Dr. Thomas Dobbs said officials at Biloxi High School made the “exactly right decision" when they announced Monday that students would learn virtually until at least Sept. 8. Extracurricular activities were also temporarily suspended, including some of the first football games of the season, causing some negative reactions from athletes and parents.

Gov. Tate Reeves said the school made the decision to close after between one-third and one-fifth of all students were exposed, a situation he described as a “learning experience” for Biloxi and other districts in the state. The school announced Monday that 15 people in the community tested positive COVID-19 and 324 students were sent to quarantine.

“At some point, that's such a large number, that they decided to more or less decide to quarantine the school for at least 14 days," Reeves said Tuesday. He added: "Don’t have parties with 150 to 200 people there. It’s not going to work out well for anyone."

While Biloxi High School is closed, other schools in the district for younger students will remain open.

Since Mississippi schools began reopening in-person in late July, districts have sent almost 4,000 students and 600 teachers home to quarantine because of outbreaks, Dobbs said Tuesday. An entire fourth grade class in the Lafayette County School District was sent to quarantine over the weekend after more than half of the fourth-grade teachers tested positive for the virus.

Summer Newman has three children at Biloxi High School, and she was not happy that the school would be closing for two weeks. She said her children didn’t do well in a virtual learning environment; their grades and mental health suffered.

“I don’t think being home is conducive to my kids learning anything, but there’s really not much I can do about it,” she said Tuesday. “Depression, stress and anxiety — they’ve experienced all of those things since the beginning of the year."

Newman said all of her kids play sports, and they trained all summer for games that are now being postponed. She said she fears the seasons will get canceled altogether.

“They were looking forward to a school year and going to school and getting back to some sort of normalcy, and now here we go again with the yo-yo effect, not knowing what’s going to happen day to day,” she said.

Ultimately, the approach of shutting school down just doesn’t seem logical, Newman said. In addition to her kids at Biloxi High School, Newman said she has a child at the elementary and middle school, and they aren’t being asked to stay home.

“If we can go to a grocery store, sit in a casino, go to bars and do all of those things, then why can’t our children go to school?” she said. “Why can’t they hang out with the friends they haven’t seen in six months?

The Health Department said Tuesday that Mississippi, with a population of about 3 million, has had at least 79,206 reported cases and at least 2,315 deaths from COVID-19 as of Monday evening. That’s an increase of 801 confirmed cases and 67 deaths from numbers reported the day before, with 23 occurring between July 1 and Aug. 17 and later identified from death certificate reports.

The true number of virus infections is thought to be far higher because many people have not been tested and studies suggest people can be infected without feeling sick. The virus causes mild or moderate symptoms for most but can be more severe or fatal for some, especially older adults and those with existing health problems.