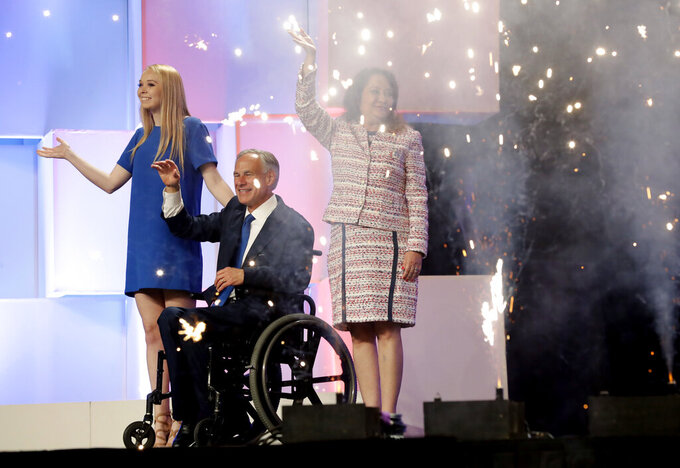 File - In this June 15, 2018 file photo, Texas Gov. Greg Abbott, center, with wife, Cecilia, right, and daughter, Audrey, at the Texas GOP Convention, in San Antonio. As the Texas GOP presses ahead with plans for a July convention amid a worsening coronavirus outbreak, the state's largest medical group Tuesday June 30, 2020, urged the party to reconsider before thousands of Republican activists flock to Houston, which has become one of the nation's most troubling hotspots. (AP Photo/Eric Gay File)

AUSTIN, Texas (AP) — As the Texas GOP presses ahead with plans for a July convention amid a surge in coronavirus cases, the state's largest medical group Tuesday urged the party to reconsider before Republican activists flock to Houston, which has become one of the nation's most troubling hotspots.

The state's GOP leaders have maintained that the three-day convention, which typically draws thousands of attendees, will go forward and that face coverings will not be mandated, even as Republican Gov. Greg Abbott urges the public to wear them.

In Florida, doctors have also called for pushing back the Republican National Convention that is scheduled for August, when President Donald Trump is expected to accept the GOP nomination.

The new plea from the Texas Medical Association, which says it represents more than 50,000 doctors and medical students, amounts to one of the most visible calls yet for Republicans to cancel their in-person convention. The organization is also a sponsor of the convention, which is scheduled to begin July 16.

“While much of our state has so far been spared the brunt of the coronavirus attack, our metropolitan areas in general – and Houston in particular – are now among the national epicenters of current COVID-19 outbreaks,” the group's president, Dr. Diana Fite, wrote in a letter to Texas GOP officials.

She continued: “This is just not the time to bring thousands of the party faithful from around the state to an indoor meeting in a county that, as I write, reports more than 18,000 active COVID-19 cases.”

Texas GOP Chairman James Dickey, who previously described the convention as a chance to “lead the way” in promoting personal responsibility, issued a statement in which he thanked the doctors for the letter but was noncommittal about whether it would lead to any changes.

“We are taking all input from those involved with our Convention, including that from our Party leadership and our delegates, very seriously,” Dickey said.

Houston Fire Chief Samuel Peña said Monday that the city's 911 call volume had increased by 30% over the past month, with most of these calls coming from people reporting respiratory difficulties. The saturation at local hospitals has resulted in more than 560 instances the past three weeks in which city ambulances had to wait for more than an hour before they were able to transfer patients to medical facilities, he said.