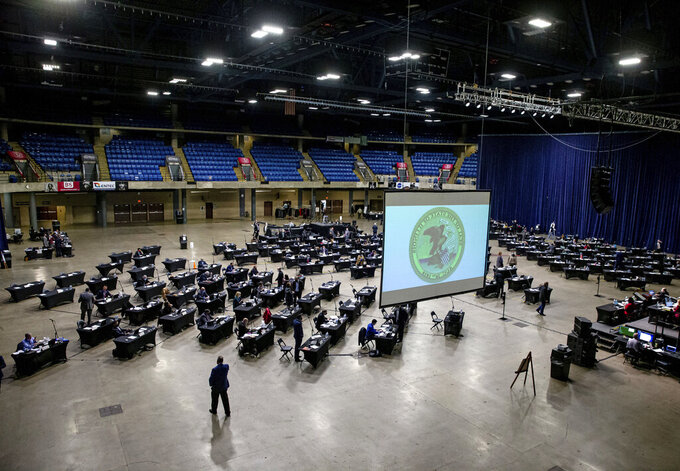 FILE - In this Monday, January 11, 2021, file photo, Illinois lawmakers gather on the floor of the Bank of Springfield Center for the lame-duck session of the Illinois House during the COVID-19 pandemic in Springfield, Ill. The pandemic is costly, not only in lives and livelihoods, but in lawmaking. The Illinois House fled the coronavirus this month by renting Springfield's convention center over seven days to jam in important business at the end of the legislative cycle, documents show. (Justin L. Fowler//The State Journal-Register via AP, File)

SPRINGFIELD, Ill. (AP) — The Illinois House spent $187,000 to rent out Springfield's downtown convention center last week due to fears about conducting business at the Capitol during the coronavirus pandemic, according to documents disclosed to The Associated Press.

Lawmakers in the House have now spent a total of about $330,000 in taxpayer money to rent the center for less than two weeks during the pandemic because officials decided the House chamber does not allow sufficient distance between legislators to avoid transmission of the virus.

The House jammed months of work into last week at the convention center and anticipates 56 more days of legislative action between Feb. 2 and May 31. Considering it’ll likely be months before most people receive a COVID-19 vaccine, continuing the arrangement with the Bank of Springfield Center would be costly.

The illness, which has killed 18,520 Illinois residents since March, has virtually shut down the state's economy, adding billions of dollars of debt to a state already deeply in debt.

After the pandemic's spread picked up speed last March, both the House and Senate, with chambers on opposite ends of the 1872 Capitol, canceled weeks of scheduled meetings. Then, faced with a May 31 deadline to put together an annual spending plan, they feverishly produced one over four days in May.

Like last week, the May session saw the House, with 118 elected officials and dozens of support employees, operated from the BoS Center. Facility rental is $5,000 a day, the standard rate, but with catered meals, security, audio-visual equipment and other incidentals, the four-day contract ran to $144,000, according to invoices disclosed under the Illinois Freedom of Information Act. Add to that the $187,000 rung up for this month's stretch, and it amounts to a daily rate of $30,000.

Although vaccines to prevent COVID-19 have begun to roll out, Illinois public health officials on Thursday reported 4,979 fresh cases of the illness for a total of nearly 1.1 million since its debut. The death toll increased by 123.

The pandemic has affected the Senate too, but not to the same degree. It has continued to meet in the Capitol nine blocks west of the convention center. But business by the 59 senators and their staff members has been conducted with only a handful of lawmakers on the floor at once.

Because the Senate is still using the building, there's no money saved by the House's absence. The secretary of state's office didn't immediately provide details about the typical daily expense for lights, heating or cooling, security and maintenance.

Adding to the convention center expense is that lawmakers and House staff ate catered boxed meals for lunch and dinner, at a combined May and January cost of $92,000. While in session, lawmakers rarely have time to step out for a meal and in the temporary set-up, officials wanted to limit movement to tamp down possible virus transmission.

Future House sessions at BoS Center would likely cost even more. In January, taxpayers were on the hook for only $4,000 a day facility rental. BoS Center General Manager Brian Oaks explained that House Democrats, who control the chamber, wanted the Democratic Party of Illinois to be billed $1,000 a day separately for a room where they could have political discussions. It was during those discussions that the caucus chose Welch for speaker over Michael Madigan, the Chicago Democrat who had controlled the gavel for 36 of the past 38 years.

But that was a wash because lawmakers rented another room for committee hearings that couldn't be conducted on the convention center floor. With audio-visual equipment, the extra room ran more than $9,000. In a legislative body where the bulk of its early spring work is conducted in committees — which in the last General Assembly numbered 37 in the House — it's unlikely that lawmakers could do their work on just the main convention floor and one additional meeting room.

However, due to COVID-19, the BoS Center has no upcoming conflicts. Restrictions on social interaction in Sangamon County limit what the facility can host. Typical arena events are prohibited because current rules limit gatherings to 50 or fewer people. The General Assembly, whose members are considered essential workers, is exempt.

Vaccination of House members could remedy the dilemma. The state is following federal guidelines for inoculating the most vulnerable citizens first. The Illinois Public Health Department did not immediately answer where legislators fall on that priority list.