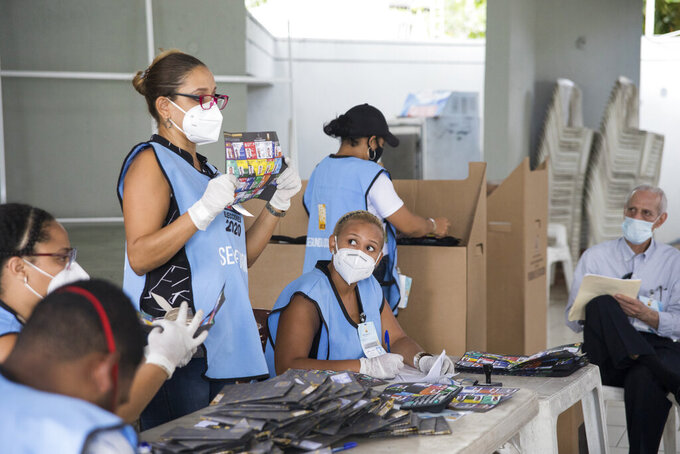 Electoral officials wear protective masks as a precaution against the spread of the new coronavirus, while counting ballots after polls closed during the presidential elections, in Santo Domingo, Dominican Republic, Sunday, July 5, 2020. (AP Photo/Tatiana Fernandez)

SANTO DOMINGO, Dominican Republic (AP) — With COVID-19 cases still surging, the Dominican Republic on Sunday held presidential elections that had already been delayed by the pandemic, and polls indicated that a businessman with no previous experience in government was favored to oust a party that has ruled for the past 16 years.

Luís Abinader, a 52-year-old tourism industry leader who finished second in the last election, was leading in most recent surveys, with the governing party's Gonzalo Castillo, a former public works minister, trailing. Former President Leonel Fernández, who served three previous terms, was also on the ballot, along with three minor parties.

Term limits prevented outgoing President Danilo Medina from seeking a third, four-year term for the center-left Dominican Liberation Party, which has won every presidential election since 2004.

Both Abinader and Castillo, 59, have proposed social assistance programs to cope with the new coronavirus crisis.

The spreading coronavirus prompted officials to delay the election, which had originally been scheduled for May. It went ahead Sunday even though the Health Ministry on Saturday reported the highest daily count of new confirmed COVID-19 cases, 1,241. The country of some 10.5 million people has reported 794 deaths from the disease.

Lines were long and many voters appeared to ignore physical distancing rules as they cast ballots for 32 senators and 190 members of the lower house of congress. Polls were to close at 5 p.m. local time but lines were seen at some polling stations as that hour passed.

If no candidate tops 50% of the vote, a runoff would be held on July 26. The new president takes ofice on Aug. 16.

“I came out to vote becasue we have to get out of this in the first round,” said Aracelis Castillo after voting in the capital.

The campaign was notably low key, with none of the mass meetings and street caravans common in previous years.

On election day itself, at least one fatal altercation broke out with the polling place shooting of a worker for Albinader's party. Authorities said two other people were wounded.