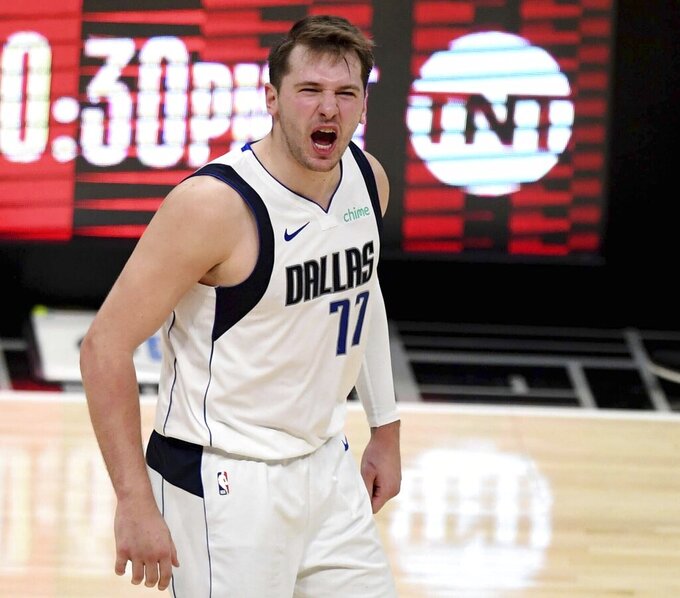 Luka Doncic #77 of the Dallas Mavericks reacts after teammate Kristaps Porzingis (not pictured) scores on a three pointer against the LA Clippers in the fourth quarter of game five of the Western Conference First Round NBA Playoff basketball game at the Staples Center in Los Angeles on Wednesday, June 2, 2021. Dallas Mavericks won 105-100. (Keith Birmingham/The Orange County Register via AP)/The Orange County Register via AP)

Luka Doncic and Slovenia are two wins from the Tokyo Olympics.

Doncic had 18 points and 10 assists, Klemen Prepelic scored 17 points and Slovenia rolled past Poland 112-77 on Thursday in Kaunas, Lithuania, to wrap up a spot in Saturday’s Olympic qualifying tournament semifinals in that region.

Slovenia (2-0) won its two games in group play by a combined 85 points. It now must win on back-to-back days this weekend to qualify for Tokyo.

“Very happy, very pleased, especially when I sit on the bench and I see the guys playing the way they play — playing together, fighting together,” Slovenia coach Aleksander Sekulic said. “For us coaches, it’s really a joy to see them play this way.”

Despite the loss, Poland (1-1) also qualified for the semifinals Saturday.

Thursday was the final day of group play in the four qualifying tournaments at Lithuania, Croatia, Serbia and Canada. No games are scheduled for Friday; two semifinal games in each region are set for Saturday, and those winners will play Sunday to determine the final four teams in the 12-team field for the Tokyo Olympics.

“We didn’t play our best game,” Poland coach Mike Taylor said. “But we’re looking ahead to the semifinals. We’ve got two games to chase our dreams to get to Tokyo.”

Poland won't have an easy time: It gets the host Lithuanians in the semifinals. Slovenia will play Venezuela (1-1) in the other semifinal at Kaunas.

Jonas Valanciunas led a balanced scoring effort with 15 points, and Lithuania outrebounded South Korea 53-26 — more than a 2-to-1 ratio — to earn its spot in the semifinals.

Rokas Jokubaitis and Marius Grigonis each scored 13 points for Lithuania (2-0). Guna Ra scored 26 points for South Korea (0-2), which was eliminated.

China's run of nine consecutive Olympic appearances in men's basketball is over.

Giannoulis Larentzakis scored 21 points, and Greece (1-1) never trailed on its way to an easy win over China and a berth in Saturday's semifinals against Turkey (2-0).

Tomas Satoransky scored 19 points, Jakub Sirina added 17 and the Czech Republic (1-1) earned a semifinal matchup with Canada by escaping with a win over Uruguay.

Bruno Fitipaldo and Jayson Granger each scored 22 for Uruguay (0-2). Granger missed a 3-pointer that would have been the winner in the final seconds.

Germany erased an early 10-point deficit to reach the semifinals of the qualifier in Croatia, eliminating Russia in the process.

Johannes Voigtmann scored a team-high 13 points for Germany, including a jumper with 1:43 left to put his team ahead for good. Moritz Wagner scored 12 for Germany (2-0).

Andrey Vorontsevich scored 17 points for Russia (0-2), which led 17-7 early and 53-45 late in the third quarter but sputtered offensively down the stretch.

Germany will play Croatia (1-1) in the semifinals, while the other semi in Split will see Brazil (2-0) against Mexico (1-1).

The host country earned its semifinal berth by holding off Tunisia, behind 27 points from Mario Hezonja.

Ante Zizic and Bojan Bogdanovic each scored 14 for Croatia, which trailed by a point entering the final quarter but rallied to win the elimination game.

Italy used a 19-0 run in the second half to take command and eventually beat Puerto Rico in a matchup of teams that already knew they were headed to Saturday’s semifinals.

They were assigned to Group B in Belgrade, along with Senegal — which couldn’t get to the tournament because of issues involving positive coronavirus tests and travel restrictions. So Italy and Puerto Rico were both given forfeit wins over Senegal, meaning they were assured of playing this weekend before the event even started.

Nico Mannion, Achille Polonara and Simone Fontecchio all had 21 points apiece for Italy. Gian Clavell led all scorers with 24 for Puerto Rico, which led by 17 late in the first half.

Liz made a 3-pointer just before the first-half buzzer, getting the Dominicans within 41-39 at the break in what had been a very close opening 20 minutes.

The second half was anything but close: the Dominicans outscored the Philippines 55-26 in the final two quarters.