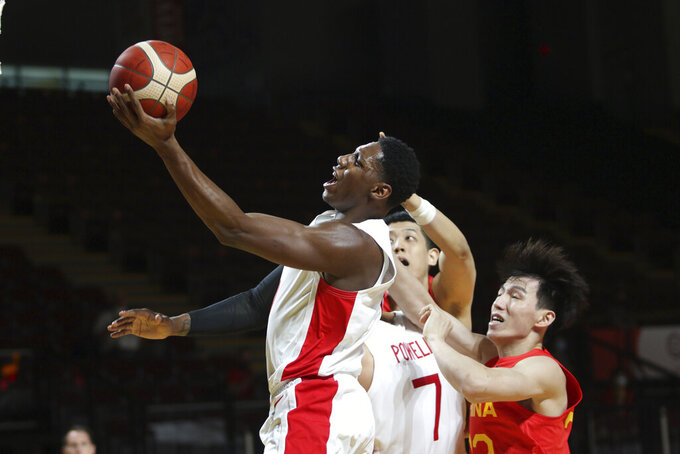 Canada's RJ Barrett drives to the net against China during the first half of a FIBA men’s Olympic basketball qualifying game Wednesday, June 30, 2021, in Victoria, British Columbia. (Chad Hipolito/The Canadian Press via AP)

Zoran Dragic scored 16 points, Doncic and Vlatko Cancar each added 13 and Slovenia rolled past Angola 118-68 on Wednesday during qualifying play at Kaunas, Lithuania. Doncic only played 17 minutes, checking out for good midway through the third quarter.

“We had a great start,” Doncic said.

The qualifying tournaments going on this week — taking place in Lithuania, Croatia, Serbia and Canada — will determine the final four teams in the men’s field for the Tokyo Olympics. Group play runs through Thursday, followed by semifinals on Saturday at all four sites and finals a day later.

The winners of those four games on Sunday, one team from each site, will be the final additions to the Olympic tournament.

Yanick Moreira scored 15 points for Angola, which was eliminated from Olympic contention with the loss.

Up next: Slovenia plays Poland on Thursday. Both teams will advance to Saturday’s Kaunas region semifinals.

Andrew Wiggins scored 20 points and Canada saw seven players reach double figures on the way to an easy win over China and a berth in this weekend's semifinals of the qualifier at Victoria.

Canada had a huge 55-37 edge in rebounds. RJ Barrett scored 16 points and Andrew Nicholson scored 14 for the winners, who will play a semifinal game on Saturday and are now two wins away from making the Tokyo Games.

Up next: China plays Greece on Thursday in an elimination game, with the winner moving to Saturday's semifinal round.

Furkan Korkmaz scored 20 points and Turkey moved into the semifinals, closing the game on a 19-9 run over the final 6:25.

Up next: The Czech Republic plays Uruguay on Thursday in an elimination game.

Venezuela had a 21-point lead in the third quarter trimmed to one before hanging on to defeat South Korea.

Venezuela led 59-38 early in the third before South Korea went on a 26-6 run, drawing within 65-64 on a 3-pointer from Byeon Junhyeong late in the quarter. But Venezuela never lost the lead, and outscored the South Koreans 29-16 in the final 11 minutes.

Heissler Guillent led Venezuela with 17 points, while Pedro Chourlo and Michael Carrera each had 16.

Up next: South Korea plays Lithuania on Thursday. FIBA said Venezuela will advance to Saturday’s semifinals, which means the South Korea-Lithuania winner will as well.

Mexico outscored Russia 19-7 in the third quarter, the decisive 10 minutes in what became an eight-point win.

Up next: Russia faces Germany on Thursday in a must-win game for their Olympic hopes.

Rafael Hettsheimer scored 20 points and Brazil rolled into a semifinal spot. Bruno Caboclo added 17 points for Brazil, which is now off until Saturday.

Up next: Croatia faces a must-win game against Tunisia on Thursday.

Boban Marjanovic had 25 points and 10 rebounds as Serbia moved into the semifinals with a hard-fought win.

Up next: The Philippines plays the Dominican Republic on Thursday in an elimination game.