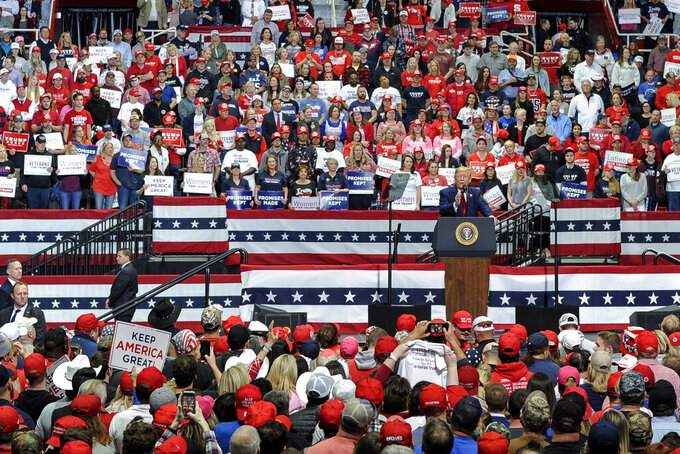 FILE - In this March 2, 2020 file photo, President Donald Trump speaks during a campaign rally in Charlotte, N.C. Trump’s re-election campaign is planning a large indoor rally next week raising concern among health experts about how it might spread the coronavirus. Oklahoma health authorities say anyone who attends a large public event should get tested for COVID-19 shortly after. (AP Photo/Mike McCarn)

OKLAHOMA CITY (AP) — For most mayors in deep-red states like Oklahoma, the prospect of hosting the first rally for President Donald Trump in months would be a delight. It would showcase the city on an international stage and draw revenue for local businesses that have been shuttered for months amid the coronavirus outbreak.

But G.T. Bynum, the first-term mayor of Tulsa, isn't celebrating Trump’s planned rally Saturday at the city’s 19,000-seat downtown BOK Center arena. While other Oklahoma GOP officials are hailing the event, Bynum finds himself in a precarious position, balancing partisan politics, the city's deep racial wounds and a COVID-19 infection rate that is suddenly spiking.

Trump announced the rally in Tulsa as the kick-off of a tour to rev up his political base and show the nation's economy reopening after the long quarantine. Trump said in a tweet that almost 1 million people have requested tickets, although party officials haven't announced the total. Oklahoma has followed a Trump-friendly aggressive schedule for its economic reopening, ticking through a series of phases that now have almost all businesses free to resume operations.

But the announcement comes as Tulsa's infection rate is rising steadily after remaining moderate for months. The four-day average number of new cases in the city has doubled from the previous peak in April. The city’s own health department director, Dr. Bruce Dart, has said he hopes the rally will be postponed, noting that large indoor gatherings are partially to blame for the recent spread.

Meanwhile, many leaders in the city's black community have lashed out at Trump's visit as provocative after the death of black Minneapolis resident George Floyd and mass protests around the world. Tulsa was the site of the nation's deadliest race massacre in 1921, when up to 300 black residents were killed by a white mob and the city's thriving Black Wall Street district was burned to the ground.

The massacre was covered up in subsequent years, “and I’m not sure we’ve ever really even gotten over the hump,” said state Rep. Monroe Nichols, an African American Democrat who represents the city’s largely black north side. “I think the fact that the president is coming annoys folks in the African American community just as much as other folks in the community who don’t subscribe to his brand of politics.”

Bynum has maintained an awkward balancing act — not joining Dart's plea to postpone the rally to avert a health emergency, even though both have been strident about avoiding large groups, and not joining other Republican officials in celebrating with the popular Trump. Bynum said he would not attend the rally.

“I think he’s trying to bring people together to find that middle ground and common purpose. And that’s never going to be satisfying for the people at the ideological extremes, and they tend to be noisy,” said David Holt, the mayor of Oklahoma City and a friend of Bynum's.

Bynum did not respond to a request for an interview but released a statement on his Facebook page Tuesday indicating he had no plans to stop the rally by invoking civil emergency authority. He also said he was unaware of plans for a rally until the BOK Center management reached out to the city regarding police support.

“Do I share anxiety about having a full house at the BOK Center? Of course," he wrote. “As someone who is cautious by nature, I don't like to be the first to try anything. I would have loved some other city to have proven the safety of such an event already."

Bynum, 43, is part of a political dynasty in Tulsa. His uncle, grandfather and great-great-grandfather all served as mayor. The city of 400,000 has long been Republican country, and he served as a staff member for GOP U.S. Sens. Don Nickles and Tom Coburn before defeating a fellow Republican in the nonpartisan mayor’s race in 2016.

He campaigned on public education but also on investing in the black community, traditionally a Democratic cause. After the shooting of Terence Crutcher, an unarmed black man, by a Tulsa police officer in 2016, Bynum pushed for independent oversight of the police department, but was thwarted by fierce opposition from the police union. He has also pushed for publicly coming to terms with the race massacre, earning him credit in the black community that may have helped the city avert violence after Floyd's death at the hands of a white police officer in Minneapolis.

Bynum did draw the ire of many for comments in a national interview in which he blamed drug use, not race, for Crutcher’s death. Bynum later walked back the comments, writing in a post on social media: “When your friends start calling you and repeatedly using the phrase, ‘I know your heart,’ it’s a good indicator you’ve screwed up.

“I would hope that my work during 8 years on the City Council and 4 years in the Mayor’s Office would speak louder than one dumb and overly-simplistic answer to a complex question, but I understand if it doesn’t.”

Other Oklahoma Republican officials insisted the Trump rally can be good for the black community — Republican Gov. Kevin Stitt said he has invited Trump to join him on a walking tour of the Greenwood district, where the massacre occurred, to build understanding. And the head of the Oklahoma Republican Party, David McLain, insisted the rally can be safe. He said all rally goers will be provided with masks, although there will be no mandate to wear them. He said party officials would like to see every seat filled.

“I think mayors across the country have got a lot on their plates, and we’re all challenged right now to find the right balance of a lot of competing interests in the midst of generational crises happening one after the other, but I think obviously in Tulsa you have an even more complicated history with race,” Holt said.