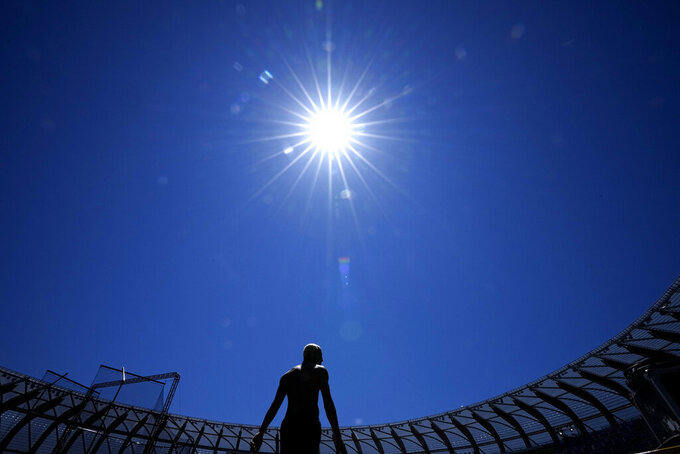 FILE - An athlete trains before the World Athletics Championships, Thursday, July 14, 2022, in Eugene, Ore. Shortly after last year’s Olympics, the urine samples of some six dozen athletes came back with traces of a banned stimulant. Career-altering penalties loomed. But they were avoided thanks to some nimble sleuthing by anti-doping scientists in the U.S. and Germany. The scientists discovered the stimulant could be found in an ingredient present in an over-the-counter sunscreen. (AP Photo/Gregory Bull, File)

Though there's nothing novel in suggesting all 1,900 athletes who will train and compete in the sunny stadium at track world championships in Eugene, Oregon, over the next 10 days should slather up with sunscreen, in the complicated world of antidoping, nothing is quite that simple.

Shortly after last year's Olympics, the urine samples of more than six dozen athletes who competed in Tokyo came back with traces of a banned stimulant. Career-altering penalties loomed. But they were avoided thanks to some nimble sleuthing by antidoping scientists in the U.S. and Germany. The scientists discovered the stimulant could be found in an ingredient present in an over-the-counter sunscreen.

“I’m lathering sunscreen all over my body. People are laughing at me in the office,” said Dr. Matt Fedoruk, the chief scientist at the U.S. Anti-Doping Agency, who identified the issue and also volunteered to be a test subject for his own study. “I’m carrying around urine bottles and sending them to the lab. And within 48 hours, we had the answer to our question.”

It’s an issue that runs more than skin deep throughout sports.

Increasingly sensitive instruments designed to detect banned substances have the ability to pick up increasingly minuscule amounts of those substances in an athlete's system. In some cases, athletes ingest them intentionally.

But in a growing number of instances, the banned drugs enter their systems in unintentional ways: through the skin via sunscreen or eyeliner, or through contaminated prescription drugs or, in the particularly frustrating case of American distance runner Shelby Houlihan, through what she claims was a pork burrito tainted with traces of a banned performance-enhancing drug.

“Most labs are experiencing really good advancements in technology,” USADA CEO Travis T. Tygart said. “But importantly, the science and the rules also need to advance so that we can be certain we're not only capturing intentional cheats, but also that we're not punishing innocent athletes.”

The sunscreen sleuthing began when Fedoruk, the USADA scientist, found it strange that two athletes from diametrically opposed worlds — a figure skater, Jessica Calalang, and a mixed-martial arts fighter, Rob Font — had each tested positive for 4-chlorophenoxyacetic acid (4-CPA). That substance is a metabolite of meclofenoxate, which is a prohibited stimulant that hadn't been much on the antidoping radar for years.

Fedoruk started asking questions and, in a fortuitous turn, Font had kept an extensive log of everything he had eaten, or applied to his body, for months. One of them was the sunscreen.

A trip to the drugstore ensued. After about a week of Fedoruk and 11 other volunteers lathering on sunscreen, the scientists discovered that traces of 4-CPA were showing up in their urine. It came from a preservative in the sunscreen.

Word spread quickly around the globe. Scientists at the antidoping lab in Cologne, Germany, where many of the tests from the Tokyo Games had been sent to be analyzed, had also been tipped off to the intel and started looking for the metabolite in an over-the-counter muscle relaxant sold in Asia.

In the end, global antidoping officials rewrote a technical paper that gave new instructions on testing thresholds for 4-CPA.

Around 80 athletes at the Tokyo Games who were found to have ingested the metabolite via sunscreen didn't endure the agony of having to prove their innocence against charges that could've left them befuddled and outmanned by international antidoping officials who, at times, have offered little leeway for rules violations, no matter the cause.

Calalang's positive test — a result of using eyeliner that contained the same preservative as the sunscreen — cost her eight months of legal wrangling and a spot at world championships in 2021. Ultimately, the discovery and change in the global rulebook got her reinstated.

“If Jessica did not have the resources and support to retain a lawyer to assist her, this could have easily been another case where an innocent athlete ends up serving a lengthy ban,” her attorney, Howard Jacobs, said after her reinstatement.

There are dozens of other examples that don't have to do with sunscreen or 4-CPA. Among them:

—U.S. Olympic middle-distance runner Brenda Martinez had a doping positive for a banned diuretic announced, only to have any possible penalty waived after detective work revealed the banned substance had entered her system via a tainted antidepressant.

—An unnamed Olympic gold medalist got in a car accident, only to later test positive for a diuretic that entered the athlete's system after receiving a post-accident blood transfusion.

—There are recent studies about how trace amounts of banned substances could enter athletes' systems via a malaria drug, or eggs.

—New technology has led scientists to discover that an estimated .39% of the Chinese population have a characteristic in their blood that could cause a false positive for Erythropoietin (EPO) — a difficult-to-detect banned substance used by endurance athletes to boost stamina.

It might be too late, however, for the science to help Houlihan. The American champion middle-distance runner has insisted she is not guilty of doping after international authorities gave her a four-year ban when she tested positive for nandrolone. It was a case USADA officials have said they likely would not have pursued.

Houlihan said the substance came from a tainted pork burrito she bought from a food truck. A number of similar cases had previously been thrown out when athletes were able to prove what they ate was tainted. But that hasn't worked out for the 29-year-old runner.

Ongoing studies could produce new scientific evidence that sheds more light on complex questions about contamination of locally sourced meat. That might eventually help prove Houlihan's innocence, but it's questionable as to whether it would get her case reversed.

While that detective work continues, the sunscreen issue seems resolved. Athletes can slather up without worry this week at world championships.

“We want to be fair to athletes,” Fedoruk said. "And we want to make sure that we can make decisions in the athlete's favor where it's not intentional doping.”