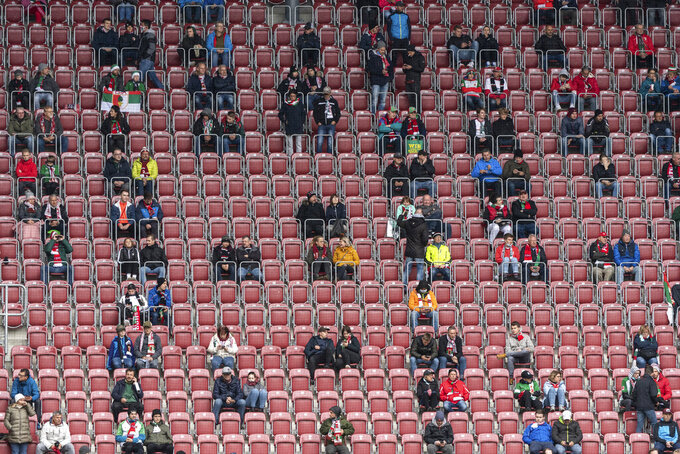 Fans sit on the tribune prior the German Bundesliga soccer match between FC Augsburg and Borussia Dortmund in Augsburg, Germany, Saturday, Sept. 26, 2020. (Matthias Balk/dpa via AP)

BERLIN (AP) — One week after its young attacking stars impressed in the Bundesliga, Borussia Dortmund slumped to a 2-0 defeat at Augsburg.

Gio Reyna, Jadon Sancho, Erling Haaland and Jude Bellingham grabbed the headlines in beating Borussia Mönchengladbach 3-0 in the opening round, but were frustrated by a stubborn defense marshaled by Augsburg goalkeeper Rafal Gikiewicz on Saturday.

Dortmund dominated the first half with eight efforts on target, but Felix Uduokhai scored with Augsburg’s only chance of the half, heading home a free kick from close range in the 40th minute.

Dortmund coach Lucien Favre sent on Marco Reus and Julian Brandt with half an hour to play, to little effect. The 18-year-old Brazilian Reinier followed for his Bundesliga debut in the 69th, but he couldn’t lift the side either.

Gikiewicz’s former side, Union Berlin, salvaged a 1-1 draw at Gladbach thanks to Nico Schlotterbeck’s late equalizer. Marcus Thuram scored with a deflected header for Gladbach in the 56th.

Joan Simun Edmundsson scored for Bielefeld to win 1-0, and Stuttgart fought back to win in Mainz 4-1.

Schalke was to host Werder Bremen later, hoping to end a 17-game run without a win. Fans were allowed to attend, but those plans were canceled earlier Saturday due to a high number of new coronavirus infections in the area.

Limited numbers of fans have been allowed at most games since last weekend for the first time since restrictions began in March.