Dozens line up at Oklahoma City church for COVID vaccine 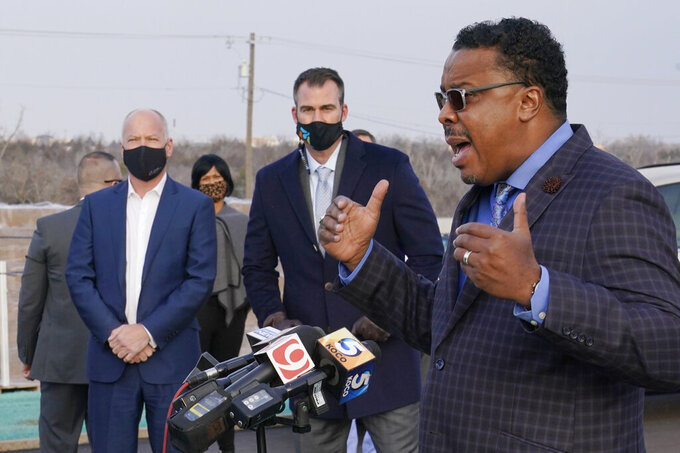 OKLAHOMA CITY (AP) — People lined up outside a predominantly Black northeast Oklahoma City church prior to 8 a.m. Tuesday in order to begin receiving the COVID-19 vaccine as part of an outreach to minorities, who may be distrustful of the vaccination.

“You still have African Americans that are very hesitant about taking this vaccine,” said Rev. Derrick Scobey, senior pastor of Ebenezer Baptist Church where the vaccinations were administered. “We all know that there is certainly a fact in the late 1930s and 40s that there was a Tuskegee, Alabama, Institute that had this syphilis experiment going on,” said Ebenezer Baptist Church Rev. Derrick Scobey.

In the infamous Tuskegee experiment, U.S. health workers left syphilis untreated in Black men without their consent so doctors could study the disease’s progression.

Tuesday's vaccinations were available by appointment only, to all races, and were coordinated by the Oklahoma State Department of Health, the Oklahoma City-County Health Department, INTEGRIS Health and the church, according to Scobey, who said he received a vaccination last week.

Gov. Kevin Stitt said 1,130 vaccinations were to be administered to those 65 and older of all races who made appointments at the church.

“When we saw that the African American population was at 2 1/2% receiving the vaccine I put our team in motion to actually set up a pod,” to provide vaccinations, Stitt sad.

The state had administered about 300,000 vaccinations as of Monday, according to the Oklahoma State Department of Health.

The health department on Tuesday reported a total of 376,424 coronavirus cases and 3,323 deaths due to COVID since the pandemic began in March, increases of 1,571 cases and 30 deaths from Monday.

Oklahoma had the seventh highest rate of new cases per capita in the United States at 1,004.44 per 100,000 population according to data from Johns Hopkins University.

The seven-day rolling average of new cases declined during the past two weeks from 4,068 per day on Jan. 11 to 2,576.71 and the positivity rate dropped from 21.24% to 16.74%, according to the Johns Hopkins data. The rolling average of deaths has risen from 31.86 deaths to 42.71 deaths per day during the same time frame, according to the Johns Hopkins data.