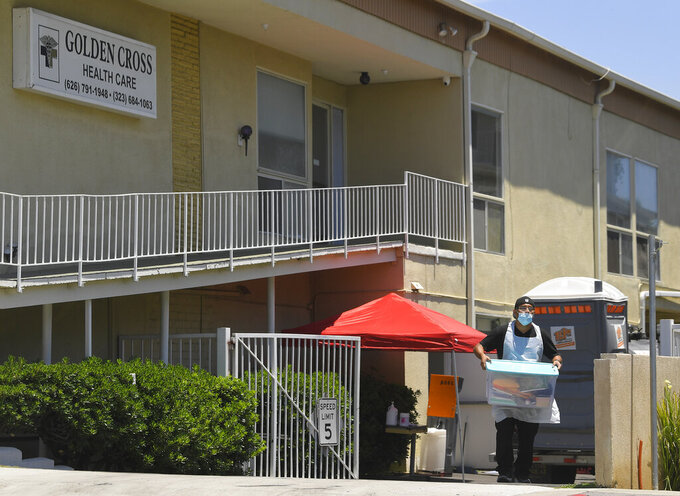 The belongings of a worker are removed from the Golden Cross Heath Care facility, Friday, June 12, 2020, near Pasadena, Calif. Dozens of residents were moved out of the nursing home late Thursday after it was stripped of its state license amid a coronavirus outbreak there. (AP Photo/Mark J. Terrill) 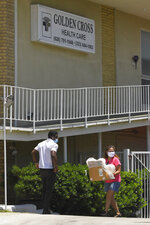 PASADENA, Calif. (AP) — Dozens of residents of a Southern California nursing home were evacuated to other facilities after authorities alleged it failed to provide proper care.

Ambulances lined up late Thursday to take patients away from Golden Cross Health Care in Pasadena.

Sixty-three patients were moved to other nursing homes, city spokeswoman Lisa Derderian told the Southern California News Group on Friday. None of the patients required hospitalization.

“The health care facility failed to do even just fundamental actions with the most basic care,” Derderian said.

Golden Cross did not respond to an email seeking comment on the city’s allegations.

The Pasadena Public Health Department and the offices of the city attorney and city manager were involved for weeks, and the action was only in part due to the facility’s response to the coronavirus pandemic, she said.

Southern California News Group reported that an email sent to the City Council by the city manager on Thursday said the state Department of Public Health had served Golden Cross attorneys “with a temporary suspension order and accusation to revoke their license to operate.” It said Golden Cross can appeal but the state “has the authority to start depopulating the facility.”

Derderian said the city pushed the state to act and a team was brought in to run the nursing home about two weeks ago. It then transitioned to medical teams from the National Guard last weekend.

Early last month the facility was reporting 10 or fewer cases of COVID-19 and now has 72 cases among residents, 32 among employees and has been linked to eight deaths, the news group reported.

More than 2,000 residents of skilled nursing facilities have died with the virus in California, accounting for 41% of the state’s virus deaths, according to state data.