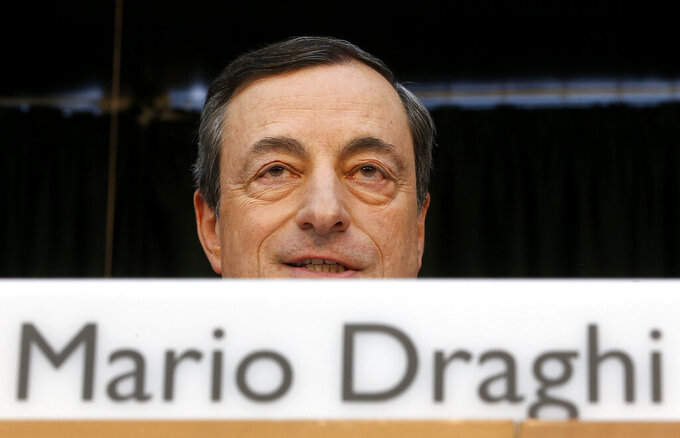 FILE - In this Thursday, June 5, 2014 file photo, the President of the European Central Bank Mario Draghi speaks during a news conference in Frankfurt, Germany. Italy's weary president on Wednesday, Feb. 3, 2021 tapped "Super Mario," arguably the world's most famous Italian, to resolve a festering political crisis that threatens the ability of the eurozone's third-largest economy to manage the coronavirus pandemic and recover from the worst recession since World War II. (AP Photo/Michael Probst, File)

MILAN (AP) — The former Italian premier who triggered the collapse of a successor's government threw his support Friday behind former bank chief Mario Draghi to head up Italy's next government, which will have the job of allocating more than 200 billion euros ($240 billion) in European Union funds to relaunch the country's pandemic-ravaged economy.

Matteo Renzi, who set off a political crisis by pulling his tiny Italy Alive party from the governing coalition led by Premier Giuseppe Conte, said having former European Central Bank chief Draghi as prime minister “is an insurance for the lives of our children and grandchildren,’’ and that there is no one better to handle the EU recovery funds.

“Never has our country had so much money since after the war. It is more than the Marshall Plan,’’ Renzi told reporters, referring to the U.S.-financed program for rebuilding Europe after World War II. “Who can manage this transition better than Draghi?”

The former premier spoke after meeting with Draghi, who was in his second day of consulting Italy’s fractious parties after being tapped by President Sergio Mattarella to try to pull together a government to guide the debt-riddled country through the health and economic crises it is confronting.

Conte was unable to cobble together support for a third government after Italy Alive withdrew from his second governing coalition. The Democratic Party, which also was part of second Conte’s government, has assured its support for the Draghi-led government, as has Silvio Berlusconi’s conservative Forza Italia party.

Giorgia Meloni, head of the far-right Brothers of Italy party, also met Friday with Draghi. Meloni, whose opposition party has been gaining in popularity, said she would not support the 73-year-old Draghi in a confidence vote but would decide later whether to vote against his proposed Cabinet or to abstain.

She said it would depend on whether he will form a government to handle Italy’s most pressing issues -- a vaccine campaign and administering the EU funds -- or if he intends to stay on through the remainder of the legislature, which expires in two years.

She also said she lacked clarity on whether the government would be political -- that is, representing the platforms of the parties that support it -- or technocratic.

Consultations continue Saturday with the two holdouts: the right-wing League and the 5-Star Movement.

The 5-Star Movement, the largest vote-getter in the last parliamentary election, is divided on whether to support Draghi. Its anti-establishment roots run counter to having a non-political government, but three years in government has helped its leaders develop a more pragmatic strain.

And the League remains divided by its anti-EU sentiment, represented by leader Matteo Salvini, and its northern entrepreneurial base, which views Draghi favorably.

Indicative of the dilemma facing Salvini is that the head of the Confindustria industrial lobby in the League-stronghold northern Verona province has been vocal in his support of Draghi, echoing the national lobby’s position.

“Draghi represents the face of Italy as we entrepreneurs are trying to construct,’’ Michele Bauli said this week. “As a credible country.”