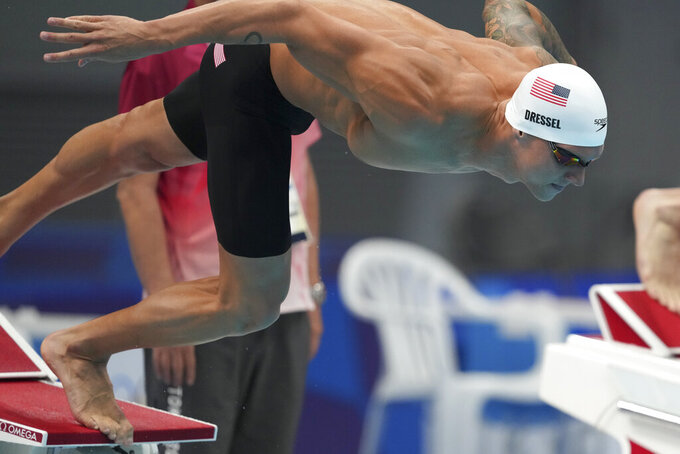 Caeleb Dressel of the United States starts in his heat of the men's 100-meter freestyle at the 2020 Summer Olympics, Tuesday, July 27, 2021, in Tokyo, Japan. (AP Photo/Matthias Schrader)

Thomas Ceccon of Italy led the way in 47.71 seconds on Tuesday night at the Tokyo Aquatics Centre. Dressel clocked 47.73 while swimming in the same heat.

“I feel like I cleaned up a lot that I didn’t do on the relay, so I’m really happy with it,” Dressel said.

Australia's Kyle Chalmers, the defending Olympic champion, was third-quickest in 47.77. Among the 16 men advancing to the semifinals was 16-year-old Romanian David Popovici and American Zach Apple.

Dressel already owns one gold medal in Tokyo, having led off the victorious 4x100 free relay on Monday. Apple swam the anchor leg for the Americans. Ceccon helped the Italians to a silver medal, while Chalmers anchored the Aussies' bronze medal-winning team.

Dressel had been a spectator for most of the meet's first three days, watching his teammates 11 win medals before he contributed a 12th with the relay win.

“It's tough watching events go when you're just waiting for your chance,” he said. “My first swims are usually pretty rocky, so I'm glad to get going with the meet.”

Dressel is a possibility to swim in the relay final on Wednesday.

He gave his gold medal from the 4x100 free relay to teammate Brooks Curry, who helped the U.S. secure a spot by swimming in the preliminaries. Dressel tossed the medal to Curry in the stands during the team's victory lap around the deck.

“I had the easiest job last night out of everyone here. I got to watch it on TV,” Dressel said, "so I felt like he deserved that a little more than me.”

Curry would ultimately have received a gold medal of his own, but prelim swimmers don't participate in the medal ceremony. The American coaches present those medals during a team meeting later in the week.

Australia's Izaac Stubblety-Cook and Arno Kamminga of the Netherlands tied for the top time in the men's 200 breaststroke in 2:07.37. Kamminga was the silver medalist in the 100 breast. Nic Fink of the U.S. qualified fourth.

Ukraine's Mykhailo Romanchuk advanced to the final of the men's 800 free. He had the fastest time of 7:41.28, an Olympic record.

Florian Wellbrock of Germany and Bobby Fink of the U.S. also advanced.

China's Zhang Yufei, silver medalist in the 100 butterfly, led the way in the 200 fly heats with a time of 2:07.50. Hali Flickinger of the U.S., who earned a bronze medal in the 400 individual medley, was second at 2:08.31. American Regan Smith also advanced to the semifinals.