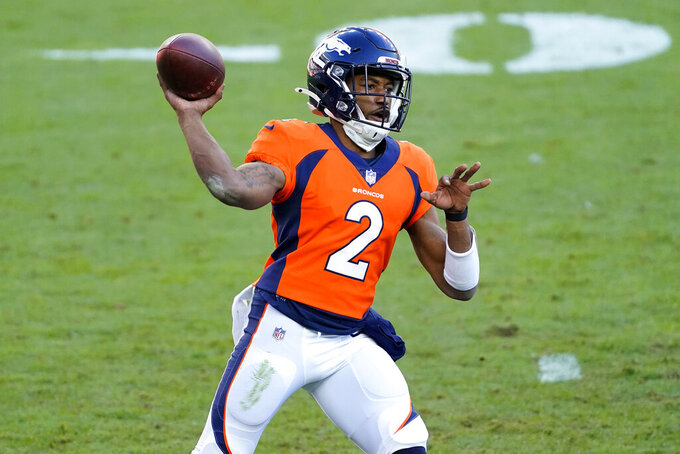 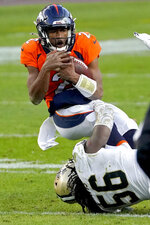 ENGLEWOOD, Colo. (AP) — Their quarantined quarterback quartet sure left the Denver Broncos in, shall we say, quite the quagmire.

The NFL made the Broncos play without any QBs Sunday, and their 31-3 loss to the Saints serves as an embarrassing example for other teams not to violate the NFL’s COVID-19 mitigation measures.

The Broncos (4-7) are expected to face a hefty fine and loss of a draft pick as a repeat offender of the league’s coronavirus rules, but it’s Drew Lock who could pay the biggest price for goofing up.

Lock has now started 13 games and missed 14 in his moonwalk of an NFL career.

A day after saying he was disappointed his QBs put them in a difficult spot, coach Vic Fangio said Monday the organization’s faith in Lock hasn’t been shaken by this ugly episode.

Lock's leadership traits, however, will be tested anew in December because he hasn't shown this season that he's undeniably the answer under center despite John Elway's recent vote of confidence.

Lock has played poorly in 2020 — seven touchdown throws, 11 interceptions — and he’s missed 15 quarters of action with a shoulder injury and self-inflicted isolation.

Rookie practice squad receiver Kendall Hinton was thrust into the starting quarterback role with zero practice reps after Lock, Brett Rypien and Blake Bortles were disqualified Saturday for having been mask-less around No. 3 QB Jeff Driskel last week before Driskel tested positive for the coronavirus.

Hinton completed more passes to his opponents (two) than to his teammates (one) Sunday when he went 1-for-9 for 13 yards and a zero passer rating.

“A lot of respect for this guy,” Saints linebacker Demario Davis tweeted afterward. “He handled this situation like a real pro. I can only imagine the range of emotions and mental download he went through in 24 hrs.”

His teammates gave him props, too.

“Yeah, the results aren’t what we wanted but at the same time that’s mad respect to that kid,” left tackle Garett Bolles said Monday.

Bolles added that he was in a forgiving mood when it comes to the quarterbacks who goofed up, saying the locker room will welcome them back.

Denver’s defense twisted Taysom Hill in knots just as it had Tua Tagovailoa a week earlier, holding the Saints’ fill-in QB to 78 yards passing and the NFC’s top team to just 292 yards.

That, of course, wasn’t nearly good enough with Lock watching the game on TV and Hinton sharing snaps with running backs Royce Freeman and Phillip Lindsay.

This whole debacle could have been avoided had the Broncos opted to have a quarantined quarterback like the Eagles did with Josh McCown before he was signed to Houston’s active roster a few weeks ago.

Fangio said in training camp, however, that such a contingency wasn’t necessary because the QBs were masked in meetings and socially distanced, so “there hasn’t been an issue so far, knock on wood.”

That good fortune ran out when the quarterbacks gathered last Tuesday for some off-day film work, but didn’t follow the league’s COVID-19 protocols.

So, the Broncos are rethinking that stance and might isolate Bortles in December, Fangio said, although “I think if we just follow protocols we’ll be fine.”

As the starter, Lock's transgression hits differently than the others.

“Yeah, we’re all disappointed that it happened. It’s not just Drew. I know Drew’s getting the bulk of (the criticism) because he’s the starter, but there was four of them in there and you’d like for one of them to take the lead and make sure that they’re spaced out far enough,” Fangio said.

“But again, it’s just like with my kids. My kids have done things that have disappointed me during their upbringings, but I still love them. And I still love Drew and all of the quarterbacks. They made a mistake that we’re ready to move past.”

Fangio said Lock, Rypien and Bortles tested negative again Monday and if they test negative again Tuesday, they'll be allowed back in the building Wednesday.

Still looming over them, however, is discipline from the team, which Fangio said would likely be in the form of fines.

The Broncos’ adherence to COVID-19 protocols.

Fangio said Lindsay (knee) might return against the Chiefs this weekend, but top CB Bryce Callahan (foot) is expected “to miss some time.”

Last year, Lock was activated from IR after recovering from a sprained right thumb he sustained in the preseason and was given a five-week audition during which he went 4-1. That small sample size convinced Elway that Lock was his guy and the Broncos spent the offseason building around their quarterback instead of searching for another one.

Lock has an even bigger five-week test coming up, to prove he’s worthy — and trustworthy — of leading the Broncos in 2021.