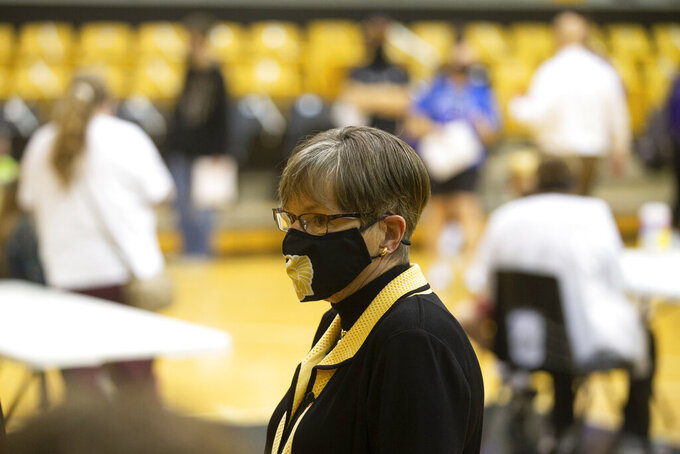 TOPEKA, Kan. (AP) — With new COVID-19 vaccinations declining, Kansas is changing its strategy for reaching herd immunity from holding mass immunization clinics to having doctor's offices and pharmacies give shots.

Public health officials said this week that the change will make getting the shots more convenient for some people or tap into their existing trust in their doctors to overcome hesitation about getting vaccinated. Kansas has continued to have more than 600,000 unused doses since late April and the state has ratcheted back on ordering more from the federal government — seeking only 2.3% of its allotment for this week, or 3,440 of the 147,600 doses available.

County health departments have cut hours for mass vaccination clinics, and since the end of April, the state Department of Health and Environment has allowed health care providers to order as little as a single vial of doses at a time.

"Whatever it takes to facilitate individuals getting vaccinated, that’s what we want to do,” said Paula Rowden, a registered nurse and the administrator for the Stevens County Health Department in southwest Kansas.

The state reported that as of Wednesday, about 1.18 million of the state's 2.9 million residents, or 40.5%, had received at least one vaccine shot.

Department spokeswoman Kristi Zears said “a general consensus” is that reaching herd immunity requires 75% to 80% of the population to have COVID-19 antibodies, either from vaccinations or previous infections. The state's data suggests that if vaccinations don't pick up again, that would not happen for months.

Herd immunity can differ by disease. For example, it's 80% for polio and 95% for measles, said Dr. Sanmi Areola, director of the health department in Johnson County, the state's most populous county.

“The more people that we vaccinate, the more that we break the cycle of transmission,” Areola said.

The state reported that 43.7% of Johnson County residents had received at least one vaccine shot as of Wednesday, the fourth-highest rate among Kansas' 105 counties. In Stevens County, the figure is 22.8%, making it one of four counties below 25%.

Public health officials said mass clinics were effective in managing immunizations when vaccine supplies were limited and demand was high and later when many people remained eager to get immunized.

But Dr. Dana Hawkinson, director of infection control for the University of Kansas Health System, said changing the strategy is “probably going to be able to get the vaccines into arms a lot better.”

Public health officials do expect mass vaccination clinics to continue for some time, even if they'll be scaled back. Gov. Laura Kelly toured one Monday at Topeka High School, where 250 to 275 students aged 12 to 15 — and a few parents — got their first shots.

Public health officials said some Kansas residents were put off by mass vaccination clinics, either because they found the locations or times inconvenient or because they were uncomfortable with the setting. Others who've hesitated to get the vaccine will trust their personal doctors' advice to get shots, they said.

“We do know that people's personal physicians are their most trusted medical adviser," Kelly told reporters after touring the Topeka High clinic.

But public health officials also face the question of how many people still won't get vaccinated, even if they can do it at a doctor's office or in a pharmacy without an appointment.

“We’re reaching a point of saturation for the individuals who are interested in being vaccinated,” said Rowden, the health department administrator in Stevens County.

This story has been corrected to show that the Johnson County health director’s name is Sanmi Areola.