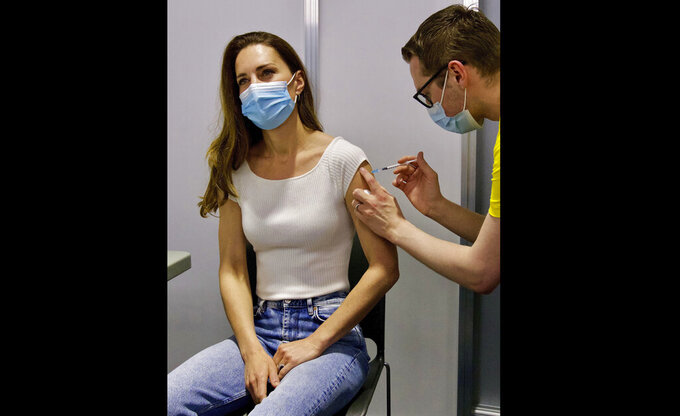 In this photo released by Kensington Palace on Saturday, May 29, 2021, Britain's Kate, the Duchess of Cambridge receives her coronavirus vaccine at London's Science Museum on Friday. (Kensington Palace via AP)

LONDON (AP) — The Duchess of Cambridge has received her first dose of a COVID-19 vaccine as Britain extends its inoculation program to younger people.

Kate, the 39-year-old wife of Prince William, received her shot at London's Science Museum, a mass vaccination center near the couple's home at Kensington Palace, according to a photo posted on their Twitter feed. She got vaccinated a few weeks after her husband.

“I’m hugely grateful to everyone who is playing a part in the rollout — thank you for everything you are doing,” the duchess said in a tweet posted Saturday.

Britain this week extended its COVID-19 vaccination program to everyone over the age of 30. The program has been gradually expanded to progressively younger age groups since it began in early December, and more than 70% of adults have already received at least one dose.

Other members of the royal family, including Queen Elizabeth II and Prince Charles, have publicized their vaccine appointments to encourage people to get shots.