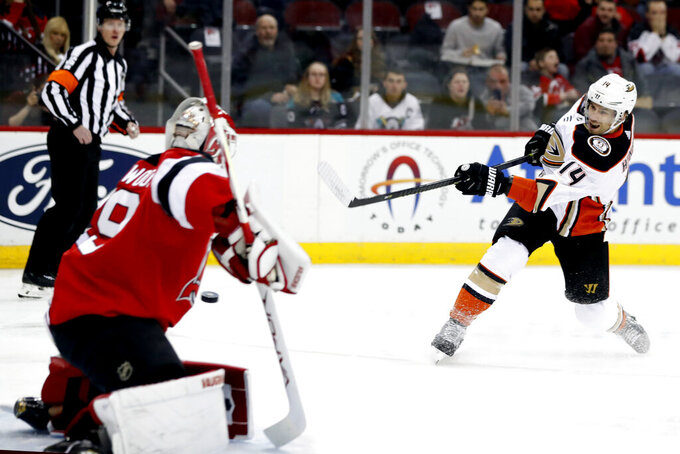 FILE - In this Dec. 18, 2019, file photo, Anaheim Ducks center Adam Henrique (14) scores a goal against New Jersey Devils goaltender Mackenzie Blackwood (29) during the first period of an NHL hockey game in Newark, N.J. Linemates Henrique and Jakob Silfverberg bucked their team's offensive struggles with a pair of impressive seasons, and they will be a foundation of the rebuilding effort. Henrique was particularly productive, leading the roster with 43 points. They are both locked into long-term contracts .(AP Photo/Kathy Willens, File)

ANAHEIM, Calif. (AP) — The last time the Anaheim Ducks missed the playoffs in back-to-back seasons, they went all the way to their franchise's first Stanley Cup Final just one year later.

Not many observers expect the current Ducks to duplicate the feats of those beloved 2002-03 Mighty Ducks after they complete another long offseason made even longer by the coronavirus pandemic.

These Ducks are still in full rebuilding mode after winning just 29 of their 71 games this season, including a Western Conference-worst 24 non-shootout victories. The Ducks were in sixth place in the Pacific Division standings primarily on the sturdy strength of goalies John Gibson and Ryan Miller, who bailed out their teammates all winter long.

Just three years after the Ducks reached the conference finals for the second time in three seasons, a long road back to Cup contention appears to loom in Orange County. Anaheim got largely disappointing performances from its collection of forwards — a star-free group outside captain Ryan Getzlaf — and the blue line was inconsistent while coach Dallas Eakins worked young talent into the lineup amid injuries and trade departures.

But during a second straight season without a playoff appearance — matching their total playoff-less seasons over the previous 13 years combined — Eakins and general manager Bob Murray saw signs of the team they want the Ducks to become. They'll have an extra-long offseason to contemplate the next steps to get there.

“While we would have preferred to conclude our season normally and play 82 games, it became obvious over time that was not practical," Murray said this week. "We remain excited about our future and can’t wait for the 2020-21 season.”

Perhaps appropriately for a team with a long-standing reputation as an intimidating, defense-first organization, the Ducks' biggest problems during their two-year playoff drought have been all about offense. Eakins was hired last summer to implement a speed-based system designed to produce more scoring opportunities, but it’s just not happening yet.

One season after Anaheim finished last in the NHL in goals, its minus-39 goal differential this season was the conference's worst. Anaheim scored two or fewer regulation goals in a whopping 39 of its 71 games. Only Adam Henrique (26 goals) and Jakob Silfverberg (21) found the net with any frequency.

The Ducks' problems ranged from Rickard Rakell's two-year regression to the disappointing numbers from youngsters who weren't ready to produce at the highest level. Murray also curiously gave up on Ondrej Kase and Daniel Sprong in February, trading two young forwards with clear NHL-caliber scoring ability when they didn't produce enough for his liking.

Gibson and Miller didn't post impressive statistics, but anybody who watched these Ducks knew their most valuable players were between the pipes. Gibson's game has grown and matured even while his team has regressed, and the 39-year-old Miller still shows no drop-off in his abilities. If Miller decides to return for another NHL season, he'll have the chance to pass Dominik Hasek on the NHL's career victories list — and the Ducks won't have to worry about this vital position for another year.

The Ducks have an 8.5% chance of getting the No. 1 overall pick in the NHL's complicated draft lottery. Anaheim hasn't had a top-five draft pick since 2005, when it snagged Bobby Ryan with the second overall choice. Murray and his scouting department have a long history of finding impressive talent outside the first round, but they'll likely have the opportunity to choose a game-changing star this summer for the first time. The Ducks also have Boston's first-round pick from their trade of Kase.

Anaheim’s collection of defensemen appears to be thoroughly average, and none seems likely to get much better. Cam Fowler, Hampus Lindholm and Josh Manson are solid pros, but they're likely past the points in their development where they could become stars. The Ducks could use an injection of game-changing talent on the blue line.

Linemates Henrique and Silfverberg bucked their team's offensive struggles with a pair of impressive seasons, and they'll be a foundation of the rebuilding effort. Henrique was particularly productive, leading the roster with 43 points. They're both locked into long-term contracts.

The 35-year-old Getzlaf will head into the final season of his contract later this year when he begins his 16th season with Anaheim. The playmaker still racked up 29 assists this season despite finishing the year on a line with Danton Heinen and Sonny Milano, two 24-year-old recent additions with a combined 59 career NHL goals. It's a long way down from his heyday with Corey Perry, but Getzlaf appears eager to keep working on the Ducks' rebuilding project.