Duke's Krzyzewski eager for a final run with the Blue Devils 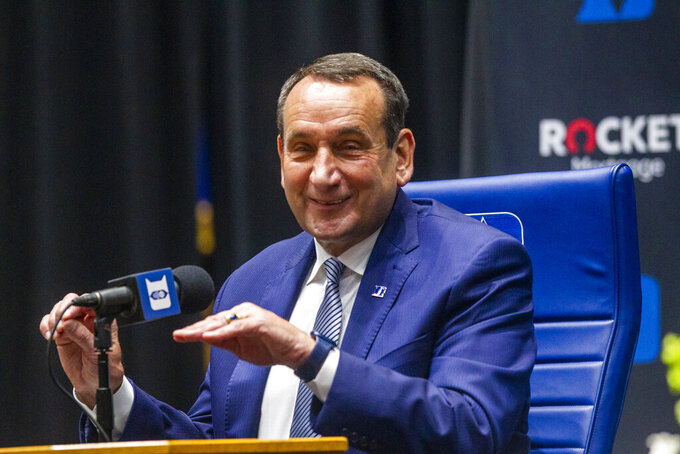 Duke University basketball coach Mike Krzyzewski speaks during an NCAA college basketball news conference Thursday, June 3, 2021, at Cameron Indoor Stadium in Durham, N.C. Krzyzewski, the winningest coach in the history of Division I men's college basketball announced that next season will be his last with the Blue Devils program he has built into one of college basketball’s bluebloods. The school named former Duke player and associate head coach Jon Scheyer as his successor for the 2022-23 season. (Travis Long/The News & Observer via AP)

DURHAM, N.C. (AP) — Mike Krzyzewski had pondered for years when it would be the right time to leave a Hall of Fame coaching career that he has long loved.

Now Krzyzewski and the Blue Devils have committed to a plan: coach a final season in a farewell tour of sorts for one of the college basketball's icons, then hand off to a trusted successor. And he's eager for that chance, particularly after a bumpy season.

“There's nothing sad about this,” the 74-year-old Krzyzewski said Thursday. “This is not sad. I'm happy. I'm excited."

The winningest coach in the history of Division I college basketball announced Wednesday that next season will be his last with the Blue Devils program he has built into one of college basketball’s bluebloods. Thursday's news conference was held at the Blue Devils’ famously hostile Cameron Indoor Stadium – on the court bearing Krzyzewski’s name, no less.

“I’m a lucky guy,” Krzyzewski said. “And we’re going to go for it as much as possible, as much as we can this year, and we’re going to try to return this place into being what it’s supposed to be. And then we’ll be able to walk away to another part of what we’re doing.”

Krzyzewski said he has no health concerns and wasn’t leaving in reaction to the difficulties of playing last year amid the COVID-19 pandemic or the changing landscape of college basketball. Rather, he described the decision as one that has come after years of contemplation and a desire to spend time with family and “live a little bit through them” when discussing his grandchildren.

The school has named former Duke player and associate head coach Jon Scheyer as Krzyzewski’s successor for the 2022-23 season, with Scheyer’s news conference scheduled for Friday.

In the meantime, there's the drive to help Duke regroup after missing the NCAA Tournament for the first time since 1995, which came while playing with no “Cameron Crazies” fans amid COVID-19 protocols.

In a social media post Wednesday night, the program billed Krzyzewski's final season as “The Last Ride" as the Blue Devils add one of the nation's top recruiting classes. The coach — with five national championships in 41 seasons with the Blue Devils and 1,170 career wins going back to his time at Army — knows it will add a bit of extra juice to games next season, too.

“Once they throw the ball up, they want to beat us even more because it’s the last time, right?” Krzyzewski said. “Come on, as a competitor, I know that.”

Swingman Wendell Moore Jr. said the players know it, too.

“We just want to make this season as great as possible for not only us but for him — and really just to give him one last thing to go out with on top,” Moore said. “And hopefully we can get that for him.”

Krzyzewski got emotional multiple times when talking about his career, including about the late athletic director Tom Butters — who hired an unknown Krzyzewski in March 1980 and stuck with him after consecutive 17-loss seasons early in his tenure.

Krzyzewski went on to lead the Blue Devils to 12 Final Four appearances and a record 15 ACC Tournament championships, while his teams have spent a record 126 weeks ranked at No. 1 in the AP men’s college basketball poll. He surpassed Army mentor Bob Knight's men's Division I career victory record in November 2011.

Now he's down to a final season to add to that list and savor the sport he loves, including potentially having fans back at games.

“Come back in August, man,” Krzyzewski said in a message to Duke students. “We're going to be ready. You be ready and let's see what happens. Let's see what the hell happens. It's going to be an exciting year. I'm looking forward to it.”