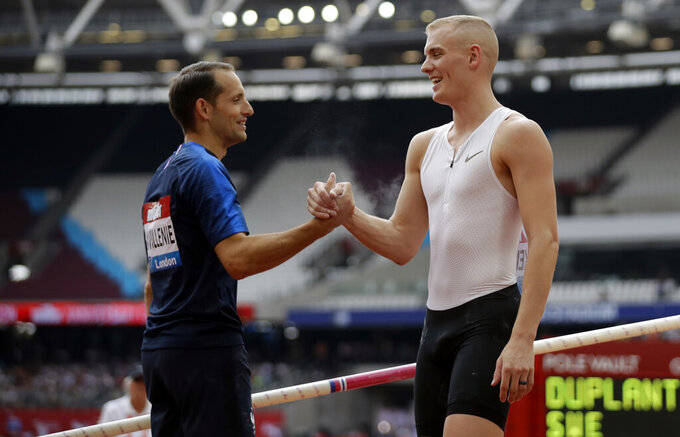 FLE - In this July 21, 2018, file photo, second placed Renaud Lavillenie of France, left, shakes hands with winner Sam Kendricks at the men's pole vault event at the IAAF Diamond League athletics meeting in London. The three biggest names in men’s pole vault will compete against each other from their own backyards, Sunday, May 3, 2020, in a rare sporting event during the coronavirus pandemic. Video links will connect world record holder Mondo Duplantis, world champion Sam Kendricks and former Olympic champion Renaud Lavillenie. World Athletics calls it “The Ultimate Garden Clash” and will stream it on social media. (AP Photo/Matt Dunham, File) 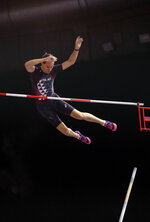 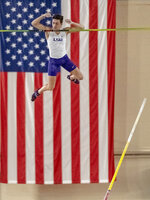 It was for backyard bragging rights. So he raised his intensity.

Lavillenie and Mondo Duplantis of Sweden shared the gold medal Sunday during a men’s pole vault competition held in their own yards. Advertised as the “Ultimate Garden Clash,” it was a rare sporting event contested during the coronavirus pandemic.

Duplantis, a world record-holder, and Lavillenie, the 2012 Olympic champion, each cleared a height of 16 feet (4.9 meters) 36 times over a span of 30 minutes that was broadcast by World Athletics on its social media channels. Both had one miss. Sam Kendricks of the United States got the bronze by clearing the bar 26 times in a competition featuring three of the event's biggest names.

It just might have been a preview of the Tokyo Games, which have been postponed to 2021. Lavillenie certainly took his concentration to another level.

“It’s crazy, but even doing this in my garden, I get the same feeling I’d get at a major championships," Lavillenie said. "It was very exciting and I’m very happy to be a part of it.”

They tried to figure out a tiebreaker before electing to share the gold. The 20-year-old Duplantis initially pushed for a three-minute playoffs format that was on the table, while the 33-year-old Lavillenie nixed the plan. He was exhausted.

Lavillenie did vault over his 36th successful bar just ahead of Duplantis. The event was split into two 15-minute sessions with a short halftime.

“I will give you a rematch, Mondo,” he playfully said at the end.

The backyard idea was brought forth by Lavillenie, and the trio collaborated on the unique competition format because adjusting the bar wasn’t practical without officials in place.

Duplantis competed from his base in Lafayette, Louisiana, with his setup next to a garden wall. Kendricks was at his farm in Oxford, Mississippi, with his landing mat nestled between trees and near a fence where a horse occasionally was caught on the video feed.

Then there was Lavillenie, who took part from Clermont-Ferrand, France. The family’s trampoline was pushed to the side and there was a swingset in the background.

Don't expect this to be a new pole-vaulting format, though. This was only for show.

"I want to jump high,” said Duplantis, the American-born vaulter who represents Sweden and broke Lavillenie’s world record in February. “I want to jump a little higher.”

Still, it made for entertaining theater.

“The general sense of this competition was just supposed to be fun,” said Kendricks, the two-time world champion. “A way to eat up time on a Sunday and give a chance for everybody to watch.”

Among those watching was World Athletics President Sebastian Coe, who gave the competition high marks.

“This is a brilliant initiative, great fun and really innovative,” Coe said in a statement. “My thanks go to them, their families and the World Athletics team for bringing live athletics back during lockdown. I hope we can bring a few more events like this to bring to all athletics fans out there.”

It's already a hit among those in the track and field community.

“I love this idea so much,” 200-meter world champion sprinter Noah Lyles posted in a social media chat room for the event. “It’s such a great new way to compete.”

Duplantis, Lavillenie and Kendricks treated it almost like a track meet as they tried to average a jump per minute. The routine was simple: Vault, walk back with the pole, take a very quick breather — maybe a sip of water — and vault again.

Above all else, it was competition again. The outbreak of COVID-19 has the track and field season on hold.