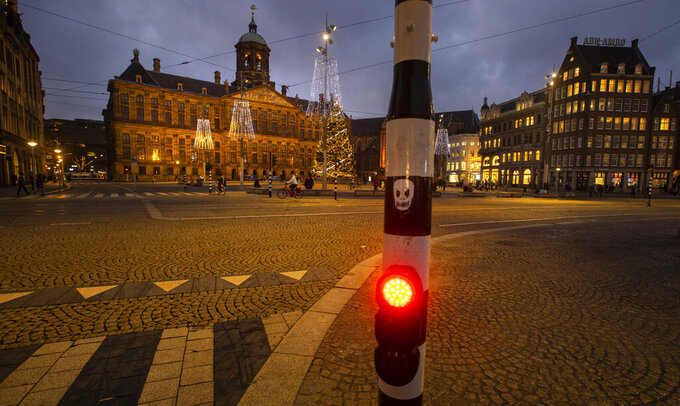 FILE- In this Tuesday Dec. 15, 2020, file photo, A skull is glued onto a traffic light on the near-empty Dam Square with the Royal Palace, seen center rear, in Amsterdam, Netherlands. The Dutch government said Wednesday, Jan. 20, 2021, that it wants to impose a curfew as part of beefed-up restrictions to rein in the spread of new more contagious variants of the coronavirus that already accounts for at least one in every 10 Dutch infections.(AP Photo/Peter Dejong, File)

THE HAGUE, Netherlands (AP) — A majority of Dutch lawmakers backed the government’s planned curfew Thursday, despite fierce criticism from some opposition legislators.

The four parties that make up the ruling coalition and several opposition parties backed a curfew from 9 p.m. to 4:30 a.m. — shifting the start a half hour later than originally planned. The measure likely will come into force Saturday.

The government on Thursday also announced an extension of financial support measures to business, pumping an extra 7.6 billion euros ($9.2 billion) into efforts to prop up ailing businesses and protect jobs amid the crippling economic downturn caused by the pandemic and lockdown.

Prime Minister Mark Rutte said a curfew is needed to rein in the spread of COVID-19, but some opposition lawmakers angrily denounced it as an excessive restriction of liberties.

Rutte said that medical experts have warned the government that the threat of more contagious variants “is so serious that you have to impose this terrible measure of a curfew in addition to the existing lockdown measures.”

Geert Wilders, leader of the largest opposition party, called the proposed curfew “a sign of utter impotence and panic” from the government.

“We are being imprisoned at home on the orders of Mark Rutte. If you leave home without his permission, you get a fine. We are losing our freedom en masse and that is no fun. Believe me, I know what I’m talking about,” said Wilders who has for years lived under round-the-clock security because of death threats prompted by his strident anti-Islam policies.

The lengthy parliamentary debate underscored growing frustration at months of restrictions intended to tackle the pandemic, which has killed more than 13,000 people in the Netherlands.

With the government in caretaker mode since resigning Friday, it needs approval from lawmakers to impose the curfew. After hours of debate in parliament, it remained unclear if a majority would support the measure. Rutte’s coalition quit over a scandal involving thousands of parents wrongly being labeled fraudsters by the country’s tax office.

Tunahan Kuzu, of the Think party, warned that Rutte's proposal would turn the Netherlands into a “police state," while other lawmakers urged the government to better enforce existing lockdown measures such as the call for people to work from home.

The Netherlands joins other European Union countries that have told people to stay home after dark, including Belgium, France, Italy, Greece and parts of Germany.

The Netherlands has been in a tough lockdown since Dec. 15. Numbers of infections and hospital admissions have been declining in recent weeks, but health authorities are concerned that the more infectious mutation of the coronavirus first detected in Britain will make up the majority of Dutch cases by mid-February.