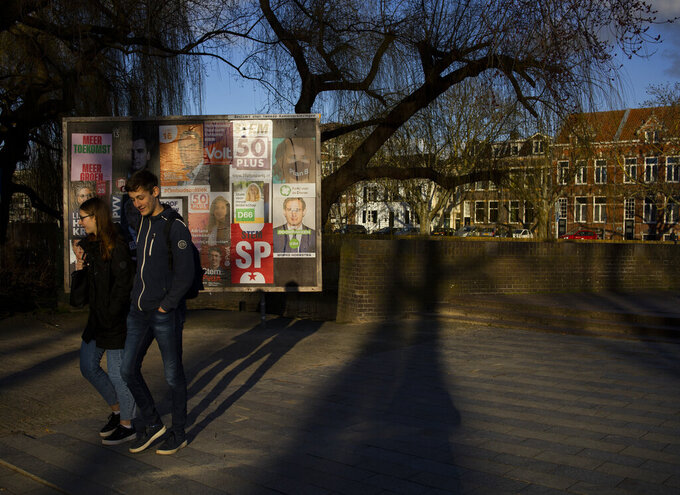 Two people pass election posters in Den Bosch, Netherlands, Friday, Feb. 26, 2021. After more than a decade in power, a recent scandal that forced him to resign and a year battling the coronavirus, Dutch Prime Minister Mark Rutte's popularity, heightened by his handling of the pandemic, remains high less than a month before a general election. But it is showing signs of eroding along with support for his country's tough COVID-19 lockdown as the vote approaches. (AP Photo/Peter Dejong) 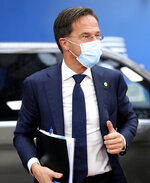 THE HAGUE, Netherlands (AP) — After more than a decade in power and a year spent battling the virus, Dutch Prime Minister Mark Rutte's popularity — boosted by his handling of the pandemic — remains high two weeks before a general election.

But amid a tough COVID-19 lockdown, that support is showing signs of eroding as the Dutch grow weary of pandemic restrictions.

The election is being held over three days, starting with a limited number of polling booths opening on March 15 and 16 for people who are extra vulnerable to the coronavirus before the main voting day on March 17. Some 2.4 million people aged over 70 are entitled to vote by mail.

It's shaping up as a referendum on the government's handling of the unprecedented health crisis and political parties' differing plans for the country's economic and social recovery when it finally ends.

Rutte's conservative People's Party for Freedom and Democracy, or VVD, is currently projected to win about twice as many seats as its nearest rival in the 150-seat lower house of parliament.

Political science professor Tom van der Meer of Amsterdam University says the VVD's huge lead in the polls is partly a result of the pandemic.

“The popularity of Mark Rutte ... got a big boost last year due to the COVID-19 crisis,” Van der Meer said.

Rutte’s regular TV appearances — to explain new lockdown measures, relax some restrictions or announce multibillion state support packages for ailing businesses —have cast him as a strong, dependable leader working tirelessly to protect his nation from the worst of the pandemic.

But with the election approaching, support for the virus lockdown is fading and many Dutch businesses are growing increasingly angry at being shuttered for months. The Netherlands has seen over 15,700 deaths in the pandemic and officials fear the impact of the highly transmissible and more deadly U.K. virus variant.

“We see that this rally-around-the-flag effect has diminished,” Van der Meer said. “But at the same time, voters for the VVD haven’t really yet had this clear reason to move away.”

If the VVD emerges as the largest party in parliament, the 54-year-old Rutte will be first in line to form the country's next governing coalition and begin a fourth term in office. That would make him the longest-serving Dutch prime minister, overtaking the 12-year tenure of Ruud Lubbers.

Opposition parties, however, are keen to stress their differences with Rutte, even though they have largely supported his government's efforts to rein in the pandemic. Parties on the left accuse him of running the country's health service down with years of market-driven reforms.

Rutte's ongoing popularity is all the more striking because his government resigned in January over a scandal involving tax office attempts to root out fraud among parents claiming child benefit payments, leaving Rutte as a caretaker leader. A parliamentary inquiry concluded last year that tax office policies that included racial profiling violated “fundamental principles of the rule of law.”

In the campaign's first major televised debate on Sunday, Rutte was confronted by one of the parents, Kristie Rongen, who told him: “You have failed me.”

“Why do you think that you can stay on as the person who is ultimately responsible in the benefit scandal?” she asked.

“I asked myself the same question,” Rutte replied. “This is such a stain, such a debacle, but I weighed up that so many things have gone well in the last 10 years and that I’m proud of and I decided in the end to keep going."

The largest Dutch opposition party is the Party for Freedom led by populist, anti-Islam lawmaker Geert Wilders, who has harshly criticized the government's handling of the COVID-19 crisis, from the slow start of its vaccination program to its imposing a curfew.

But most mainstream parties reject the idea of working in a coalition with Wilders because of his strident anti-Islam rhetoric, effectively putting his party out of the running to join a new government.

The right-wing populist Forum For Democracy, which performed strongly two years ago during a provincial election, has imploded over the last year amid reports of anti-Semitism in its ranks. Some key members have left and set up a rival party that is fielding candidates in the March election.

That new party is among a record 37 groups registered to take part in the election, a further fragmentation of the Dutch political landscape that could make forming a new ruling coalition tricky. After the last election in March 2017, it took a post-World War II record 225 days to form Rutte's third Cabinet.

Labor Party leader Lilianne Ploumen has appealed to left-leaning parties to work together, saying “if we don't, the only one laughing will be the VVD.”

Follow all AP developments on the coronavirus pandemic at https://apnews.com/hub/coronavirus-pandemic.