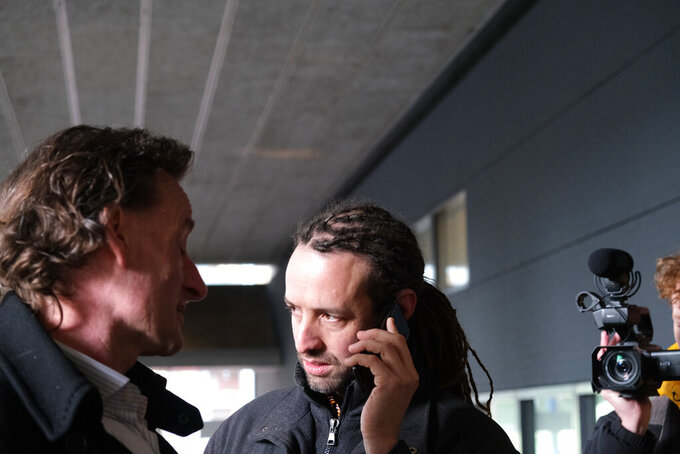 The leader of the coronavirus-skeptical group Viruswaarheid, or Virustruth, Willem Engel, and the group’s legal advisor, Jeroen Pols, left, enter the court building for an appeal hearing into the Dutch government’s curfew in The Hague, Netherlands, Friday, Feb. 19, 2021. The government is appealing a ban on the curfew imposed earlier this week by a judge in The Hague. (AP Photo/Mike Corder)

THE HAGUE, Netherlands (AP) — Dutch senators late Friday approved hastily drawn up legislation underpinning the country's coronavirus curfew, ensuring that it will remain in force at least until early March despite a court order on Tuesday that it be scrapped.

The vote — nearly an hour after the 9 p.m. start of the curfew — was a victory for the government in its two-pronged battle to ensure the measure remains in force amid fears that more transmissible COVID-19 variants will reverse a weeks-long decline in infections.

Several opposition parties joined government senators in approving the legislation by a 45-13 vote, after a debate with Justice Minister Ferd Grapperhaus that lasted several hours.

Earlier Friday an appeals court said it will take a week to decide whether to overturn the ban on the curfew that was imposed by a judge, in an injunction filed by a group called Viruswaarheid, or Virustruth, that opposes the national lockdown. Their decision was rendered largely irrelevant by the senate vote.

A clear majority of lawmakers in the lower house of parliament, including a number of opposition parties, approved the legislation Thursday.

The 9 p.m. to 4:30 a.m. curfew sparked rioting when it was introduced last month but is broadly supported and adhered to.

In a summary judgment Tuesday, a judge in The Hague rejected the legal basis for the curfew, saying that the situation was not urgent enough for the government to use a law allowing it to act swiftly in acute emergencies such as a major breach of the dikes that protect the low-lying Netherlands from high water.

In court Friday, government lawyer Reimer Veldhuis used the dikes as a metaphor for the coronavirus pandemic that has caused more than 15,000 confirmed deaths in the country.

“Just before the introduction of the curfew, the water was splashing against the dike,” he told the appeals panel.

He said the government's scientific advisors warned it of a “third wave bearing down on the Netherlands” swelled by the more transmissible variant of the virus first discovered in Britain.

“In those circumstances, the Cabinet believed it had to take emergency measures in the form of a curfew,” Veldhuis said. “To remain in the metaphor, the water level had to be reduced as quickly as possible to make room for the new wave approaching us.”

However, Viruswaarheid lawyer Gerben van de Corput told the court that the initial ban was correct and should be upheld because the government did not need to use the emergency legislation.

Citing one of the government's advisors who has called the looming threat of more contagious variants a “dark cloud,” Van de Corput told the judges, “a dark cloud is clearly something different to a dike breach.”

The Netherlands has been in a tough lockdown since mid-December, sending infection numbers slowly lower.