In early going, Biden floods the zone with decrees 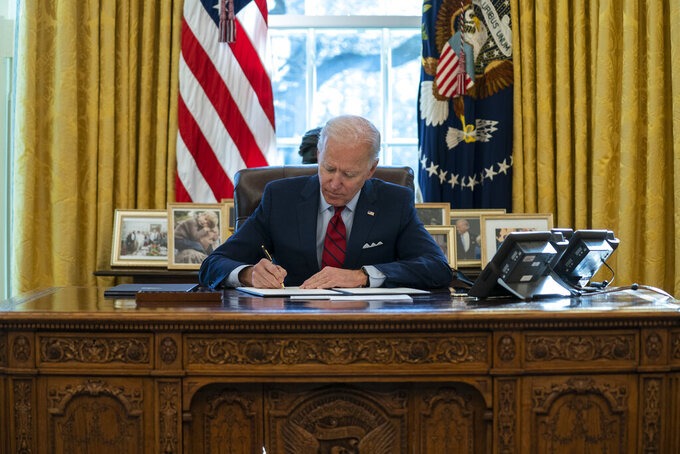 FILE - In this Jan. 28, 2021, file photo President Joe Biden signs a series of executive orders on health care, in the Oval Office of the White House in Washington. (AP Photo/Evan Vucci, File)

WASHINGTON (AP) — Modern American presidents have found that a good way to get off to a fast start in office is to issue decrees like an ancient king.

With a pen as their scepter, they "hereby proclaim.” They “order,” “direct," “revoke” and ”declare," rendering commandments in regal language drawn from the deep past. President Joe Biden is flooding the zone with them, achieving head-snapping changes in national policy that he would have no hope of getting from Congress quickly, if at all.

Easy come, though, can also mean easy go. As President Donald Trump discovered with his hard-charging and often ill-fated executive actions, courts can be quick to shoot them down. Congress can effectively override them and at most they're only good until a contrarian president takes over and whipsaws off in another direction again.

Can transgender troops have a life in the armed forces? Not openly under Trump. Under Biden, yes they can. Under who comes next, who knows?

For now, though, the lumbering government is seeing change at light speed.

In Biden's opening days, he put the U.S. back into the Paris climate accord, ended Trump's restrictions on travel from some Muslim-majority countries, froze further construction of Trump's border wall, protected immigrants who were brought to the U.S. illegally as children, and reversed Trump's rollback of energy efficiency and pollution standards. That's just a sampling.

Altogether, Biden has brought a transformation both in tone and substance in the earliest days of his presidency. After the bellowing, never-self-questioning Trump, almost anyone would.

Twitter is a dead zone now for seeing what's on a president's mind in the moment. Things are being heard from the Oval Office that are foreign to our ears in recent times: “Correct me if I’m wrong.” “How can I say it politely?” “I misspoke.” Wearing a mask is mandated on federal property and encouraged everywhere; meantime the gags have come off the government's top public health scientists.

But Biden's expressions of humility and his common courtesies only go so far. When it comes to dismantling a predecessor's legacy with the stroke of a pen and the words “I have hereunto set my hand,” Biden is off to a fierce start and, like many before him, testing the limits of what a president can do by decree.

“A lot of what he has done has been unwinding what Trump had done,” said Kenneth Mayer, a University of Wisconsin-Madison political scientist and expert on presidential powers and executive actions. “Virtually all presidents push the envelope and do things that expand the scope of executive authority.”

President Barack Obama struck a multinational nuclear deal with Iran and shaped and joined the Paris accord without Congress signing on, using the recognized authority of presidents to make international deals but leaving those moves vulnerable without the assent of lawmakers. Trump withdrew the U.S. from both.

Unable to get Congress to pass immigration legislation, Obama unilaterally shielded young immigrants from deportation, leaving nothing in law to guarantee their protections would last.

For most of his first year in office, until his tax cuts passed in late 2017, Trump chalked up no major legislative achievements despite having Republican control of Congress at the time. He did not score many big wins in law after, either, beyond budget agreements. But he was relentless with executive actions.

“Every president looks for those opportunities," Mayer said. “What Trump did was take the brakes off and do things that previous presidents had not done. He was enamored of his own powers. He was unusually aggressive and didn’t respect the norm-based limits of what presidents ought to do.

“A lot of it was really quite sloppy,” he added. "Shockingly incompetent.”

Trump's orders to restrict entry from some Muslim countries were repeatedly blocked by federal judges until a weakened version passed muster at the Supreme Court. He declared a national emergency when no nationally recognized one existed at the southern border, allowing him to redirect some money already approved by Congress, but for other purposes, to his border wall.

Then there were the federal lands and waters that past presidents had acted to protect from development. Trump had his eye on them.

“For over 100 years, it was the accepted meaning of declaring national monuments that it was a one-way door,” Mayer said. “You couldn’t undeclare a national monument.” But that custom shattered in 2017 with Trump's executive action to review or shrink the protected status of vast acres of national monument lands.

Biden moved to counter that with an order of his own. But his rollout of executive actions several months in the making has not been entirely smooth.

In Texas, a federal judge issued a temporary restraining order barring the government from enforcing a 100-day deportation moratorium on most deportations, ruling the new administration had failed to provide “any concrete, reasonable justification” for it.

Biden has acknowledged the limits of his early course of unilateralism as he gears up for heavy lifts with Congress on pandemic relief and his ambitious legislative agenda. Merely ruling by “executive fiat,” he said, would “get us virtually nowhere.”

Republicans growled about Biden's busy signature pen, voicing the standard complaint about presidential overreach that comes from whichever party is out of power in the White House.

Biden was a bit testy about the pushback when he was asked if Congress might require him to send the pandemic relief package in chunks instead of as a whole. “No one requires me to do anything,” he said with a monarchical flourish.

Biden burst out of the gate with several dozen executive actions. It remains to be seen whether he'll surpass the unilateralism of Trump, who signed an average of 55 executive orders a year, the most in any single term since Jimmy Carter, who averaged 80 a year.

On this front, the king among presidents is Franklin Roosevelt, who signed 307 a year on average and paired that activism with towering legislation steering the country through depression and war.

If executive action is often fleeting, legislation is anything but.

Although there's no permanence in anything Washington does, hard-won legislation typically sinks deep roots. So it has been with “Obamacare,” the law Republicans swore to upend from the start but never could.

Trump's first executive order, on the day of his inauguration, was directed squarely at unraveling the Affordable Care Act. But presidential decree could not take away what Congress had ordained, and neither could repeated efforts by Republican lawmakers to vote it out of existence.

Biden had an executive order on that matter, too. On Thursday he ordered the law's health insurance markets to reopen for a special sign-up window, giving the uninsured a chance to find coverage in a raging pandemic after the Trump administration had refused to take that step.

He ordered his administration in the same document to examine other Trump health care policies that he may nullify, like certain work requirements for Medicaid and curbs on abortion counselling.

It's all an effort to “to undo the damage Trump has done,” Biden said, and to restore things “which by fiat he changed.”

Now, across the range of public policy, fiat chases fiat.