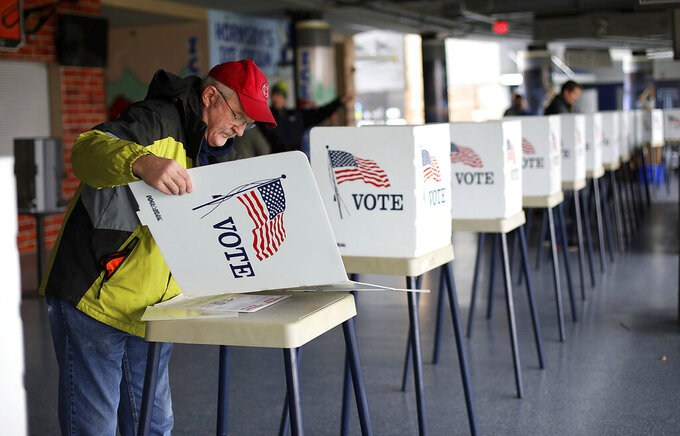 OKLAHOMA CITY (AP) — Early in-person voting began Thursday across Oklahoma for an election that has already seen record turnout throughout the U.S.

Polls are open from 8 a.m. to 6 p.m. at most of the 77 county election board offices on Thursday and Friday, and from 9 a.m. to 2 p.m. on Saturday. In Tulsa, early voting was taking place at the minor league baseball stadium, ONEOK Field, to accommodate more voters and allow for better social distancing as the coronavirus continues to surge in Oklahoma and beyond.

Even before early in-person voting began, more than 234,000 Oklahomans had already cast absentee ballots by mail, more than twice as many who voted by mail during the last presidential election in 2016.

Despite rain and chilly temperatures, Oklahoma County Election Board Secretary Doug Sanderson said voters were lined up more than two hours before the polls opened Thursday in Oklahoma City.

“I would say it's been pretty heavy turnout, pretty steady," Sanderson said.

Oklahoma County, the state's largest, was operating on backup power from a diesel-powered generator after an ice storm that pummeled the state earlier this week knocked out power to more than 350,000 homes and businesses.

“The beauty of paper ballots is that there can be voting regardless of whether the power is on or not," Ziriax said. “It might slow things down a bit, but it will still happen."

In Oklahoma's U.S. Senate race, longtime Republican incumbent Sen. Jim Inhofe faces a challenge from Democrat Abby Broyles, an attorney and television news reporter making her first bid for public office. A Libertarian and two independent candidates also will appear on the ballot in that race.

In what is expected to be the most competitive U.S. House race in Oklahoma, first-term Rep. Kendra Horn, the lone Democrat in Oklahoma's congressional delegation, faces Republican state Sen. Stephanie Bice in a race for the 5th Congressional District that includes most of Oklahoma City and two rural counties to the east.