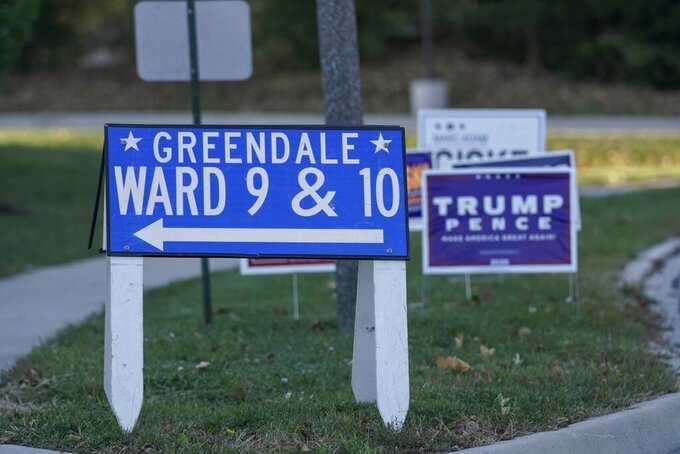 MADISON, Wis. (AP) — After shattering early voting records, Wisconsin voters from the rural north to the urban southeast came out in force on an unusually warm Election Day, even as coronavirus cases reached new heights and political tensions ran high in the battleground state.

There were no reports of widespread problems at the more than 2,400 polls statewide.

Given the high number of absentee ballots, which take longer to process, vote counting was expected to extend into Wednesday. Just over 3 million votes were cast in 2016, and Wisconsin was on pace to exceed that turnout Tuesday, with more than 1.9 million cast early.

“If unofficial results aren’t available until morning, it does not mean something went wrong,” Wolfe cautioned. “It just means that election officials are doing their jobs.”

Members of the Wisconsin National Guard, dressed in civilian clothes, helped fill about 220 poll worker slots statewide, a fraction of the roughly 30,000 people working the polls.

Behind the scenes, work started as polls opened to count the more than 1.9 million absentee ballots that arrived before Election Day. Milwaukee offered a live video stream of its efforts to process ballots in that Democratic stronghold, which wasn't expected to be complete until near dawn Wednesday.

In Outagamie County, workers were duplicating up to 13,500 ballots that had a printing error making them unreadable by the tabulation machines. Wolfe said National Guard troops were sent there to help with the processing, which was proceeding without any problem.

The campaigns of both President Donald Trump and Democrat Joe Biden closely watched absentee and in-person voting for any irregularities that could make a difference. Elections officials urged patience.

Trump won Wisconsin by fewer than 23,000 votes four years ago. Biden sought to put the state back in the Democratic column, where it was for a generation before 2016.

In the week leading up to the election, both Biden and Trump campaigned in parts of Wisconsin where their base is strong. Polls showed there were few undecided voters, making turning out the vote all the more vital for both sides.

In Kenosha, where Trump visited Monday night, 44-year-old Marcus Keith Washington Sr. stood toward the end of a long line of people still waiting to register to vote, less than two hours before polls closed.

Washington, who is Black, has not voted since 2001. But he said he felt compelled to cast his ballot for Biden, citing his concerns with the Trump administration’s handling of the coronavirus and racial injustice.

“I’m just ready for this process to be over," Washington said. "Hopefully tomorrow we’ll have a better situation.”

The coronavirus pandemic motivated over 1.9 million voters to mail in their ballots or vote in person before Election Day, far surpassing the early voting turnout in previous presidential elections. Wisconsin had 3.68 million registered voters as of Sunday, but voters like Washington could also register at the polls.

Early voting constituted roughly two-thirds of the total votes cast in 2016, leading to less congestion than usual at several polling places on Tuesday.

A long line formed at a polling place in West Allis, not far from a field hospital set up to handle overflow coronavirus patients. But that congestion was attributed to the consolidation of polling places in that Milwaukee suburb.

Wolfe said some polling places had longer lines due to social distancing. Voters were being asked to keep a 6-foot distance between one another due to the pandemic. Wisconsin has seen a steady rise in virus cases since September, and on Election Day set a new record high with 5,771 new cases and 52 more deaths.

Even as the pandemic raged, some voters said they preferred casting their ballots in person.

“The slowdown and compromising of the U.S. Postal Service was a concern," said Rebecca Kraft, a 41-year-old from Milwaukee. "I trust in the mail-in ballot system, but there was just too much uncertainty. So I said ‘All right, if I’m feeling healthy, I am going to go do it at the polls just to make sure.’"

On the University of Wisconsin-Madison campus, graduate student Zach Zalewski, from Antigo, worked as a volunteer outside at a registration table. He said the goal was to ensure no one was inside the polling station for more than 15 minutes.

“We also want things to be as safe as possible," he said.