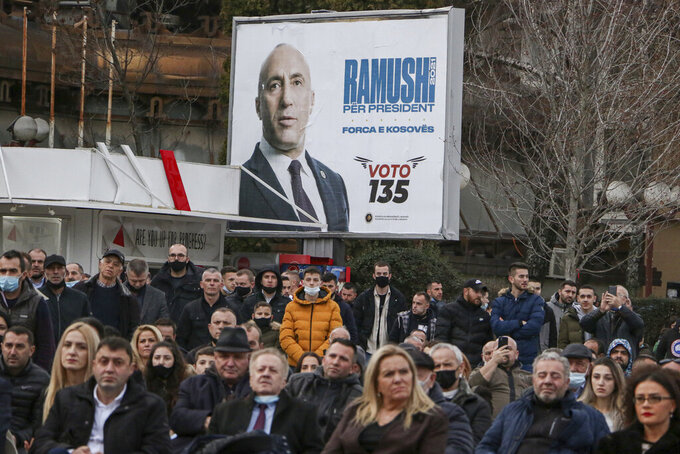 Supporters of Ramush Haradinaj, candidate for prime minister of the Alliance for the Future of Kosova (AAK), gather during a rally in the town of Peja, Kosovo, on Wednesday, Feb. 10, 2021. Kosovo holds an early general election on upcoming Sunday Feb. 14, amid the coronavirus pandemic, economic downturn and stalled negotiations with wartime foe Serbia. (AP Photo/Visar Kryeziu)

PRISTINA, Kosovo (AP) — Kosovo, one of Europe's poorest and youngest countries, is set to hold an early general election Sunday amid the coronavirus pandemic, an economic downturn and stalled negotiations with wartime foe Serbia.

Reducing unemployment and fighting organized crime and corruption remain the biggest challenges facing the next government. The national statistics agency said nearly one-quarter of Kosovo's workers were unemployed at one point last year, while the pandemic slowed the country’s growth by 4.5% in 2020, according to the World Bank.

The election is not expected to result in any single party winning a majority in Kosovo's 120-seat parliament and the right to govern alone. The main contenders for prime minister have pledged billions of dollars to revive the country’s stagnating economy, which could be difficult to secure.

Kosovo does not yet belong to the European Union, which has established a massive pandemic recovery program for its 27 member nations, due to the still-troubled relationship between Pristina and Belgrade.

Acting Prime Minister Avdullah Hoti, of the center-right Democratic League of Kosovo, or LDK, said that at least $1 billion (830 million euros) would come from a U.S. commitment that was part of a September economic pact with Serbia signed at the White House.

“We have an ambitious economic program that would create thousands of new jobs,” Hoti said.

However, all pre-election polls have predicted the opposition Self-Determination Movement, or Vetevendosje!, will win the most votes. Party leader Albin Kurti said a government run by Vetevendosje! would pursue “multiple reforms in order to get out of the multiple crises.”

“We plan to focus on the strengthening of our state, and two key concerns of the citizens of Kosovo are jobs and justice,” Kurti, who served as prime minister for 50 days last year while leading a fragile governing coalition, told The Associated Press.

When Vetevendosje! was an opposition party, it became known of extreme methods like throwing tear gas and water bottles inside the parliament chambers to protest proposed deals with Serbia and other policies it opposed.

“They (voters) have decided, for the second time in a row, to apply the ‘punishment vote’ to those who misgoverned the country for almost two decades,” independent analyst Evliana Berani said.

Kosovo declared independence from Serbia in 2008, a decade after a brutal 1998-1999 war between separatist ethnic Albanian rebels and Serb forces. The war ended in June 1999 after a 78-day NATO air campaign drove Serb troops out and a peacekeeping force moved in.

Most Western nations recognize the country, but Serbia and allies Russia and China have not, and tensions over Kosovo remain a source of volatility in the Balkans.

Kosovo's ethnic Serb minority automatically gets 10 seats in parliament, and typically has played a kingmaker role in any Cabinet putting together the required majority of 61 seats.

Serbian President Aleksandar Vucic has urged Kosovo Serbs to take part in the election and advised them to vote for the Serbian list of candidates, which is strictly controlled by Belgrade.

The Democratic Party of Kosovo, PDK, which is led by former leaders of the wartime Kosovo Liberation Army, also is likely to play a major role in the election.

The party's former leaders, ex-president Hashim Thaci and ex-parliament speaker Kadri Veseli, are on trial at an international war crimes tribunal in The Hague, Netherlands. They are facing war crimes and other charges for their time as guerrilla leaders during the war that killed more than 10,000 people.

European Union-sponsored talks on normalizing ties between Serbia and its former province stalled again last year after talks brokered by the White House summit and Brussels. Resuming the talks has not figured high on any party’s agenda ahead of the election. Hoti repeated Kosovo's condition for any deal, saying Serbia must recognize Kosovo as a separate country.

“There’s no other choice than mutual recognition between the two countries,” he said.

The Pristina-based Council for the Defense of Human Rights and Freedoms has warned that the election poses a serious threat to public health due to the political gatherings held during the brief 10-day campaign.

Political parties have not respected many of the virus-control measures imposed due to the pandemic, including mandatory mask wearing, social distancing, limits on gatherings to no more than 50 people and an overnight curfew.

On Friday, the last day of campaigning allowed, political parties again defied the measures. Hundreds of Kurti’s supporters gathered at Pristina’s Skenderbeu Square. Other parties held small rallies all over the country.

Kosovo has had more than 1,500 virus-related deaths and some 63,000 cases with a significant fall this month compared to a double or a triple figure a month ago.

Within two months of taking their seats in parliament, Kosovo’s lawmakers must elect the country’s president. If no candidate is elected after three rounds of voting, the country might see an early presidential election.