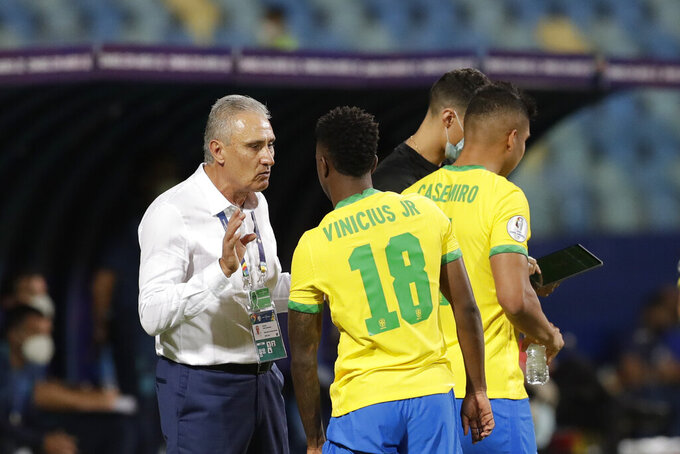 SAO PAULO (AP) — Brazil coach Tite had an emotional exchange with his Ecuador counterpart Gustavo Alfaro after the teams drew 1-1 on Sunday and started looking into the knockout stage of Copa America.

Alfaro and Tite shared a friendly hug after the exchange at the Olimpico Stadium in Goiania. Ecuador's coach insisted Tite should remain in the job despite recent internal problems at the Brazilian soccer confederation. Brazilian media reported Tite could have been fired before Copa America because of his team's resistance in playing the tournament on home soil during the COVID-19 pandemic.

“Don't go, please. Resist because you will end up being world champion, remember what I am saying,” Alfaro told Tite on the pitch after the match. “You dignify this (job).”

Ecuador held a below-strength Brazil to a draw to secure a spot in the Copa America quarterfinals as the fourth-place team in Group B. Brazil had already secured top spot in the group before the match began, allowing coach Tite to leave Neymar and other key players out to rest.

Tite has been a critic of Copa America being held in Brazil in emergency mode. Last week, he was fined $5,000 by South American soccer's governing body, CONMEBOL, for saying during a June 12 news conference that the tournament was shifted to his country in a “confusing manner.” CONMEBOL confirmed Brazil as the tournament's host less than two weeks before the opening match.

Brazil's players reportedly threatened to boycott the Copa America until only days before they started their title defense on June 13. They published a letter before the tournament saying they were “against the organization” of the competition, but “will never say no to the national team.” Tite publicly said he and his assistants agreed.

Later some players, such as midfielder Everton Ribeiro, mentioned concerns about the country's alarming COVID-19 figures, which now total more than 510,000 deaths.

Alfaro, who coached Argentinian giants Boca Juniors and San Lorenzo before his job at Ecuador, confirmed during his news conference that he'd praised Tite during their post-match conversation.

“I admire Tite a lot, I think he is a genius. For us coaches he is a role model for his commitment, his struggle,” Alfaro said. “He can be world champion and, honestly, I would like coaches like that to have their reward.

"That is how you consolidate the struggle of people who dignify the profession, who have a clear and concrete sense to defend the principles of their players. I want coaches and people like that to succeed."

Asked about Alfaro's comments, Tite said he would not reveal them for they were “intimate comments." Then he praised Ecuador's competitiveness and fair play.

“National team coaches are influencers. They are focused, educated. If CONMEBOL agreed, they could give important opinions so the competition improves,” Tite said. “The respect is reciprocal not only for the results, but also because of how each one conducts himself. All coaches have this characteristic of respect, of dignifying the profession.”

Tite was two years into the Brazil job when his team was eliminated in the quarterfinals of the 2018 World Cup by Belgium. Brazil now leads South American World Cup qualifiers for the 2022 tournament in Qatar and is the favorite to defend its Copa America title.