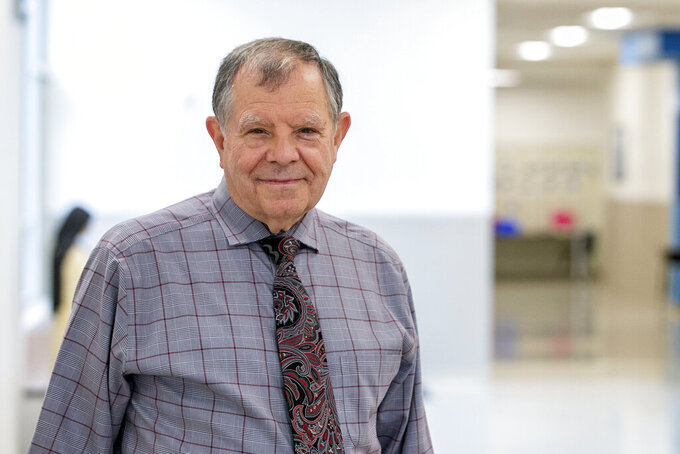 Immaculate Conception school principal Michael Kish, who is retiring after 50 years of being an educator, poses at the school in Columbia, Ill.. (Derik Holtmann]/Belleville News-Democrat via AP)

Then he earned a history degree and toyed with the idea of going to law school.

Then a board member for Immaculate Conception Catholic School in Columbia asked if Kish would be willing to teach eighth-grade social studies after an employee shake-up left them short-handed.

Third time’s a charm, as they say.

“Mr. Kish” ended up working 50 years at the school, including 46 as principal. The 72-year-old is retiring this spring, but not because he’s lost his passion. He just figures it’s time for a new chapter.

“My warranty is about to expire,” he said this week, smiling. “I’m not going to live forever.”

The news is still sinking in for parents, teachers and other staff, many of whom attended the school as children.

That includes school secretary Bev Epplin, 51, her husband Doug and four sons. Kish attended their wedding and baptisms and sang at son Zachary’s funeral when he died of cancer at age 20.

“(Mike) always calls me ‘the heart of the school,’ but lately I’ve been calling him ‘the glue of the school,’” said Epplin, an employee for 25 years. “He keeps us all connected. We’re like one big family.

“He makes you want to be a better person and a better Christian. He always sees the good in everybody. He never says, ‘No.’ No matter how crazy the idea, no matter what you need, he will say, ‘Yes.’ He really is a unique individual. There’s no one else like him.”

Immaculate Conception served about 270 students in first through eighth grades in 1971, when Kish started teaching. That dropped to 180 in the late ’70s before gradually climbing to its current enrollment of nearly 400, which includes kindergarten.

Under normal circumstances, Kish prides himself on knowing every child by name. He often greets them in the hall with smiles and high-fives.

But that’s been a challenge the past year. The COVID-19 pandemic has required everyone to wear masks, stay socially distant, avoid touching and follow other safety precautions.

“That’s my big regret,” Kish said. “I haven’t gotten to know the kids as well, especially the new kids, the little kids.”

COVID-19 aside, students and staff have done their best to honor the beloved principal his last week at the school. Cooks served Kish’s favorite meals in the cafeteria. Eighth-graders wore matching blue T-shirts that read “That’s what I doooooooo!” (It’s one of his common sayings, also known as “Kishisms.”)

And, of course, Dum-Dums were distributed. The school has a running joke that students who get sent to the principal’s office often leave with suckers after meeting with Kish.

“No one wants to get in trouble, and you respect him for sure,” said eighth-grader Will Jansen, 14. “But he’s not the kind of guy you fear. If you have a problem, he’s the guy who helps you.”

Will likes to talk history with Kish and listen to him tell stories about how he found arrowheads and other Native American artifacts that he’s collected.

Kish also visited every classroom this week, entertaining students by singing and playing guitar. He’s a former bassist for a band called “The Sunsets.” They performed at weddings, picnics and other events for more than 20 years.

Michael Kish was one of 11 children born to Al and Betty Kish, who farmed and ran a dry-cleaning business in Columbia.

The family was active at Immaculate Conception church and school. Al Kish served as first grand knight of the local Knights of Columbus council, which was founded in the family’s basement.

Michael Kish left home at age 14 to attend the former St. Henry’s Preparatory Seminary in Belleville, a boarding school that prepared high-school-age boys for the priesthood. He graduated in 1967 then continued his theological studies at Lewis University for a year.

Kish transferred to Southern Illinois University Edwardsville, where he earned a bachelor’s degree in history and later returned for a master’s in educational administration.

It was school-board member Joe Christ, now deceased, who asked him to teach history, geography and science at Immaculate Conception in 1971. Kish also served as unofficial assistant principal, despite his youth and inexperience.

“The school was on a downslide,” he said. “We had no sports teams. We had just fired six teachers. So I came in when there was a big gap that needed to be filled.”

Kish formed basketball and baseball teams, and his wife, Jeanne, served as cheerleading sponsor, even though she didn’t work at the school. He became principal in 1975.

Since that time, Kish has spearheaded curriculum improvements, developed programs for reading and special needs, overseen a major renovation of the school’s former building in 1987 and guided planning for a new building, which opened two years ago.

Kish has worked to make the school less “lockstep” and more “human,” giving students the freedom to laugh while learning, express their individuality and practice self-discipline instead of being told what to do at every turn.

Kish has engaged students in social-justice projects and exposed them to diversity, maintaining a cooperative relationship with Sister Thea Bowman Catholic School in East St. Louis.

Kish took eighth-graders to Washington, D.C., 36 times and also led trips to Chicago and Memphis, where they visited the National Civil Rights Museum.

Kish has seen many changes in education over the past 50 years. Perhaps most significant is the increased sophistication of younger children and the ability of all students to master technology that didn’t even exist when he started teaching at Immaculate Conception.

At the same time, Kish is dismayed by students’ preoccupation with mobile devices, noting that many want to play video games instead of talk to each other when they have downtime on school trips.

“The technology, as beautiful and wonderful as it is, it’s like anything else.... If it’s not in balance, it really hurts you,” he said. “We have too many kids gaming right now. A lot of them game all night. Parents don’t step up and take their devices away from them, and because of that, they want to sleep at school.”

Kish isn’t sure what he’ll be doing after retirement. He plans to stay involved with the school and church and make himself available as an adviser to his replacement, Dave Gregson.

Kish and his wife are building a new house. They also plan to spend time with their three grown daughters and seven grandchildren.

Kish will have to clean out his office, which doubles as a museum, art gallery and library lined with books, mainly on history.

Artifacts include a 1905 cash register that belonged to his parents; a 1912 Gibson banjo once played on a riverboat; Kish’s first guitar; brass bells from the old church; and a brick from the former St. Teresa Academy in East St. Louis, where his mother went to school.

Tears welled up in Mandy Borgmeyer’s eyes on Thursday when talking about Kish’s departure. The first-grade teacher, who attended Immaculate Conception as a girl, can’t imagine the school without him.

Borgmeyer, 40, has been most impressed by Kish’s “boundless” energy, dedication and humility.

“It’s not just his job,” she said. “It’s his life. ... During the summer, he would paint classrooms and fix things. If a kid got sick, he would clean it up. If the toilet got clogged, he would unclog it. Nothing was below him.”

Crossing guard is another role Kish has played on occasion.

The principal seems to get uncomfortable when people praise his accomplishments over the past 50 years. (Another one of his sayings is, “When you lose, say nothing. When you win, say even less.”) He pivots to the importance of faith and the help he’s received from others.

Hanging over Kish’s desk is a portrait of Mother Teresa, who he heard speak at a Chicago conference when he was a seminary student.