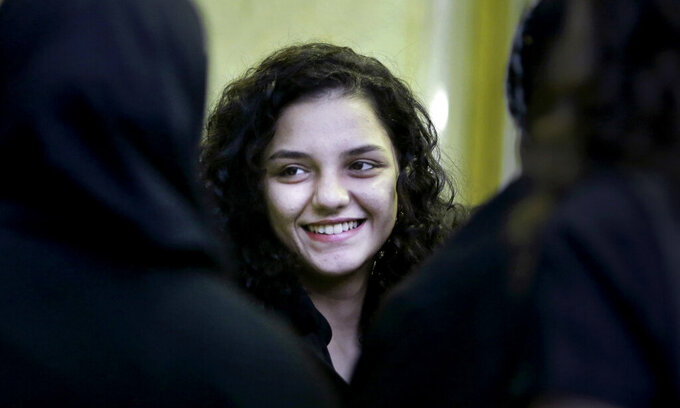 FILE - In this Aug. 30, 2014 file photo, Sanaa Seif, the younger daughter of Ahmed Seif, one of Egypt's most prominent civil rights lawyer and campaigner, receives condolences for her father at Omar Makram Mosque after being temporarily released from prison, in Cairo, Egypt. An Egyptian court on Wednesday, March 17, 2021, convicted Seif, a prominent human rights activist, of spreading false news and insulting a police officer, sentencing her to 18 months in prison. (AP Photo/Amr Nabil, File)

CAIRO (AP) — An Egyptian court on Wednesday convicted a prominent human rights activist of spreading false news and insulting a police officer, and sentenced her to 18 months in prison, her family and lawyer said.

Sanaa Seif, of Egypt's most well-known family of activists, was arrested in June last year. She was accused by prosecutors of “broadcasting fake news and rumors” about the country’s health conditions and the spread of the coronavirus in prisons.

She was also convicted of insulting a police officer on Facebook, her lawyer Hesham Ramada said. He said they would appeal Wednesday’s Cairo Criminal Court ruling to a higher court.

Seif, who has been in custody since her arrest, has denied the accusations.

The verdict has stirred outcry by international rights groups, which accuse Egyptian authorities of waging a broad crackdown on dissent, jailing thousands — mainly Islamists, but also others, including several well-known secular activists.

Amna Guellali, Amnesty International's regional deputy director, condemned the court ruling as “another crushing blow for the right to freedom of expression in Egypt.”

"Egyptian authorities have yet again demonstrated their unrelenting intent to punish any criticism of their dismal human rights record," Guellali said.

Seif was arrested while she and other family members were at the public prosecutor’s office to file a complaint about an attack against them outside Cairo’s Tora prison complex a day earlier, her sister Mona Seif, also an activist, said at the time.

The group had been going daily to Tora hoping to receive a letter from Seif's brother, imprisoned activist Alaa Abdel-Fattah, which they say prison officials had promised to pass on to them.

Seif's father, Ahmed Seif al-Islam, who died in 2014, was a renowned human rights lawyer. Her mother, Leila Soueif, a mathematician, is a prominent advocate of academic independence. Her aunt is award-winning novelist Ahdaf Soueif.

Her brother, Abdel-Fattah, rose to prominence with Egypt’s 2011 uprising. He was arrested following a relatively minor anti-government protest in September 2019.

That arrest came after he had been released in March that year, following five years in prison for taking part in a peaceful protest against the military trials of civilians.

Wednesday’s verdict was not the first against Seif, a film editor who worked on “The Square,” a 2013 Oscar-nominated documentary on the 2011 uprising.

In 2016, she was sentenced to six months in prison after being convicted of insulting a government employee while performing his duties. She also served 15 months of a three-year sentence for demonstrating against a law banning public gatherings, and was pardoned early.