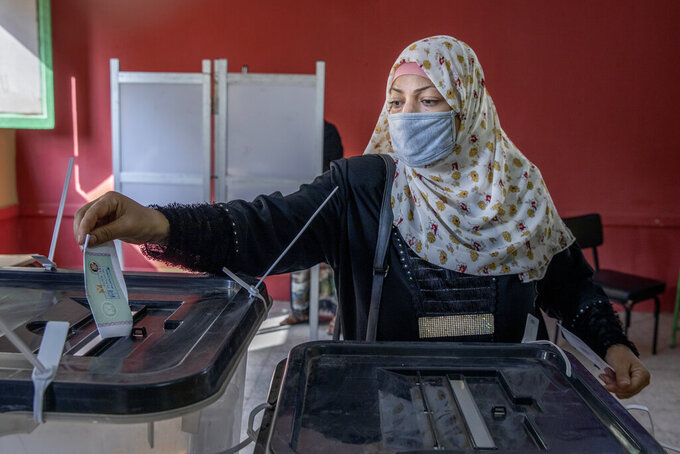 A woman casts her ballot on the first day of the parliamentary election inside a polling station in Giza, Egypt, Saturday, Oct. 24, 2020. Egyptians began voting Saturday in the first stage of a parliamentary election, a vote that is highly likely to produce a toothless House of Representatives packed with supporters of President Abdel-Fattah el-Sissi. (AP Photo/Nariman El-Mofty)

CAIRO (AP) — Egyptians on Sunday trickled into polling stations on the second day of voting for the country’s parliamentary election, amid a slight uptick in daily recorded coronavirus cases.

The vote is likely to produce a toothless House of Representatives packed with supporters of President Abdel-Fattah el-Sissi that further rubber-stamps his policies, leaving the former military general with almost unchecked powers.

A trickle of voters wearing face masks were seen in five polling stations visited by The Associated Press in the city of Giza, part of the Greater Cairo area and home to the famed Great Pyramids, with turnout relatively higher than Saturday’s vote. Face masks are mandatory at polling centers, which were disinfected before and during the vote, authorities said.

Police forces, some armed, were also deployed outside polling centers, while others patrolled the streets. The government has deployed thousands of troops and policemen to safeguard the two-day vote.

A quota of 25% of the seats are reserved for women, according to constitutional amendments approved in a national referendum last year.

The current first stage of the vote for the lower chamber of parliament began a day earlier in 14 of Egypt’s 27 provinces, including Giza and the Mediterranean port city of Alexandria. About 33.5 million voters are eligible to participate in this stage.

The second stage is scheduled for Nov. 7-8 in the country’s 13 other provinces, including the capital Cairo and the restive Sinai Peninsula. The voting concludes with runoff elections.

A total of 568 seats in the lower chamber are up for grabs, with more than 4,000 candidates running as individuals competing for half of the seats. Prominent, wealthy government-affiliated power brokers have an advantage.

The other half of the elected seats in the five-year chamber are reserved for the more than 1,100 candidates running on four party lists. El-Sissi will name 28 seats, or 5%, bringing the total number of seats in the lower chamber to 596.

Some 63 million voters are eligible to vote in the Arab world’s most populous nation. The new chamber is expected to hold its inaugural session shortly after final results are announced in December.

Authorities urged Egyptians to take part in the vote in order to show a high turnout and lend legitimacy to the election. In remote areas like the Kharga Oasis in the western desert, local authorities provided free transportation to encourage people to cast their ballots.

The election commission vowed to enforce a law penalizing any boycotter with a fine of up to 500 Egyptian pounds ($32). In Aug., it said it would refer to prosecutors about 54 million people who did not vote in the recent Senate election.

Only 14.23% of voters participated in the election for the upper chamber, an advisory body with no powers, which was restored following a referendum last year.