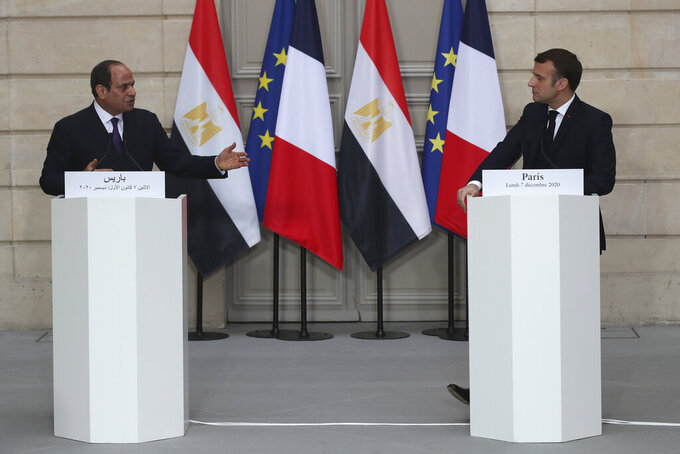 French President Emmanuel Macron, right, and Egyptian President Abdel-Fattah el-Sissi attend a joint press conference at the Elysee palace, Monday, Dec. 7, 2020 in Paris. Egyptian President Abdel-Fattah el-Sissi was meeting Monday with French President Emmanuel Macron for talks on fighting terrorism, the conflict in Libya and other regional issues as part of a state visit to France, amid criticism from human rights groups over the Egyptian leader's crackdown on dissent. (AP Photo/Michel Euler, Pool)

PARIS (AP) — French President Emmanuel Macron acknowledged Monday “disagreements” with Egyptian President Abdel-Fattah el-Sissi over human rights, but said it will not prevent France from reaching economic and defense deals with the North African country, which has seen the heaviest crackdown on dissent in its modern history.

In an unusual exchange following their high-level meeting in Paris, both heads of state also expressed opposing views in a firm but polite, almost philosophical discussion about the role of religious values in society.

Macron welcomed el-Sissi at the Elysee Palace at the start of the Egyptian president's two-day state visit to France. They discussed human right issues in addition to talks on fighting terrorism, the conflict in Libya and other regional issues.

In a joint news conference, Macron said “we have disagreements on that topic (human rights) and we talk about it very frankly.”

Macron called for a greater inclusiveness of civil society in political decision-making process in Egypt, saying it is a better way to fight extremism than “political repression.”

El-Sissi has overseen the toughest crackdown on critics in Egypt in living memory, jailing thousands of Islamists along with pro-democracy activists, reversing freedoms won in the 2011 Arab Spring uprising, silencing critics and placing draconian rules on rights groups.

On Monday, an Egyptian court extended the detention of an activist and researcher who previously worked for one of the country’s most prominent rights groups.

Yet Macron ruled out making France's cooperation with Egypt on economy and defense conditional on human rights issues, because Egypt is France's key partner in the fight against extremism and for the stability of the region.

El-Sissi's state visit was maintained amid the coronavirus pandemic as both countries seek to strengthen their strategic partnership, with a focus on joint efforts to curb insecurity in the Mediterranean and the Middle East. France also ensured Egypt of its support in the health care sector.

Over 20 human rights groups denounced in a joint statement France’s strategic partnership with Egypt as the North African country “is abusively using counter-terrorist legislation to eradicate the legitimate work in favor of human rights and suppress all peaceful dissent in the country.”

They called for a demonstration on Tuesday near the National Assembly in Paris.

With a straightforward tone rarely heard in public, el-Sissi and Macron expressed opposing views in a spirited exchange on what should prevail between religious and human values — while both strongly condemning any extremist attack.

In reference to the publication in France of caricatures depicting the Prophet Muhammad, considered blasphemous by Muslims, el-Sissi said “it’s very important that when we’re expressing our opinion, that we don’t, for the sake of human values, violate religious values."

"The rank of religious values is much higher than human values ... they are holy and above all other values," he added.

Macron responded: “We consider human values are superior to everything else. That's what was brought by the philosophy of the Enlightment and the foundation of the universalism of human rights.”

Under France's secularism, blasphemy is allowed in France, Macron stressed.

“When there's a caricature ... this is not a message from France toward your religion and the Muslim world, this is the free expression of someone who is, indeed, provoking, blaspheming. It is allowed in my country,” he said.

Days before El-Sissi's arrival in France, amid pressure from U.N. and Western activists, Egyptian authorities released three workers with one of the last rights groups still functioning in Egypt. The three staffers of the Egyptian Initiative for Personal Rights, who were detained in November following a meeting with diplomats from Western countries, were released Thursday pending an investigation into charges of belonging to a terrorist group and spreading false news.

El-Sissi often warns that his tough hand ensuring stability is necessary, pointing to war and destruction in Syria, Yemen and Libya as the alternative.

Egypt is a U.S. ally and has deep economic ties with European countries. French authorities see Egypt as a key country in efforts to stabilize the troubled region, and Macron has warned that in the absence of Western support, Egypt could turn to the West’s authoritarian rivals China and Russia.

El-Sissi, as a defense minister, led the military’s 2013 ouster of a freely elected but divisive president. He was elected in 2014 and, and won a second term in 2018, running virtually unopposed. Last year, constitutional amendments approved in national referendum, allowed him to stay in power possibly until 2030.