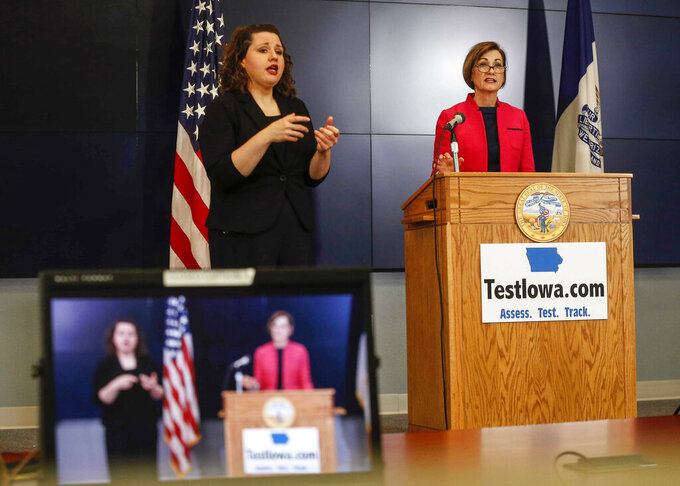 Iowa Gov. Kim Reynolds gave an update on the status of new COVID-19 cases in Iowa during a press conference at the Iowa National Guard in Johnston, Friday, Friday, May 1, 2020. (Bryon Houlgrave/The Des Moines Register via AP, Pool)

WHITING, Iowa (AP) — An Iowa couple who have been married for nearly 70 years are back home after they both recovered from bouts of COVID-19.

Bert McCandless, 88, and his 89-year-old wife, Ardis, contracted the illness caused by the coronavirus in March, The Omaha World-Herald reported. They were hospitalized at Creighton University Medical Center-Bergan Mercy, where Bert nearly didn't make it.

Ardis spent three days in the hospital in late March, but as she started to get better, Bert's condition worsened. He was placed on a ventilator for two weeks and doctors estimated he had no better than a 20% chance of surviving.

On April 24, though, Bert returned to the couple's home in Whiting, a small community about 40 miles south of Sioux City, where Ardis was so happy she climbed onto his lap.

The couple will celebrate 70 years of marriage in October. Both are still recovering, but they're busy again, gardening and visiting with grandchildren and great-grandchildren.

The couple’s daughter, Terri Schaaf, is pretty sure she was responsible for her parents' illness. She believes she picked up the virus on a trip to the Ozarks in mid-March.

Ardis said she was turning blue when she was sent by ambulance to the hospital on March 25. She went home three days later, just as Bert began to fight for his life. He said he had no recollection of a two-week period around the time he was hospitalized.

Dr. Bryan Krajicek said Bert required “every bit of critical care support that we could provide to him in the ICU.”

“In an 88-year-old guy who was that sick, his predicted mortality would be 80 to 90% or beyond, quite honestly,” Krajicek said.

The Iowa Department of Public Health announced 757 new positive cases of the coronavirus on Saturday, bringing the state's total since the pandemic began to 8,641. The actual number of infections is thought to be far higher, though, because many people have not been tested and studies suggest that people can be infected without feeling sick. Gov. Kim Reynolds cautioned Friday that that the case count would jump over the weekend because of a high number of recently-processed tests.