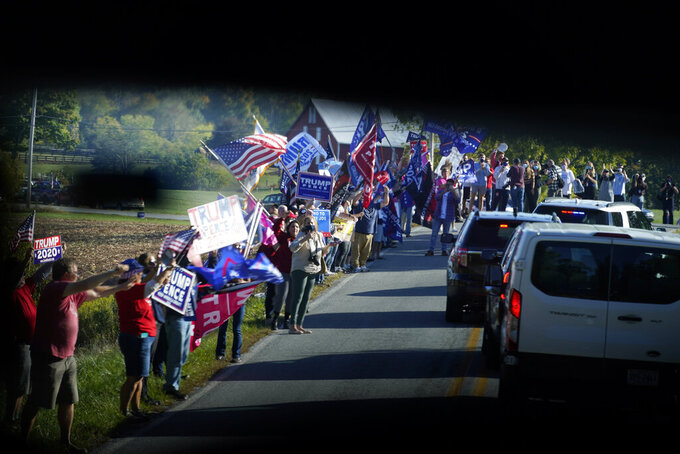 DEBATE NIGHT: Vice President Mike Pence and his Democratic challenger, California Sen. Kamala Harris, are set to face off in a debate that will offer starkly different visions for a country confronting escalating crises. The debate in Salt Lake City is the most highly anticipated vice presidential debate in recent memory. Pence will likely have to defend the Trump administration’s handling of the pandemic, while Harris is expected to address racial injustice and explain her views on law enforcement.

VOTER BEWARE: U.S. officials have issued a series of advisories in recent weeks aimed at warning voters about problems that could surface in the election, as well as steps that Americans can take to counter the foreign interference threat. The issues identified in the public service announcements run the gamut from the spread of online disinformation about the electoral process to cyberattacks targeting election infrastructure.

TRUMP'S TAXES: An obscure function of Congress may have once put President Donald Trump’s tax information in the hands of congressional staff. But even if it did, that doesn’t mean staffers can give access to Trump’s tax returns to lawmakers, at least not legally. The audit of Trump’s taxes, The New York Times reported, has been held up for more than four years by staffers for the Joint Committee on Taxation, which has 30 days to review individual refunds and tax credits over $2 million. When committee staffers disagree with the IRS on a decision, the review is typically kept open until the matter is resolved.

BY THE NUMBERS: Regeneron Pharmaceuticals Inc. revealed how rare it was for anyone to get the experimental COVID-19 drug it gave Trump outside of studies testing its safety and effectiveness. The drug, which supplies antibodies to help the immune system clear the coronavirus, is widely viewed as very promising. Fewer than 10 of these requests have been granted, a Regeneron spokeswoman says. The drug is in limited supply, the priority is using it for the ongoing studies, and emergency access is granted “only in rare and exceptional circumstances,” she wrote in an email.

Barrett lived in house owned by co-founders of faith group