Electoral College vote a big step to move past election 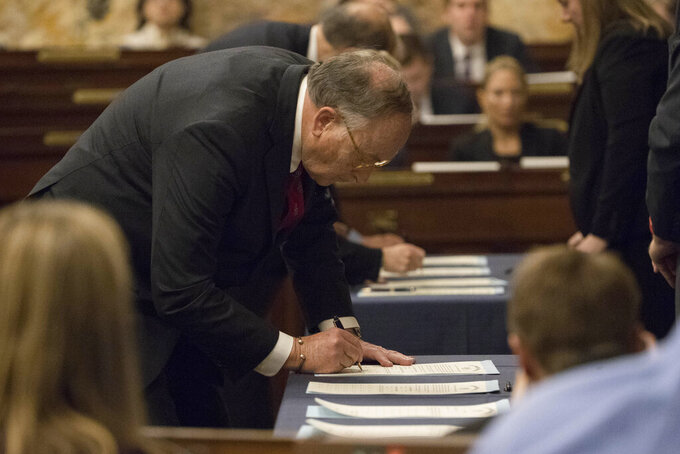 HARRISBURG, Pa. (AP) — When the 20 Pennsylvania loyalists selected by President-elect Joe Biden gather to cast their electoral vote ballots on Monday, it will be a big step toward leaving behind the chaos of the election and its aftermath.

The ceremony at the Capitol Complex in Harrisburg will be unusual not only for its pandemic restrictions, but also for its importance in officially anointing the president-elect amid a deluge of lawsuits and browbeating of state officials by President Donald Trump in an effort to overturn Biden's victory in the state.

The ballots signed by Biden's chosen electors on Monday are, under the U.S. Constitution, the real election.

“Monday is really the official vote for president of the United States under our Electoral College system,” said Edward B. Foley, a law professor and director of the election law program at Ohio State University. “Everything else up to this point is really in some ways a prelude to Monday.”

The electors' ballots are sent to Congress, where they are to be read into the official record by Vice President Mike Pence during a joint session on Jan. 6.

After Monday, Trump may still try to derail Biden's election. Given historical precedent, it's difficult to see how he would succeed under existing law, say constitutional law scholars.

Trump and Republican allies have tried, in various ways, to get the state's Republican-controlled Legislature to put up a majority vote to dispute Biden's victory in Pennsylvania and instead send Trump's electors to Congress.

Courts have refused those entreaties. So have the Legislature's Republican leaders, who say lawmakers delegated the authority of picking electors to voters under a nearly century-old law.

Michael R. Dimino, a law professor at Widener University's law school in Harrisburg, said the courts' role has been to ensure the law was followed in tabulating votes, certifying results and appointing electors, not the post-Electoral College process.

In any case, “no court has ever issued an order nullifying a governor’s certification of presidential election results,” lawyers for Pennsylvania Gov. Tom Wolf wrote in a filing Tuesday to the U.S. Supreme Court.

Wolf, a Democrat, certified the state's election for Biden on Nov. 24.

It is extraordinarily unlikely that Biden's hand-picked electors — Democratic Party officials, public office holders, organized labor allies and others — might go rogue and write in Trump's name on their ballot.

Pennsylvania has no law requiring electors to vote for the winner of the popular vote, as some states do. But Pennsylvania's rules for picking electors — allowing the candidate themselves to pick — are stronger than many other states'.

“I would be shocked if there were any faithless electors” in Pennsylvania, said Derek Muller, a University of Iowa law professor who specializes in election law.

One of Biden's electors, Pennsylvania's AFL-CIO president, Rick Bloomingdale, said he had not been contacted by Trump representatives hoping to change his mind.

“And maybe they know it would be fruitless to talk to me,” Bloomingdale said. “I’m not changing. I was for Joe, I am for Joe and I'll be for Joe on Monday.”

It’s an insurance policy to guard against Congress trying to manipulate the electoral votes that will be cast and sent to the Capitol for counting on Jan. 6.

Still, Trump loyalists could try to send their own electoral votes to Congress without the backing of any state authority or certification.

Trump’s attorney said in court papers that the campaign is asking his Wisconsin electors to do just that, in case a court intervenes in the meantime. A Trump elector in Pennsylvania, Lou Barletta, said Saturday that the same thing is possible in his state.

If that happens, under federal law, Congress must determine which electoral votes were sent under color of state law. The law points to Congress recognizing ballots certified by the state and bearing the governor's signature, Muller said.

Republican members of the U.S. House have signaled that they will object to slates of Biden electors from Pennsylvania and other states on Jan. 6. To force a two-hour debate on a state's electors, any senator must also sign paperwork formally objecting.

Preventing a state's electoral votes from counting requires a majority vote in both chambers — something that is also extraordinarily unlikely.

Pence is to read the states in alphabetical order and, by the time Pennsylvania gets a turn, lawmakers may be tired of debating.

“Pennsylvania has probably had the most political and legal controversy in this election," Muller said. “But it’s pretty low in the alphabet.”