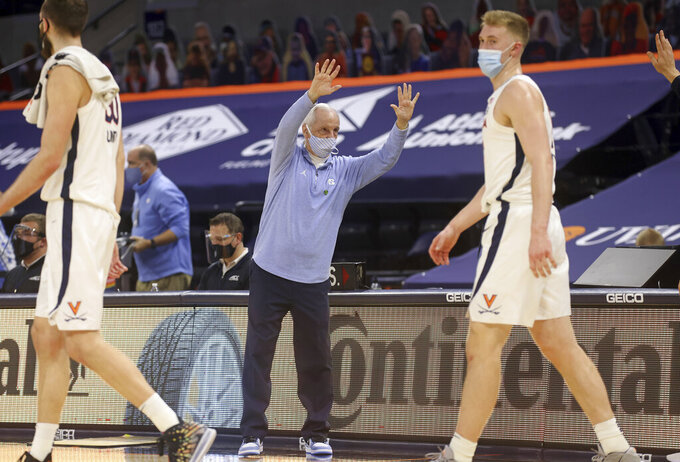 A pandemic that has wreaked havoc on the college basketball season is also reshaping the curve.

Perennial power Duke is currently bubbling. So is North Carolina. Kentucky is so far down it can't even see the bubble.

“The season hasn’t gone how we wanted it, but we just try to keep our head down and keep working,” Duke sophomore forward Matthew Hurt said. “Every day, don’t take a day off, not try to listen to the outside, the social media, what everyone else says but us.”

Duke entered the season with loaded expectations, as it always does. The Blue Devils had key holdovers from last year's team and coach Mike Krzyzewski brought in another stellar recruiting class.

Duke's season has mostly been a dud so far.

The Blue Devils are 8-8 and 6-6 in the ACC after beating North Carolina State on Saturday, a win that ended a three-game losing streak. Duke is No. 66 in the latest NET rankings — up 11 from the previous rankings — and needs a strong finish to the season to avoid missing the NCAA Tournament for the first time since 1995.

North Carolina fell flat with a chance at a resume-building win on Saturday, scoring 48 points in a loss to No. 9 Virginia. The Tar Heels failed to have a double-figure scorer for the first time since 1966, are 12-7 overall and No. 56 in the NET after going 1-6 in Quadrant 1 games.

Kansas (15-7, 9-5 Big 12). Once a blueblood appearing to be in trouble, the Jayhawks have reeled off three straight wins. Kansas has some big potential resume builders after facing rival Kansas State, with games against No. 7 Texas Tech, No. 13 Texas and No. 2 Baylor to close out the regular season.

UConn (9-5, 6-5 Big East). The Huskies picked up a critical win by beating Xavier 80-72 on Saturday without James Bouknight. UConn is a superb defensive team and if Bouknight is fully healthy, the Huskies could make a run to the field of 68.

Rutgers (12-7, 8-7 Big Ten). The Scarlet Knights were poised to reach the NCAA Tournament for the first time since 1991 before the tourney was canceled last season. Rutgers may still have work to do to end the streak this season, but it has won five of six after beating Northwestern on Saturday.

Oregon (12-4, 7-3 Pac-12). The Ducks were among the favorites to win the Pac-12, but they labored through injuries and two COVID-19 pauses. Oregon finally had its top five scorers on the floor together in a victory over Arizona State last week and has won three straight after beating Arizona in Tucson.

Maryland (10-10, 4-9 Big Ten). The Terps have wins over Illinois and Wisconsin but have been inconsistent most of the season. Maryland has lost three of four and could use a strong finish to get off the bubble.

Drake (19-2, 10-2, Missouri Valley). Less than two weeks ago, the Bulldogs joined No. 1 Gonzaga and Baylor as Division I's only undefeated teams. Drake then lost at Valparaiso and was blown out by No. 22 Loyola Chicago. A win over the Ramblers in the rematch on Sunday was huge.

Toledo (16-6, 11-3 MAC). A team on the NCAA Tournament bubble can't really afford consecutive losses late in the season. The Rockets did just that against Ball State and Bowling Green in their last two games.

Stanford (13-8, 9-6). The Cardinal have wins over Alabama and UCLA on their resume, but also have losses to Arizona State and Utah. They still have chances to pick up marquee wins with No. 20 Southern California and Oregon remaining.

This story has been corrected to show that Maryland had a victory over Illinois, not Rutgers.