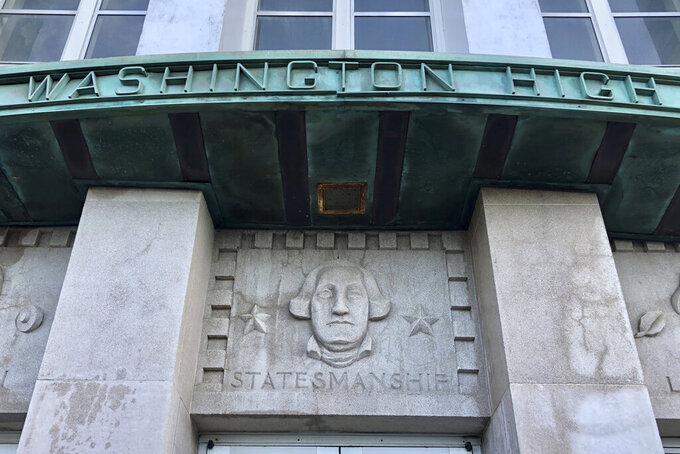 The main entry to George Washington High School is seen in San Francisco, on Jan. 27, 2021. The embattled San Francisco school board is poised to reverse a decision to rename 44 schools in an effort to avoid costly litigation and tone down national criticism. In a Tuesday, April 6, 2021, meeting, the board will vote on a resolution to rescind a controversial January decision to rename schools and revisit the matter after all students have returned full-time to in-person learning. (AP Photo/Haven Daley)

SAN FRANCISCO (AP) — The scandal-plagued San Francisco school board agreed to new contract terms with the district’s superintendent that require members to focus on reopening schools and act “in a dignified and professional manner,” the San Francisco Chronicle reported.

The agreement Tuesday was added to a deal Superintendent Vince Matthews made with the Board of Education to remain on the job for another year after he announced his retirement in March.

It follows board controversies including a much-criticized plan to rename 44 schools it said honored figures linked to racism, sexism and other injustices, numerous lawsuits and public outcry about getting children back into classrooms after months of online learning during the coronavirus pandemic.

The superintendent’s deal obligates board members to treat people with civility and respect, be prepared for public meetings and refrain from creating new programs or mandates unrelated to reopening schools, the budget or safety issues until in-person instruction has fully resumed.

The superintendent told the board that the contract language was not intended as a reprimand, the newspaper said.

“We, the governance team, myself and the board are a team bound by a shared vision and a commitments to our students,” he said. “The board and I are in agreement and have agreed that we will govern better together.”

Board member Jenny Lam spoke in support of Matthews, saying, “We really need to have our students at the center.”

The board recently suspended plans to strip schools of names ranging from U.S. presidents to Sen. Dianne Feinstein. The renaming effort was blasted for historical inaccuracies and shoddy research as well as poor timing.

The city of San Francisco also sued the school district and the board to pressure them to reopen classrooms more quickly.

And the board removed member Alison Collins from the role of vice president and her committee assignments because of tweets about Asian Americans dating to 2016. Collins in turn sued the district and five of her six colleagues for $87 million in damages.

The board on Tuesday selected member Faauuga Moliga as the new vice president.