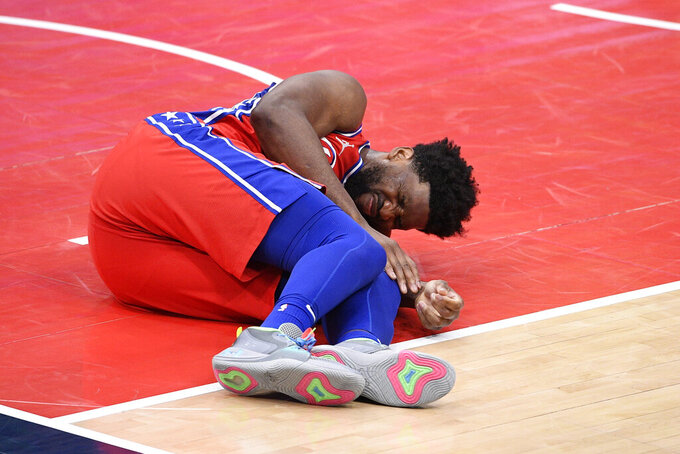 Philadelphia 76ers center Joel Embiid grimaces after an injury during the second half of the team's NBA basketball game against the Washington Wizards, Friday, March 12, 2021, in Washington. (AP Photo/Nick Wass)

WASHINGTON (AP) — On pace for their best season and first conference championship in two decades, the Philadelphia 76ers are suddenly “praying” for the health of their best player.

Joel Embiid scored 23 points but departed midway through the third quarter following an apparent leg injury in the 76ers' 127-101 victory over the Washington Wizards on Friday night.

Embiid, an MVP candidate for his role on the Eastern Conference-leading Sixers, was in his first game back following a week-long absence for contract tracing. He entered Friday averaging 30.2 points and 11.6 rebounds.

He had also grabbed seven rebounds before his exit with 6:20 left in the third.

“It looked like a hyper-extension. That's what we all hope it (is),” said fellow starter Tobias Harris. “We're just praying that he'll be OK and be healthy tomorrow.”

Following a dunk for his last points, Embiid landed awkwardly on his left leg, his knee joint appearing to bend slightly forward. He writhed in pain on the floor for several minutes, and a stretcher was briefly brought onto the court, but the center eventually limped off under his own power.

“We don’t do anything right now, because we don’t have any information,” Rivers said. “Listen, it’s a long season. At the end of the day, hopefully it’s not something where we lose him, obviously. But our guys will be good. We’ll be ready."

Even with Embiid's exit and Ben Simmons also out for contact tracing after both players were exposed to the same barber who tested positive for COVID-19, the 76ers cruised to a second straight comfortable win following the All-Star break.

Shake Milton scored 18 points off the bench for Philadelphia, which led by 17 after the first quarter, 10 at halftime and 18 after the third.

Furkan Korkmaz added 12 of his 18 points in the fourth quarter as the Sixers completed a three-game season sweep of the Wizards. Philadelphia outrebounded Washington 49-32, and had a 56-38 advantage in bench points.

“I thought our guys did a pretty good job focusing," Rivers said. "I thought it took us a couple minutes (after the injury) to get going, but once we did I thought we took care of the game.”

Russell Westbrook scored 25 points and Bradley Beal added 19 for the Wizards, who lost their second straight after the break and had their home win streak against the Sixers snapped at 10 games.

Wizards: Beal was a game-time decision due to left knee soreness. He shot 8 of 13 a game after his second-worst shooting night of the season, but was limited to 29 minutes as the game got out of reach.

Harris had 14 points and eight rebounds in 23 minutes before sitting for all of a non-competitive fourth quarter. After he missed out on Sunday's All-Star Game, finishing 13th overall in frontcourt voting, the forward says he has a point to prove

“When me and Doc talked about it, I just told him, ‘Look, I’ve got a bounty out for all the coaches that didn't vote for me. All the national media that skipped over me,'” said Harris, who entered averaging 20.3 points and 7.5 rebounds. “It is what it is. But me and Doc both discussed this. You make your name known in the playoffs. And leading this team and being solid what you do day in and day out, and that was my mentality.” SERIES-LY SPEAKING

Philadelphia's sweep was its first of Washington since winning all four of the teams' meetings in 2008-09. The Wizards last swept the 76ers in 2015-16.