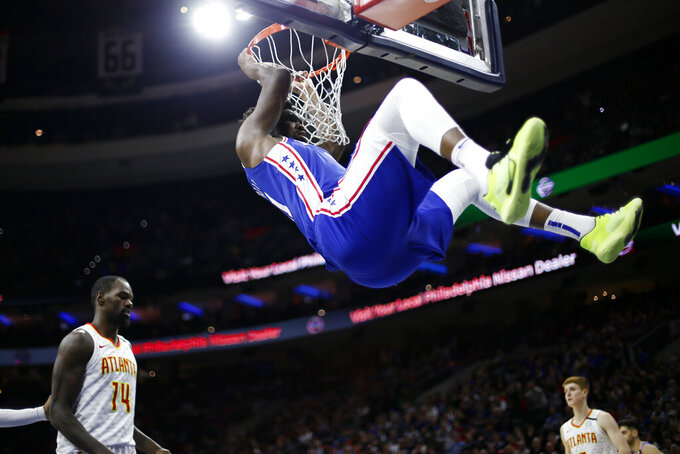 FILE - In this Feb. 24, 2020, file photo, Philadelphia 76ers' Joel Embiid, top, hangs from the rim after a dunk past Atlanta Hawks' Dewayne Dedmon during the second half of an NBA basketball game in Philadelphia. Embiid is hurting, and that's a cause for concern as the 76ers get set to restart their season this week. The All-Star starting center sat out Philadelphia's scrimmage against Oklahoma City on Sunday, July 26, 2020, with right calf tightness, something 76ers coach Brett Brown hopes is merely a minor blip. (AP Photo/Matt Slocum, File)

LAKE BUENA VISTA, Fla. (AP) — Joel Embiid is hurting, and that's a cause for concern as the Philadelphia 76ers get set to restart their season this week.

“I believe we’re just getting out in front of stuff and being smart with it,” Brown said.

Embiid has an extensive injury history, has never appeared in more than 64 games in a regular season and missed 21 of Philadelphia's 65 games this season before the season was shut down March 11 because of the coronavirus pandemic.

“It's an opportunity, truly — not coach-speak, not political-speak, truly — to play Al more, to put him with some different groups," Brown said. “I think if this had happened three or four games sort of into what we're calling the regular season, there's always frustration, selfish frustration and I know frustration at times for Joel."

Embiid played 13 minutes in Philadelphia's scrimmage opener against Memphis, shooting 3 for 10 from the field and leaving the game for good with about 4 minutes remaining in the second quarter.

“Just trying to be smart with everything and move on," Brown said.

The 76ers play their scrimmage finale against Dallas on Tuesday and open seeding-game play — essentially the restart of the regular season — on Saturday against Indiana. Philadelphia and Indiana are tied with the fifth-best records in the Eastern Conference going into the restart, each at 39-26 this season.

Boston's Kemba Walker and Phoenix's Ricky Rubio both missed the first scrimmages with their teams inside the NBA bubble last week.

They were back Sunday, going head-to-head in the Celtics-Suns scrimmage. Walker and Rubio were both in the starting lineup for the contest.

Walker missed the first scrimmage with left knee soreness. Rubio was a late arrival at Disney and the Suns wanted to get him a couple of more practices before he saw any scrimmage action.

The league is handing down one-day quarantines to players who forget to go to their designated locations for the daily coronavirus test — with Dallas' Kristaps Porzingis the latest to get that penalty.

Former First Lady Michelle Obama was scheduled to speak Sunday with NBA and WNBA players about the importance of voting — her remarks to those groups coming exactly 100 days before Election Day in the U.S.

“We're going to talk about the importance and making sure your voice is heard," said Oklahoma City guard Chris Paul, the president of the National Basketball Players Association.

Of the 22 teams at the NBA restart, nine took the day off — at least from formal practice, though that didn't mean players from those clubs couldn't shoot or work out in small groups or on their own.

Orlando, Sacramento and Brooklyn all were scheduled for practice.

The other teams at Disney — the Los Angeles Lakers, Los Angeles Clippers, Washington, Miami, Milwaukee, San Antonio, Utah, New Orleans and Denver — were down to take the day off.

All teams will play their third and final scrimmage game either Monday or Tuesday.