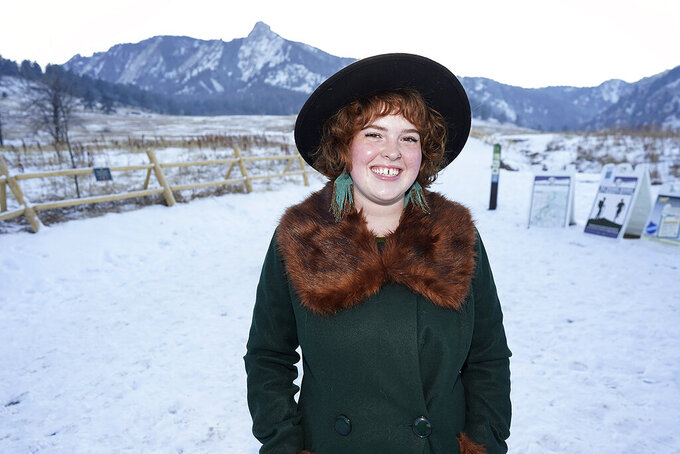 Bryleigh McCarty is shown in Chautauqua Park late Wednesday, Jan. 27, 2021, in Boulder, Colo. The 21-year-old, who has recovered from a case of a COVID-19, is working at a local school after losing her previous job—managing a yarn store—because of the effects on the economy because of the spread of the virus last year. (AP Photo/David Zalubowski)

CONCORD, N.H. (AP) — The coronavirus pandemic has been hard on both kids and adults. But what about those who are in between?

Demographic shifts during the last century have given rise to a distinct developmental stage called “emerging adulthood.” Spanning the late teens and early 20s, it’s a volitional, transitional period marked by exploration of life and love, work and world views. But with the now nearly yearlong pandemic disrupting education, employment, housing and more, young people who are no longer adolescents but not quite adults are struggling to find their footing.

An 18-year-old in Florida selected a college sight unseen. A 23-year-old in Texas lost his job in his ideal industry. And for a 24-year-old in New Hampshire, the pandemic halted hard-won social and academic gains.

“This generation is losing out on this key transition period,” says Kathryn Sabella, director of research at the University of Massachusetts Medical School’s Transitions to Adulthood Center for Research. She has been studying the pandemic’s effect on young people with mental health conditions and has found patterns of isolation, angst and uncertainty.

“We’re seeing a lot of stress about school, about finding a job in the short term, and longer term, what does this look like?” she says. “There’s a sense of despair and hopelessness.”

Emerging adulthood is a key time to explore careers, but the pandemic is putting that on hold. While some of Sabella’s study participants have picked up more hours in service sector jobs, others are struggling to work from home or are unemployed.

— Connor Payne, 23, of Austin, Texas, got laid off from his event planning job last week. Now, he's considering leaving that industry until the pandemic passes.

“Right now, I’m definitely sitting with the emotions and allowing myself to feel them,” he said. “But I have confidence in the future, I’m very hopeful.”

— In Redlands, California, 19-year-old Hans Westenburg also is hopeful he can stay on track with his plans to become a physician though he worries that the quality of his education has deteriorated since classes went remote.

“It’s not awful, but I do feel sort of grounded, like I can’t really explore my ambitions,” says Westenburg, a University of California-Irvine sophomore.

— Augustus Bayard, meanwhile, is just eager to start his college career. He arrived at Brown University from Anna Maria Island, Florida, this month — a delayed start for the freshman class that wasn’t announced until July.

“It’s an awkward point in your life to suddenly have to put your life on pause,” he says.

At Boston University, Hyeouk Chris Hahm is researching how the pandemic is playing out among young people who make up a significant chunk of the current and future workforce. Nearly half of her survey participants report depression, anxiety and loneliness, and an open-ended question that allowed participants to express anything on their minds produced a surprising torrent of negativity.

“People really needed to vent someplace or somewhere," she says. "They want to be heard.”

Jeffrey Arnett, the psychologist who coined the term “emerging adulthood” two decades ago, predicts this population will bounce back. While emerging adults tend to be pessimistic about society, they often are quite optimistic about their individual situations, he says.

“I wouldn’t diminish the difficulty of it," says Arnett, a visiting professor at Tufts University. "I just want to emphasize that they are resilient, and they’re at a point in life where you can recover from a year or even a two-year delay.”

Bryleigh McCarty, 21, says her life in Longmont, Colorado, got “10 times more stressful” when the pandemic hit, but therapy helped her discover inner strength as she switched from managing a yarn shop to working in a kindergarten class.

“It’s really easy to get caught up in those emotions of ‘Oh my god, everything sucks, I feel so discouraged.’ But I’m also really relishing my ability to sit back and laugh at everything that is going on,” she says. “I’ve learned that I am much stronger than I thought I was.”

But Arnett and other experts agree the pandemic poses particular challenges for some subsets of this population, including young people with serious mental illness.

Rates of mental health problems increase during this period, conditions become more complex and the most serious disorders emerge, yet this age group is less likely to seek and receive help. Maryann Davis, director of the Transitions to Adulthood Center for Research, surveyed state mental health systems between 2003 and 2005 about services for transition age youth, including mental health treatment, vocational support and help with housing.

Back then, any one service was available in at most in 20% of states. But by 2019, that percentage increased to 50%, according to a survey conducted by The Associated Press.

’Systems are finally seeing that the transition to adulthood is a critical developmental stage, that this is a real make-or-break period of life, and if we abandon young people right at the threshold of adulthood, they’re much more likely to fail,” Davis says.

Officials in several states say have seen increased demand for services during the pandemic but have had to curtail them or offer them remotely. While some say the pandemic has spurred lasting innovations, they also expressed concern about losing momentum for progress.

Busby, who is on the autism spectrum and lives with anxiety and depression, started last winter juggling two community college classes, making new friends and enjoying increased independence. She dropped a class when her school shifted to remote learning and she lost a tutor and other help. “I felt like I was being set up to fail,” she says.

But 10 months later, she offered this when asked what advice she’d give friends in similar situations.

“Keep on chugging along, don’t lose hope and remember that it’s okay to be struggling during these times,” she says. “Reach out and ask for help if you need it.”

Holly Ramer is a New Hampshire-based Associated Press reporter and recipient of the Rosalynn Carter Fellowship for Mental Health Journalism. Follow her on Twitter at https://twitter.com/hramer