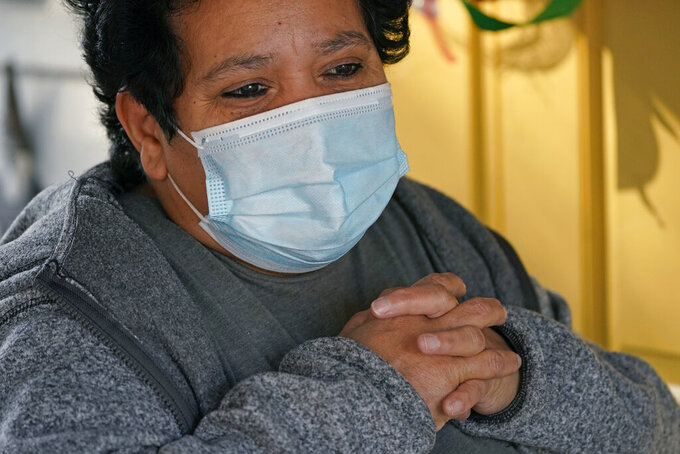 Evelyn Maysonet, 53, looks on as food is provided by Weber-Morgan Health Department Tuesday, Nov. 24, 2020, in Ogden, Utah. Maysonet has been isolating with her husband and son in their Ogden home since all three tested positive for COVID-19 over a week ago. None of them have been able to leave home to buy groceries so Maysonet said they were thrilled to receive the health department's delivery. (AP Photo/Rick Bowmer) 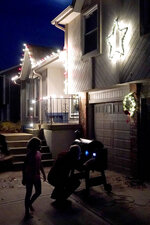 Vivian Zayas can’t keep herself from scrolling through photos of last Thanksgiving, when her mother stood at the stove to make a big pot of rice and beans and then took a seat at the edge of the table.

That was before anyone had heard of COVID-19 and before it claimed the retired seamstress. Ana Martinez died at 78 on April 1 while recovering at a nursing home from a knee replacement.

The family is having their traditional meal of turkey, yams, green beans and rice and beans — but Zayas is removing a seat from the table at her home in Deer Park, New York, and putting her mother’s walker in its place.

“It’s a painful Thanksgiving. You don’t even know, should you celebrate?” asked Zayas. “It’s a lonely time.”

The family is left with “an empty chair at the table forever," another daughter, Alexa Rivera, said Thursday.

Americans are marking the Thanksgiving holiday amid an unrelenting pandemic that has claimed the lives of more than a quarter of a million people in the United States.

Turkey and pies will still come out of ovens, football will still be on TV, families will still give thanks and have lively conversations about politics. But this holiday has been utterly altered after months filled with sorrows and hardships: Many feasts are weighed down by the loss of loved ones; others have been canceled or scaled back with the virus surging.

Zoom and FaceTime calls have become a fixture at dinner tables to connect with family members who don't want to travel. Far fewer volunteers are helping at soup kitchens or community centers. A Utah health department has been delivering boxes of food to residents who are infected with the virus and can't go to the store. A New York nursing home is offering drive-up visits for families of residents struggling with celebrating the holiday alone.

“The holidays make it a little harder,” said Harriet Krakowsky, an 85-year-old resident of the Hebrew Home at Riverdale in New York who misses the big Thanksgiving celebrations of years past and has lost neighbors and friends to the virus. “I cry, but I get over it. We have to go on.”

On any normal Thanksgiving Day, Kara McKlemurry and her husband would drive from their Clearwater, Florida, home to one of two places: his family’s home in another part of the state or her family’s house in Alabama. This year, McKlemurry informed her family there would be no visits. When her in-laws offered to stop by, the couple said no.

She and her husband didn’t want to risk infecting anyone or getting the virus themselves.

Not everyone followed McKlemurry’s example. Millions of Americans bought tickets to fly somewhere for the holiday, crowding airports despite pleas from officials to avoid travel and gatherings.

Still, McKlemurry, 27, wanted to do something unique to mark this unusual holiday — something to let everyone know that she and her husband still feel blessed this year.

So, a week before Thanksgiving, armed with colored pens and stickers of owls with scarves, she hand wrote notes of gratitude to every member of the family.

“We’re so grateful to have you in our lives,” she wrote on a card with a cartoon fox, “even if we can’t actually be together this year for the holidays.”

In the nation’s capital, the convention center is empty unlike in previous years, when volunteers have worked together to serve a meal to about 5,000 people. In the era of social distancing, the sponsored event had to be reimagined.

Ahead of the holiday, organizers delivered to 20 nonprofits 5,000 gift bags, each with winter clothing accessories, hand sanitizer and a mask, and 5,000 boxes that included a turkey sandwich with condiments, a side potato salad, a cookie and utensils.

From start to finish, Thanksgiving is different this year for Jessica Franz, a nurse who works the graveyard shift at Olathe Medical Center, in a Kansas City suburb.

For one, Franz, 39, is celebrating without her mother-in-law, Elaine Franz, who died of the coronavirus on Nov. 10, just one day before her 78th birthday. In previous years, her mother-in-law, who was Mennonite, would lay out a spread for her children and grandchildren. At Franz's work, in a typical year, co-workers would bring food for a potluck.

None of that is happening this year.

The family is shifting the festivities to Zoom and FaceTime. It’s been hard for her daughters — ages, 2, 8 and 11. Her middle daughter was exposed to the coronavirus at school and is quarantined until Dec. 3, and her oldest daughter is struggling with the concept of a scaled-back holiday.

“We had a good conversation that was, ‘This year may be different, and that’s OK. It is one year. If things are different this year and that means we get to see all the rest of our family next year, it is OK,’” said Franz, who has personally cared for patients dying of coronavirus.

The Thanksgiving gathering at David Forsyth's home in Southern California, meanwhile, comes with a uniquely 2020 feel: rapid virus tests at the door to decide who gets inside.

The kit costs about $1,000 for 20 tests, each of which involve pricking a finger and putting a drop of blood on a tray. Ten minutes later the results either show someone is negative, has antibodies or is positive.

Normally, about 15 to 20 people attend the family’s Thanksgiving dinner in Channel Islands Harbor. But this year, it will only be eight of them: Forsyth, his wife, her four adult sons and the partners of two of them.

His wife started cooking Tuesday. She’s planning a cold cucumber soup for a starter and bunch of appetizers for the early afternoon meal. The sons are bringing side dishes. Turkey and the fixings are the main course. Champagne may be cracked.

Forsyth hasn’t seen his family much during the pandemic but wanted to save the holiday.

“People are trying to live a normal life," he said. "And, you know, with the second wave coming now, it’s not a bad idea to be prepared.”

Kerry Osaki longs to see his now-grown children, without masks, and hug them. But instead he and his wife are celebrating just the two of them after their traditions were upended.

Osaki's 93-year-old mother, Rose, who lived with the couple in Orange County in California, died from the virus after all three got sick.

With his mother gone, Osaki, 67, and his cousin decided to pass on the family's annual Thanksgiving get-together. His wife, Lena Adame, typically spent the holiday cooking a spread of turkey and stuffing with her relatives — but some had seen virus cases at their workplaces, so the couple decided to skip that, too.

“It’s just been a long, rough and sometimes sad year,” he said.

In Ogden, Utah, Evelyn Maysonet stepped out of her home Tuesday morning to find boxes overflowing with canned goods, desserts and a turkey. She has been isolating with her husband and son since all three tested positive for COVID-19.

None of them has been able to leave to buy groceries, so they were thrilled to receive the health department’s delivery — and the chance to cherish the things that matter most.

“As long as you have a life and you’re still alive, just make the best of it with you and your family,” Maysonet said.