Empty stadiums for soccer games? It's not quite that simple 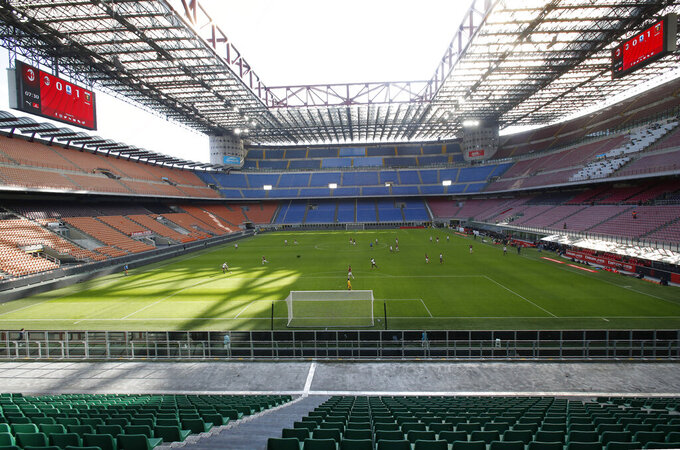 FILE - In this Sunday, March 8, 2020 file photo, a view of the empty San Siro stadium during the Serie A soccer match between AC Milan and Genoa, in Milan, Italy. The Italian soccer players' association rejected a proposal from Serie A clubs Monday to reduce salaries by a third if the season does not resume as "unmanageable." The guideline austerity measure was agreed on by 19 of the 20 clubs, the Italian league announced, with Juventus not included because it already finalized a deal with its players to relieve financial pressure on the eight-time defending champion amid the coronavirus pandemic. (AP Photo/Antonio Calanni, File)

It will soon be the new norm, a cold and often unnerving sight that soccer and many other sports will have to get accustomed to over the coming months.

But will these stadiums actually be empty? Far from it.

“It’s not about 22 players walking onto a pitch and (kicking) a ball about,” FIFA vice president Victor Montagliani told The Associated Press, referring to what he called the “phased-in approach” that soccer — and society as a whole — will need to take to get back to normal following the coronavirus outbreak.

Some teams in Europe have experience in staging games without flag-waving and loudly cheering fans — be it while serving a punishment for crowd trouble or, as was the case in February and March, because of a rapidly spreading virus that turned into a pandemic.

Now, almost every club will be planning for such a scenario as soccer leagues start to ramp up preparations for a resumption which will be staggered depending on how well countries have managed to contain the virus.

Of Europe’s major leagues, Germany appears to be closest to lifting its suspension, with some state governors even hoping to resume games on May 9. The Bundesliga is planning to have a maximum of 213 people in the stadium — everyone from players to TV cameramen.

In Britain, which is in the peak of the virus outbreak, a return in late June is the possible — albeit optimistic — call from clubs in the Premier League. One leading club official spoke of the need for at least 300 people at matches.

In Sweden, where soccer authorities are planning for a June 14 restart, a venue official at champion Djurgarden told the AP that it would be possible to limit numbers to 50 if fans aren't allowed in stadiums. In Switzerland, leaked plans attained by daily newspaper Blick this week stated there should be no more than 200 essential staff at games.

Much depends on the directives from governments and the demands of domestic and international broadcasters, whose money clubs increasingly rely on.

Players and match officials obviously are on the list. Each squad for a match has 18 or 20 players in major European leagues, and some back-ups will be required in case of late withdrawals. There is a four-person team of match officials (referee, two assistant referees and a fourth official), along with a replacement official.

Other essential people include a match delegate, an anti-doping official, official photographers and staff from broadcasters (like sound engineers, technicians, camera crew and producers), and medical workers. In England, for example, there needs to be four paramedics and an ambulance driver at every game.

In a list provided by the Spanish league while it planned for games without fans in March, other groups getting stadium access included both teams’ board of directors, community managers, integrity officials and what it termed “technical staff with functions strictly related to holding the games,” which could be a group of up to a maximum of 100 people. That could include caterers, ground staff, ball boys and girls, maintenance, ground-safety officers, people who run advertising hoardings and stewards.

The number of journalists attending would vary from country to country, but that could easily be slimmed down. However, what's unlikely to be altered is the TV set-up for top European competitions that generally uses between 10 and 15 cameras, plus technicians and interviewers for the host broadcaster.

Tomas af Geijerstam, head of matches and venues at Djurgarden, said if a game was restricted to 50 attendees, as mass gatherings in Sweden currently are, the number of coaches needed could be shrunk, fewer ball boys could be used and press could be limited. He said two locker rooms could be used by each team.

“We can manage a match with 50 people,” af Geijerstam said. “We have to if we want to play.”

Games can still attract a crowd even when spectators are not in the stands.

Thousands of fans gathered outside the empty Parc des Princes to celebrate a Paris Saint-Germain win over Borussia Dortmund in the Champions League on March 11, tightly packed together and waving flares. Players went to celebrate with them.

So, any game played in an empty stadium still will need security guards or police posted around the venue to stop people from gathering. Information from Spain included the need for “public and private security agents,” firefighters and first-response personnel.

Some public officials have expressed concern about people crowding together for TV viewing parties. Liverpool manager Jürgen Klopp made similar comments before the shutdown.

BEFORE AND AFTER MATCHES

There’s also the question of what players do away from the stadium.

Germany is proposing coronavirus tests for players before each game, which risks a public backlash. The league says it would use “less than 0.5%” of the national testing capacity, but that still means thousands of tests to finish the season.

The deputy head of Germany’s public health body has criticized the plan, saying that tests should be reserved for people who have symptoms or are suspected to be part of an outbreak.

The National Rugby League in Australia has come up with its own idea. Its “Project Apollo” think tank proposed making players live on a remote island camp. No soccer league has yet tried to copy that plan.